Monday morning I woke up. Since I wasn’t wasting so much time messaging guys on Grindr, I felt so much freer. I had no idea how much time I spent searching and complimenting guys on their torsos in hopes they’d see something they’d like and allow me to ask them out on a date.

I was also thrilled since I got to sleep in my own bed the night before. My parents came to visit for Easter weekend, and I gave them my bed. Sunday night, they offered to get themselves a hotel room so I could get a decent night’s sleep for work Monday. After I dropped them at their hotel with my sister, I came home and passed out. I love my parents, but I was happy to have my place back again. I’d spent the weekend playing tour guide. It was exhausting.

Even though I wasn’t sending out messages on Grindr didn’t mean I wasn’t checking them. I fired it up to see if my prince charming would ask me out on a date. I found quite the opposite. I blocked a fair amount of guys before I found an interesting message. I spent the weekend being celibate. One of the guys on Grindr seemed pretty normal and chill. We began to chat a bit before he offered to blow me. Like that, I was back in it. I had done such a good job of staying away from the simple Grindr stranger hookups, but I was horny after a weekend of being good. I made an exception of course and accepted his offer to blow me. What harm was there? I could enjoy myself before work and have a great day. “Sure,” I said in reply.

I gave him my address, and he drove over to my place on his way to work. I quickly hopped in the shower. He buzzed, and I called him up to my apartment. I quickly dried off and got dressed. When he got to the door, I brought him right into my room. I was wearing gym shorts and a tank. We made our way to my bed, and I sat down. Just then, he looked at me and said, “Sorry bud. I’m just gonna go.” With that, he turned around, sped out my door and left without another word.

I felt so rejected. What was it about me that scared him off. He made it all the way to my bedroom before darting. Was I that repulsive? Why the sudden change of heart!? I felt so dejected! My self-esteem shot down to an all-time low. This had never happened to me, and I suppose it was karma for all my Grindr trysts. It was bound to happen at some pont. I thought about all the times I wanted to do what he did and didn’t. I’d always regretted not standing up and walking out, but suddenly I no longer regretted it. I would have put those guys in a tailspin like I was going through. I did have to respect him honesty however. It was a catch 22.

That night I had a date scheduled with a guy I’d been chatting with for over a year. We met through Grindr and tried to grab drinks before I met N, but when I started dating him, things fizzled out. We chatted periodically on AIM, but nothing ever materialized. I even contemplated making a career shift to event planning, which this guy did, but we were never able to get together to talk about it. We simply kept it to a digital relationship. When things with Smiles ended, I began to look back at the guys I’d been chatting with. I hit him up and asked him out.

We made plans to meet at Ariba Ariba after work for margaritas and a bite. During the day, I stalked him a bit on Facebook. I noticed he was a camera whore. He took so many pictures in so many gay bars. He was totally a part of the scene. He was a fixture. I worried this would be a roadblock, but I was still optimistic. Maybe I could learn to love it.

I arrived ahead of him and waited on the corner. When I saw him arriving, I noticed how attractive his smile was, followed by how short he was and how “fun” he dressed. He was very cute. We awkwardly said hi and made our way inside. He asked if I was hungry, and I told him I hadn’t eaten, so we agreed to grab dinner on top of drinks. We were seated at a tight table and settled in.

We mainly began talking about work. It was very awkward. Considering we’d chatted so often online, you think we’d have been able to jump right in — Not the case. There were so many awkward pauses. I was struggling to find topics to talk about with him. He wasn’t exactly spurring the conversation on.

We started to talk about TV and what we watch. I thought that would be a safe topic and would spur further conversation. That only led to learning we had very different entertainment tastes. He watched a lot of Bravo TV like Housewives of… and other shows of the same ilk. I was more into the mainstream network TV. I wanted to have more in common with him, and I could tell he did too based on comments, but it was a bit of a struggle. I asked so many more mundane questions followed by mundane answers.

We ate our meals while we talked, but it was far from a great dinner. It was pleasant. The food was good, but there was no flow to the date. I was ready for it to be over. I was a bit disappointed since I thought we’d get along swimmingly. We just didn’t have good chemistry. 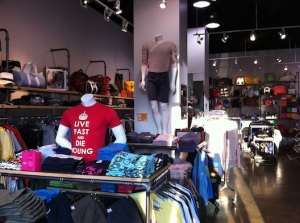 When we finished, we paid the bill and made our way out. We began walking through Hell’s Kitchen south together. He lived that way, and I was headed to the bus. When we got to a shop along the way, Tagg, he needed to run in and grab something for a friend’s birthday. I went in with him since I had nowhere to be. We had some fun chatting about random things in the shop. He made his purchase, and we continued south. When we got to his intersection, we exchanged a kiss goodbye, and he made a comment about hanging out again sometime. I agreed, but in my mind it would be under a friendly premises.

We texted afterwards, but was pleasantries and formalities. We exchanged that we each had a nice time, but that would pretty much be the end of us.

This entry was posted on May 21, 2012, 10:00 AM and is filed under Gay Dating. You can follow any responses to this entry through RSS 2.0. You can leave a response, or trackback from your own site.