From an early age, I was different. Looking back, I exhibited many of the typical gay indicators growing up. I watch home movies of myself, and I notice a certain flamboyance that makes me cringe a little inside. Ironically, the typical male/female roles are quite reversed in my family. My sister is a hardcore football fan, and I’m much more of the artistic/design/film oriented one. While I did very well in school and sports, I was always on the more artistic side of the spectrum. Growing up, I wasn’t bullied or picked on a great deal. However, I can remember a few instances of being called gay, but it was more in the generic lame delineation kids use versus a homosexual connotation.

I don’t know when I discovered my attraction to men, but I remember paying more attention to the men than the women in my uncle’s porno mags around the age of 12. At that age, I thought it was something I could suppress or get over as I got older. I thought it was just a secret I would take with me to the grave. I even had a long-term relationship with a girl through my junior and senior year. While I strongly appreciate my upbringing on a farm in the rural Northeast of the United States, I knew it wouldn’t be my home forever. I knew I needed to branch out.

My sexuality was questioned on more than one occasion in college, at times publicly, and I denied my attraction to men every time. I compelled my accusers to point out any time they saw me doing anything inappropriate with another guy or even an instance where they caught me checking out another man. I think I even started to believe the web of lies I was spinning at one point.

After I graduated, I moved to Hoboken, NJ in the shadow of NYC. Every weekend I went to the bar unsuccessfully pursuing women. I was alone, and I wanted a relationship desperately. There were a few hookups and make out sessions, but nothing that lasted. I spent a lot of time in online chat rooms and eventually forged a strong connection with another man. So, at the ripe age of 26, I came to the life-changing conclusion and finally admitted to myself my true self — A gay man. This by no means defines me, but it is a part of me and a part of who I am. 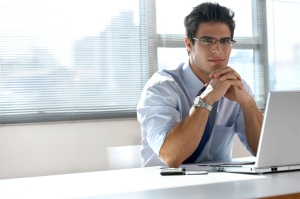 I don’t like to define myself as gay and even struggle to say the words “I’m gay” out loud. I feel we are all on a spectrum. No one is 100% gay. No one is 100% straight. And, no one is 100% bi. I still find women attractive, but they don’t excite me like a man can. I fall just right of center on the gay side of the spectrum — I yearn for male companionship and sexuality over the relationships I forge with women.

Since then, I’ve been riding the roller-coaster known as the New York City gay dating scene and sleeping with the city that never sleeps. This blog is an anonymous account of my dating life in NYC and what happens next…