Sunday, I made plans with my Superman — My Clark Kent. I was very excited and could hardly wait.

I barely knew him, but I could already tell we were quite a match. On top of that, we weren’t even done the first date before he planned to see me again. It was his suggestion for us to catch The Hunger Games Saturday morning while we had breakfast.

I texted him and invited him to come over to Hoboken. We would take the motorcycle out for a ride before the movie. I ran a lot of errands that morning in anticipation of his arrival later in the afternoon. As the day progressed, the weather looked like it would cooperate less and less. The sky was covered with clouds and the wind picked up significantly. It looked like it would rain any minute.

I texted CK and suggested we hold off on the ride, and I just come into the city to see the movie. It would make things less complicated, and it would give him something to look forward to in the future.

He agreed with the new plan. I met him at his apartment with plenty of time to catch the movie. He suggested we hit up the rooftop since I didn’t get to see it the first time I was there. How could I say no to that? When I got to his apartment, we went directly up to the roof. We spent time checking out the sights, cuddling and taking pictures like we’ve been a couple for a year already. I was crushing hard!

We sat and talked, and he suggested we catch a later showing so we could relax and not have to rush to the theater. I wasn’t going to object to anything at this point. I was so happy. I was just going to go with the flow.

We finally made our way to the theater. He insisted on buying my ticket. I protested since there was no reason I couldn’t pay for myself, but he continued to insist. He wanted this to be his treat. I relented, but was sure to pick up the tab for the pretzel bites and soda.

We made our way into the theater and got great seats. Almost immediately, the PDA began between us. It wasn’t gag yourself PDA. We were simply holding hands or caressing each other’s arms. It was my kind of PDA. I was quite enjoying myself!

When the movie was over, we made our way to the street and discussed the film while we walked. This was his second time seeing the movie. He expressed interest in reading the book, and I strongly encourage him to. I was already part of the way through the second book in the series of three.

We held hands while we walked and at times put our arms around each other. I could hear a lot of people making comments, and some even began to shout or hoot and holler at us. A few of the comments were jeers and a few were shouts of support. This was not something I was used to, but it was something I would have to learn to shrug off. I’d walked through the city being affectionate with other guys before, but it never gathered this type of reaction. At one point, CK acknowledged the comments, asking, “Are they still honking at us?” I told him I thought so, and we kept walking. Frankly, I was a little surprised by it all. We were in midtown west — Smack dab between Chelsea and HK, two of the gayest neighborhoods in NYC. I had a feeling a lot of the commenters were out-of-towners, and many of them were young guys.

When we got away from the crowds, he commented how he liked how I was into the hand holding. “Not all guys are into it. I’m glad you like it,” he added. I told him I liked little signs of affection, but I wasn’t into the far more obvious public displays. I told him I’m not much for making out in public.

He also mentioned the idea that had we planned better, I could have brought clothes to wear to work the next day and spent the night, however, he was happy we weren’t taking things for granted. He was happy with the pace of things, even though he wouldn’t have been opposed to sharing his bed with me. 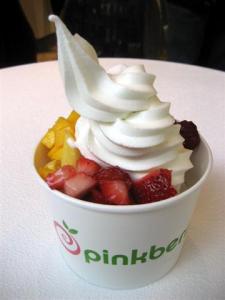 We stopped by Pinkberry on the way back to his rooftop as per his request. We ordered ice cream and shared spoonfuls with each other as we walked up the street. When we got back to his place, we headed straight to the roof.

We laid on one of the outdoor couches together and got comfortable while we ate our ice cream. We talked for a while before we ended up making out. Things stepped up to the next level when he undid my belt and began orally pleasuring me with one eye on the door. It was risky but I wasn’t fully exposed. I liked his passion and excitement. I’d finally met my match in terms of a decent, normal guy with a healthy sexual appetite.

After some time, he asked, “You wanna continue this downstairs in my apartment?” I told him I was totally game, and we descended the stairs.

Warning: The following may be too graphic for some. It wasn’t long before we were both naked in his bed. There was significant foreplay before he asked if I wanted to penetrate him. I was completely engulfed in our passionate romp and nodded my head in definitive agreement. “Yes! Like no other!” I added.

Then, I’m not sure how things switched so quickly, but as I was grinding on his backside, and stopped to put on a condom, he turned to me and said, “Can I f*ck you?” A long time ago, I made a rule for myself I would not bottom for a guy unless we were in a relationship. It wasn’t something I really enjoyed, so only special guys would receive the privilege. I had very strong feelings for him. I wanted to share something special with him already. I could hear A’s voice in my head telling me no sex until the third date, but that voice in my head was no comparison to the passion of my other head. After all that thinking, I said, “Yes.”

Like that, he started making out with me, and he had me on my back. While we were making out, I set the open condom down on the bed. He was already putting it on. I thought he was going to top me after I topped him. I didn’t realize I was giving up my position first. I was a little disappointed, but I let it happen anyway.

I told him it was a very long time for me since any guy had been inside me. I told him he’d have to go VERY slow. He began to slide in when I gripped his leg and implored him to stop. He told me to relax and just hold it there, but I insisted he pull out. I needed a break before we could continue. I know he thought it would be better if he simply held it there, but I was being painfully stretched. He wasn’t exactly a small guy — Quite the opposite. He pulled out, and I could see the disappointment on his face. He thought that was it, but I wasn’t giving up that easily. I just needed a second to relax again. He began kissing me in a caring way. It was as if it was his way of saying, “I never want to hurt you again.” When I regain composure, I directed him to begin again. Delight spread across his face at this news.

This time was much easier. He slid in with no problem, and began gyrating. It’d been some time since my prostate was stimulated like that, so part of it was discomfort and part was unexplainable pleasure. I never finish from bottoming, but I always have a full-body experience. I rarely can walk afterwards — Not because I’m so sore but more so because my legs go limp.

He continued until he was close, pulled out, ripped off the condom and shot all over my chest. It was very hot to watch him explode with gratification. He expressed how great everything felt, and we both laid there incapacitated. He told me how awesome he thought it was that I would flip so readily and let him top me. I told him I thought it was the best way for any healthy relationship. Both partners get to experience it all. Even though I didn’t always enjoy bottoming, I found it to be the ideal situation.

We cuddled for hours after that. We even dozed off for a period. When I woke, it was two am. I checked the schedule for the next PATH and made sure I was on it at 2:30. I said goodbye to him with a very passionate kiss, and we talked about when we’d get to see each other next. It was clear I couldn’t get enough of him. Now, the question was, did he feel the same way about me?