Monday morning I woke up. Since I wasn’t wasting so much time messaging guys on Grindr, I felt so much freer. I had no idea how much time I spent searching and complimenting guys on their torsos in hopes they’d see something they’d like and allow me to ask them out on a date.

I was also thrilled since I got to sleep in my own bed the night before. My parents came to visit for Easter weekend, and I gave them my bed. Sunday night, they offered to get themselves a hotel room so I could get a decent night’s sleep for work Monday. After I dropped them at their hotel with my sister, I came home and passed out. I love my parents, but I was happy to have my place back again. I’d spent the weekend playing tour guide. It was exhausting.

Even though I wasn’t sending out messages on Grindr didn’t mean I wasn’t checking them. I fired it up to see if my prince charming would ask me out on a date. I found quite the opposite. I blocked a fair amount of guys before I found an interesting message. I spent the weekend being celibate. One of the guys on Grindr seemed pretty normal and chill. We began to chat a bit before he offered to blow me. Like that, I was back in it. I had done such a good job of staying away from the simple Grindr stranger hookups, but I was horny after a weekend of being good. I made an exception of course and accepted his offer to blow me. What harm was there? I could enjoy myself before work and have a great day. “Sure,” I said in reply.

I gave him my address, and he drove over to my place on his way to work. I quickly hopped in the shower. He buzzed, and I called him up to my apartment. I quickly dried off and got dressed. When he got to the door, I brought him right into my room. I was wearing gym shorts and a tank. We made our way to my bed, and I sat down. Just then, he looked at me and said, “Sorry bud. I’m just gonna go.” With that, he turned around, sped out my door and left without another word. 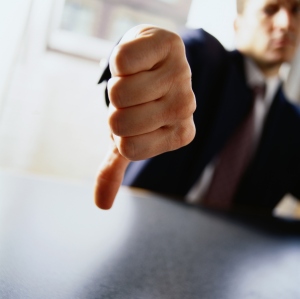 I felt so rejected. What was it about me that scared him off. He made it all the way to my bedroom before darting. Was I that repulsive? Why the sudden change of heart!? I felt so dejected! My self-esteem shot down to an all-time low. This had never happened to me, and I suppose it was karma for all my Grindr trysts. It was bound to happen at some pont. I thought about all the times I wanted to do what he did and didn’t. I’d always regretted not standing up and walking out, but suddenly I no longer regretted it. I would have put those guys in a tailspin like I was going through. I did have to respect him honesty however. It was a catch 22.

That night I had a date scheduled with a guy I’d been chatting with for over a year. We met through Grindr and tried to grab drinks before I met N, but when I started dating him, things fizzled out. We chatted periodically on AIM, but nothing ever materialized. I even contemplated making a career shift to event planning, which this guy did, but we were never able to get together to talk about it. We simply kept it to a digital relationship. When things with Smiles ended, I began to look back at the guys I’d been chatting with. I hit him up and asked him out.

We made plans to meet at Ariba Ariba after work for margaritas and a bite. During the day, I stalked him a bit on Facebook. I noticed he was a camera whore. He took so many pictures in so many gay bars. He was totally a part of the scene. He was a fixture. I worried this would be a roadblock, but I was still optimistic. Maybe I could learn to love it.

I arrived ahead of him and waited on the corner. When I saw him arriving, I noticed how attractive his smile was, followed by how short he was and how “fun” he dressed. He was very cute. We awkwardly said hi and made our way inside. He asked if I was hungry, and I told him I hadn’t eaten, so we agreed to grab dinner on top of drinks. We were seated at a tight table and settled in.

We mainly began talking about work. It was very awkward. Considering we’d chatted so often online, you think we’d have been able to jump right in — Not the case. There were so many awkward pauses. I was struggling to find topics to talk about with him. He wasn’t exactly spurring the conversation on.

We started to talk about TV and what we watch. I thought that would be a safe topic and would spur further conversation. That only led to learning we had very different entertainment tastes. He watched a lot of Bravo TV like Housewives of… and other shows of the same ilk. I was more into the mainstream network TV. I wanted to have more in common with him, and I could tell he did too based on comments, but it was a bit of a struggle. I asked so many more mundane questions followed by mundane answers.

We ate our meals while we talked, but it was far from a great dinner. It was pleasant. The food was good, but there was no flow to the date. I was ready for it to be over. I was a bit disappointed since I thought we’d get along swimmingly. We just didn’t have good chemistry.

When we finished, we paid the bill and made our way out. We began walking through Hell’s Kitchen south together. He lived that way, and I was headed to the bus. When we got to a shop along the way, Tagg, he needed to run in and grab something for a friend’s birthday. I went in with him since I had nowhere to be. We had some fun chatting about random things in the shop. He made his purchase, and we continued south. When we got to his intersection, we exchanged a kiss goodbye, and he made a comment about hanging out again sometime. I agreed, but in my mind it would be under a friendly premises.

We texted afterwards, but was pleasantries and formalities. We exchanged that we each had a nice time, but that would pretty much be the end of us.

My Friday off was certainly an eventful one. I spent the better portion of the afternoon planning and participating in my first real threesome. I was already starting to judge myself and question all my recent behavior. A large part of me knew this was not who I was. I was completely acting out, but another part of me realized these were my gay “formidable years.” I never hooked up with guys in college while all my male friends were taking girls home from the bar. This was my wild time. Basically, I was giving myself license to have emotionless sex for sport.

That being said, I was still searching for the guy who would get me off Grindr and be the reason to settle down. I’d already gone on one good date with Chelsea. He asked what my plans were for the evening. I told him I had none since I had the day off, and he asked if we could do something together. I didn’t feel like doing anything crazy or going out, so I requested a lazy night in and suggested he come to my place. “Cuddle night?” he replied. “Definitely,” I said.

I still felt a little disgusted with myself for my afternoon behavior, but I also hoped maybe he could help distract me. He would certainly be something to get my mind off it. I took all my sheets off my bed and threw them in the washing machine. I hopped in the shower once again. I needed a cleanse.

I texted him back and told him I would make us dinner, and we could watch a movie. He agreed that sounded like a great idea, but he told me he’d already eaten. I made myself something quick before he came over.

“Do I have to come back to NYC late by myself?” he added. I told him he could certainly spend the night. In fact, I would very much enjoy that. He tried to convince me to come into the city, but I wasn’t about to budge. I’d already done one date in his neighborhood. I didn’t want to go into the city that evening since I wasn’t already there for work. He painted a better picture of what I was asking him to do: “Mind you, I don’t even go see my friends in Brooklyn. So this better be scoring me some hefty points! Haha! LMAO. You can ask my friends how much of a NYC snob I am. I’m like who? What? Why? Do I need a passport? And does Jet Blue fly there?” I quickly responded, “This isn’t my first rodeo. You’re not the first guy I’ve stolen out of the city.” Every guy I’ve convinced to come over to Hoboken has fallen in love with it and become an advocate. I am slowly introducing the NYC gay community to the great city of Hoboken one gay at a time :).

He agreed to stay over, as long as we agreed to behave. I told him I had no problem with that, and I appreciated him wanting to take things slow. I was very surprised by this, considering we met on Grindr, and I learned he’d done the hookup thing more than a handful of times.

When he arrived, I got him some comfortable clothes to wear, and we settled in on the couch with a few refreshments. We went through the guide trying to find a movie to watch. Finally, we settled on Drive, with Ryan Gosling. We laid on the couch with him in my arms the entire film. It was nice to snuggle with a man. It was very romantic. We both thoroughly enjoyed the movie, and when it was over, it was decently late. We decided to head to bed.

I found it adorable he didn’t take his shorts and shirt off when we went to bed. I don’t exactly sleep naked, but I have a hard time sleeping with clothes on. I find them restricting. I stripped down to my boxer briefs and encouraged (playfully removed the shorts I lent him) him to get comfortable before spooning with him a little. He warned me about getting too fresh, but I told him to relax. “I’m just trying to cuddle, not rape you. Stop fussing,” I jokingly stated. He did relax, and we got into a comfortable spooning position before finally dozing off for the night.

That night, neither of us slept very well. He was a thrasher and constantly woke up. I didn’t mind too much because I didn’t have anything to do the next day but lounge around. It was nice change to be sharing my bed with such a sweet guy. This had potential, and we certainly weren’t rushing things…