After my lukewarm date with the doctor, I was ready to get back out there in search for a man.

I’m happy to report, which I’m sure some of you may have suspected otherwise, I was doing a great job of staying off Grindr. Granted, it was a short period of time, but I was thoroughly proud of myself. I felt like I’d joined GA. Every day not having meaningless sex was another day of Grindr sobriety.

Tuesday after work, I arranged another date with Southern Drawl. The last date was a bit crazy. Footsie under the table. Shenanigans in the bathroom. I was curious if he’d be able to behave this time or would he be looking for another quick trip to the bathroom.

We texted during the day to lock things down. I proposed The Breslin. I’d always loved their food, their drinks and their ambiance. He shot the idea down because he said the place was always full of hipsters. I had always been a fan of Sala 19 in the Flatiron District, so I proposed we go there for dinner. It worked out well because it was halfway between our offices. He agreed.

I had to wait at work for him to finish. When he did, I made my way south to meet him. I met him on the street corner, and we walked to the restaurant. 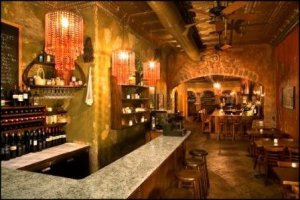 Dinner was very nice. He was well-behaved, and the conversation was good. I told him about my allergist appointment, and he told me about his day. We talked frankly about our last date. We discussed what went on. I learned he’d never done anything like that before. I was also learning about the guys he’d dated since living in New York City. When we originally spoke on the phone, I was under the impression he was new to the gay world. I thought he’d never really dated anyone before. Now, I was learning about all the guys he dated in NYC, as well as the guy he dated through college that he said I so strongly reminded him of and resembled. It was a bit unsettling.

In the middle of dinner, he told me he’d ended things with the guy he was seeing. He explained they’d only been seeing each other for two weeks, and things were never that strong. When I probed him to ask if he left the other guy because he met me or if he did it because he wasn’t satisfied with the previous guy, he told me it was the latter, but part of it was also due to meeting me. A big red flag went off in my head. Would he leave me for a better model?

I still wasn’t sure about him. I liked talking to him. I liked being with him. He was smart. He was nice. He wasn’t flamboyant, however, I wondered if maybe he was too “straight.” He was a bit homophobic. I’m not the most open about my sexuality. I’m not out to everyone at work. I don’t openly advertise my sexuality. However, if he wasn’t comfortable with himself, how could we be comfortable with each other. I couldn’t be sure about him. Was he right for me? I had no idea. Only more time could tell. I was keeping a distance as we moved forward. We had a connection, but was it strong enough to last? Was it what I wanted?

In our conversations, his southern entitlement shined through. It was an incredible turnoff. Where was the southern charm I’d seen so many times in movies. When I think of the ideal man, I think of Matthew McConaughey. He definitely has an ego and self-confidence, but he also exudes charm and sexuality. His confidence is not in your face, and he seems down-to-earth. Southern Drawl fit the other Hollywood archetype — The Southern plantation owner. He had an air or superiority that was hard to swallow. Many times, he laughed off these comments, making them seem like a joke, but I wondered if there was really something deep down that was more genuine. I wasn’t ready to date a snob. That $hit wouldn’t fly with me. I wasn’t going to let him get away with it, and I’d already started calling him on it.

When we finished eating, we split the bill and walked north to the PATH station. I said goodbye to him ont he street with barely a hug. He was uncomfortable exchanging a kiss with me in front of a city of strangers. I wasn’t thrilled by that.

On my ride home, I questioned why I was continuing to see Southern Drawl. He was definitely interested in me, and I was still intrigued by him. I wasn’t ready to write him off just yet, but I didn’t see a lot of promise or potential. I would continue to see other men and continue to see him until I was ready to make a definitive decision.

This entry was posted on May 17, 2012, 10:00 AM and is filed under Gay Dating. You can follow any responses to this entry through RSS 2.0. You can leave a response, or trackback from your own site.