PR and I had a lovely dinner and topped out night off with a scary movie marathon. When we were sufficiently scared and tired, we went to bed.

I purposely turned off my alarm that night because there was nothing pressing to wake up for in the morning. We could sleep in and enjoy each other’s company in my uber comfortable bed.

I liked sleeping with PR. We snuggled and cuddled before finally dozing off. He didn’t wake me throughout the night with tossing and turning like so many others do. We slept well together. Of course, in the morning, we shared more than just cuddling or spooning.  There was still plenty of snuggling, but things escalated to a new level with the discovery of his matching morning libido. We didn’t have “sex,” as in we didn’t have penetration, but we did just about everything else.

Warning: The following may be too graphic for some. While our mouths went wild exploring every inch of each other’s bodies while our hands enjoyed the touch of skin in symphony. I was constantly lingering at his back door as well. I was testing his limits. I wanted to see how comfortable he was with me back there.

He even mentioned his interest in bottoming for me, but it wasn’t going to happen immediately. He needed to warm up to it first; rightfully so, considering it’d been years since someone penetrated him. I was willing to be patient. I was just concerned that it would happen at all. His willingness to play ball in down the road was reassuring.

It was late when we finally motivated ourselves to get out of bed. I think it was our grumbling stomachs that finally inspired us to make moves. I cooked us another breakfast while he sat on the island chatting with me. I was getting used to having him around, and I liked it. He was a very caring and sweet guy — A hopeless romantic much like myself.

We decided to go to the gym, so we finally picked ourselves up off the couch and went to the bedroom to get ready for the day (now that it was about 3:00). Of course we didn’t simply get changed and head to the gym. We got frisky once again as I pulled him onto the bed. He certainly wasn’t complaining. 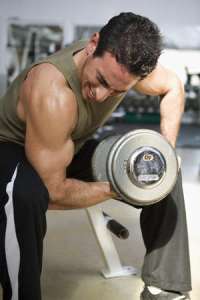 My motivation to have bigger biceps finally overtook my sexual desires, and I suggested we finally get ready for the gym.  He went home to change, and I got dressed. He was starting to take a long time, so I told him I’d just see him there — I was on my way.

I nearly finished my workout before he arrived. It was slightly awkward cause I wanted to kiss him when I saw him, but I didn’t want to make a scene. We had plans to go to a Super Bowl party together, so I told him I was going to head home to shower and get ready. I implored him not to doddle since I didn’t want to arrive at the party after the start of the game. He assured me he’d be ready in time.

Once again, he was running behind, but after hopping in a cab, we arrived at the party just in time for kickoff. A lot of my friends were there, so I introduced him to everyone. This was going to be a test. He would he interact with my friends? Would he be outgoing? Would they like him? I care a lot about what my friends think of the guy I’m dating. I was trying out a new strategy this time around. I was introducing him to them much sooner than guys past.

The whole time, I sat next to him on the couch watching the game, I wanted to hold his hand or have him sit in front of me in my arms, but it wasn’t that kind of party. I would keep my hands to myself. I wanted to jump his bones the whole time we were there. I was showing restraint however.

When the game ended, we walked home with D. The majority of the second half, I kept expressing my desire for cake, so we decided to stop at the A&P and grab something. D got some cake as well, and since he lived nearby, we made a pit stop at his place to relieve our bladders and snag a bite of his cake.

PR came back to my apartment to share the carrot cake I bought for us. While we walked, he asked me the most forward question any guy on a date has ever asked me: “Have you ever had any STDs?” I paused for a moment in shock. I indeed did, and it was an embarrassing story. I wanted to know if he equally shared in my shame before I would volunteer that information. He told me he did, so I explained the time I contracted chlamydia. He then recounted the story of the time he got crabs. It was a bizarre but interesting conversation.

While we ate cake, we discussed zodiac signs. We looked up each of ours and checked the compatibility. I don’t believe in that sort of thing, but it was fun and something to pass the time. We moved things to the couch to relax and discussed everything. I told him about all my exs and he told me about all his. We sat there talking until we realized it was 2:00am. I asked him if he was going to stay the night, and he graciously accepted.

Sleeping with him just felt so right. I was happy to have him there. He was a good guy, and I was really enjoying his company. I liked where this was going, but his future was a little uncertain. He was applying for numerous jobs and attempting to figure out a more permanent living solution. For the meantime, we were meshing so well, and I was enjoying every minute of it.

Things with Smiles had soured, and I was already getting back into the dating game. I found a guy who I thought I’d have a connection with on Grindr and set up a date. When the date didn’t go swimmingly, I made my way home. 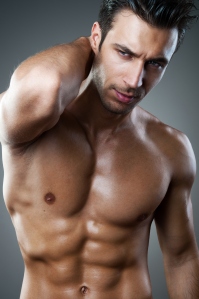 Tonight I wouldn’t be so well behaved. I knew I could find a guy to selfishly pleasure me without much effort on my part, both in the search and in the bedroom. This may sound disgusting to some, but we are all animals when you get down to it. We have sexual desires and drives that need to be satiated. I held no loyalty to one man at the time, so I felt no guilt. The other guy would be quite aware of what he was getting into — A one-night-stand.

I didn’t always have this mindset. In fact, I can specifically remember a conversation I had with N about sex and relationships. At the time, I didn’t believe I could have sex without having an emotional attachment to. He didn’t have the same mentality. I found it ironic since I was further along the gay timeline than he was. I would have thought our positions would have been the opposite.  Obviously, if you read my blog, you know my position has changed. I know I am capable of having sex outside a relationship.

I’m not proud of this, and this is far from and ideal situation for me. However, at times, my animal instincts take over and my libido craves for satisfaction. 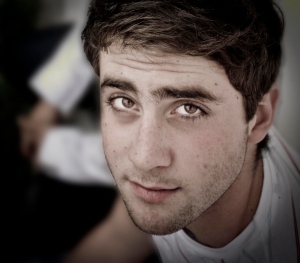 On my walk home, I fired up Grindr. I began chatting with a few people, but there wasn’t much talent. One of the guys seemed decently cute, but I wasn’t sold just yet. I was still on the hunt. We talked a little bit, and I realized we’d spoken a bit on adam4adam.com.

I hit up a bunch of other guys. I was tempted to hit up one of the two friends with benefits I’d established over the summer, but better thinking kicked in. I didn’t want to open up that can of worms again.

When the night was drawing on, I decided to settle for the decent guy on Grindr. He was a really nice, genuine guy. I could tell he’d been judged for his smaller stature based on his adam4adam profile. I felt a connection in our current lack of self-esteem.

We talked a bit more about what the night would entail. It was getting quite late, and he wasn’t thrilled with having to trudge around Hoboken late in the night. I did the unthinkable. I told him to come over and said he could spend the night.

When he arrived, he came directly to my room. I was a little disappointed. He looked better in his pictures, and he was quite small, but I looked on the brighter side. I really enjoyed feeling strong in the bedroom, and it meant I could toss him around a little bit. We casually chatted while I sat on the bed, and he removed his coat and shoes. He joined me on the bed, and we began to make out.

We had protected sex and both of us rather enjoyed ourselves. I showered and then invited him to do the same before going to bed.

When I woke in the morning, it was a bit awkward. I had to go to work, but I also had to get rid of him so I could get ready. I woke with enough time to do both. I politely hinted it was time for him to go so I wouldn’t be late. He quickly got the hint, but he wasn’t going to leave immediately.

I hopped in the shower while he got dressed. After my shower, I escorted him to the door. I was trying to avoid my roommate from seeing him, but I failed. I gave him a gentle kiss at the door and said goodbye. My roommate then said, “I guess the date went really well last night.” I didn’t feel the need to lie, but I didn’t want to get into it. “He wasn’t the one I went on the date with,” I added with a grin. And with that, I simply walked away.

I texted him that afternoon thanking him for coming by and telling him I had a good time. Later, he texted me saying, “Me too :). Do you wanna grab dinner or something sometime? If you aren’t interested or were just looking for a one-time thing, I’d totally respect that. Not trying to sound crazy. Haha. You just seem like a really nice guy, so thought I’d ask.” Apparently, I’d done it again. A guy who knew he was coming over for a hookup wanted more than just sex. I wasn’t interested in him for anything else, so I let him down gently. “Gonna be honest with you. You deserve at least that. Just ended a relationship this week, so I need to figure out me right now… Make sense?” He was quite classy and responded, “Absolutely man. Sorry to hear. Mine ended back in September. Dated over a year. It’s rough. Hit me up sometime :).”

I did need to figure myself out a bit. But, there was no reason I couldn’t do that while simultaneously playing with “Mr. Right Now” and searching for “Mr. Right.”