My Week with PR

Things between PR and I seemed to be something of a fairy tale. We’d met months earlier on Grindr after he had a very rough breakup, and I was just getting my relationship off the ground with Smiles. He temporarily moved a few blocks from me, and after a night out as friends, we’ve been spending a lot of time together as love interests.

After our night out to the movies and dinner, PR spent the night once again. Why should he sleep on a pull-out when he could be sharing a California King with me. I got ready for work, and he made his way home to figure out his day. He was on-call that day, but ended up not having to go into work. Instead, he went shopping with his mother.

When he returned to Hoboken Wednesday night, he came over to hang out. We watched TV in each other’s arms on the couch and he spent the night once again. Things were getting hot and heavy with us, and fast. We still hadn’t had “sex’ in the traditional penetration sense of the word, but we were fully enjoying each other’s company.

Thursday night I have volleyball. This was good because it offered a natural break for us. I couldn’t believe he wasn’t tired of me yet. We’d been spending A LOT of time together, and I’m not always the easiest to be around. I was happy to have the time apart – Not because I didn’t want to see him, but more so because it made me look forward to seeing him again that much more.

When I got home from volleyball, he started texting me. We texted about the shows we were watching until he added, “So, I miss you.” I quickly replied, “Stop being so adorable. You know I can’t resist it!” And then he called it spot on. I love how real and upfront he is about things. “Is today resist each other day? If you need a break, I understand. I find you intoxicating in the best sense — Like happy,” he texted. I told him I did not need a break, and I in fact did miss him. But I also told him I wanted to make sure we didn’t tire of each other. He told me he was having a rough day. He heard back about a job he applied for and was told he didn’t get the position. I felt really bad that was the night we decided to spend apart. I’m sure he just needed a hug. He was depressed. I told him. “I can try to hug it away.” He asked if we could hang out the following night. I told him I had no plans and would love to.

When he stopped responding to my texts, I joked, “Replaced me with pizza?” He apologized since his pizza was delivered, and he added, “Food won’t comfort me as much as you.” And with a smile on my face, I dozed off for the night. 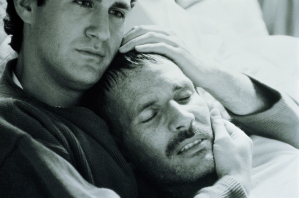 The next night, he came over. I made dinner for us both, and we watched movies. It was nice to have someone to spend my evenings with. This is what I really wanted in a relationship. This is what I was looking for. I was happy!

When we woke the next day, I made us breakfast. He spent the afternoon with me, and we finally motivated ourselves to hit the gym. He went home and changed while I showered. We met at the corner and walked to the gym together. He was very quiet and solemn that morning. We didn’t work out together, but that’s because I like to do my own thing at  the gym. We finished at the same time and walked home together.

That’s when he dropped a small bomb on me. He told me he was moving back home. I didn’t quite know how to take the news. I wasn’t thrilled with it. It meant he would be much further away, and we wouldn’t be spending evenings together so readily. I knew why he did it, and I realized he needed to get his life back on track. But, I selfishly didn’t like the idea.

That evening I had a bunch of friends come over to pregame before hitting up my friend’s birthday gathering at a bar a block away. He met many of my friends and seemed to fit in, but I still had the idea of him moving home in the back of my mind. When the time came, we all made our way to the bar. It was a fun night, but PR was being standoffish. He wasn’t mingling with my friends and was only talking to me a majority of the night. I was a little disappointed. On top of this, he was getting pretty inebriated and flirtatious. I’m comfortable with my sexuality, but I don’t like PDA in a “straight” bar. I feel all eyes on me, and it hinders me from enjoying myself. Nothing he was doing crossed the line, but it also was edging further and further. 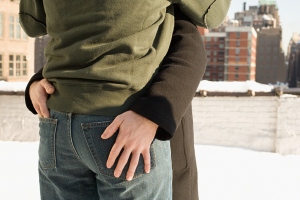 By the time we moved to a friend’s bar (after hours) he was being overt. Granted it was a much more exclusive group and mainly my friends, but he was drunk and making me uncomfortable. I tried to just look past it.

Once again, we went to Cluck U to get a late-night snack. He was so drunk he couldn’t stay awake long enough to eat his. I carried him to my bed and tucked him in. He wasn’t happy because he wanted his chicken, but soon enough he dozed off. I put it in the fridge until the following day. I wasn’t resentful at all of this. I actually enjoyed taking care of him. I knew if our relationship continued, he’d be doing the same for me down the road. I sat in the living room and ate my chicken with the company of my thoughts. I had a lot on my mind since he told me he’d be moving back home. The news he didn’t get the position he applied for was a little unsettling as well. On top of this, there was the incompatibility we shared in the bedroom that hadn’t been resolved. This wasn’t the stability I was searching for, but I was still enjoying his company.

When I had my fill, I tucked myself in bed in quickly dozed off.

The next day, we woke, and he continued to give me $hit for not allowing him to eat his chicken the night before. He ate it for lunch instead.

We got dressed and ready for the day finally. I needed to go grocery shopping, so we walked to Garden of Eden together. His mother was coming in an hour to take him home. It was a bittersweet day. We’d spent more than a week straight together with the exception of one day. Things progressed quickly, but then again, they were about to change drastically.

I said goodbye to him as we made plans for the coming days. We were a few days away from Valentine’s Day, and he really wanted to celebrate it together. I obliged.

I thought about him the rest of the night and what this new arrangement would mean for us. I was quickly coming back down from the clouds…

This entry was posted on March 23, 2012, 10:00 AM and is filed under Gay Dating. You can follow any responses to this entry through RSS 2.0. You can leave a response, or trackback from your own site.