Since that fateful night on December 31st, 2011, I’ve had my eye on a certain someone. He was also attending the party I went to on New Year’s Eve. 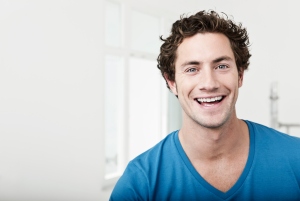 Throughout the night, I talked to him a fair amount. He seemed like a really nice guy. For a solid twenty minutes, he and I were the only ones in the living room until more guests arrived. We got to know each other fairly well. My original thought on him was he was too young, but the more I got to know him, the more I learned how mature he was. Obviously age had nothing to do with maturity. I learned that the hard way with Smiles. I wasn’t going to rule him out just because he was 22. It also helped he was very attractive. He had both the jock look and the intelligent look about him. It was very sexy.

I didn’t want to jump the gun however. I somewhat embarrassed myself that night, and I wasn’t sure if he took notice. I decided to wait until the dust settled, especially since he knew Smiles though a mutual connection, the party’s host. Before my trip to San Francisco, I laid the groundwork. I informed him of my breakup with Smiles on Facebook. He sent his condolences.

Now that I was home, I was ready to dive in and see if I could ask him out on a date. I sent him a Facebook message that Tuesday: “Hey dude. I know this kinda comes out of left field, but I thought you were a pretty down-to-earth guy when I talked to you on NYE. I was wondering if you’d be interested in grabbing a drink sometime…?” I don’t know why, but I felt very vulnerable doing this. It’s crazy. He’s five years younger than me. Why was I so intimidated? All I could do was wait for an answer. 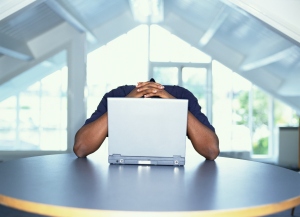 That night, he finally responded: “I am flattered, but I am kinda seeing someone. Happened right after New Years actually. Doesn’t mean we can’t chill as friends.” My hopes were dashed. I’d been plotting and planning this whole thing out over time to find out I missed the boat. I was kicking myself, but there was nothing I could do. It is what it is.

I needed to graciously respond, and secretly hoped I could meet him as friends, and he would realize how much of a catch I am. Maybe he’d let things fizzle out with the other guy. The door wasn’t closed, even though it was beginning to shut. There was still a glimmer of light — A glimmer of hope.

“All the good ones are… haha… but yes.. Chill as friends works for me too. Always lookin’ for friends as well. Shoot me your #, and maybe we can find a time to hang/grab a drink…” I responded.

Sadly, I wouldn’t hear back from him again. Three weeks later, I tried to see if he would be interested in meeting up, but I got no response. If he was truly interested, he would have responded. I was learning to stop pursuing men who didn’t return an interest in me. It never worked out in my favor, and it just caused me greater frustration. If there were interested, they’d be as excited as I was to message/call/text. It wouldn’t matter about waiting two days before calling. If someone is interested, they won’t care about any of that. They’ll just be thrilled you connected at all.

I was beginning to feel very disappointed and lonely. I had no promising prospects on the horizon. As time goes on, this dating thing is getting harder and harder. Everyone thinks gay dating in New York City is a cinch but far from it. It is so incredibly hard to date in this city. The gay men here certainly don’t do anything to make it any easier. 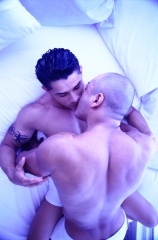 Warning: The following may be too graphic for some. In the meantime, I was back on local Grindr. I found a guy who lived very close to my apartment who wanted to be dominated and wanted to muscle worship me. I hardly think I’m the muscle worship worthy type, but if that was what he wanted, why not give it to him. I went over to his apartment. He was a bit awkward, but I wasn’t there to find love. I was simply there to satisfy a primal need. I thought I would be able to play the part. I thought I could say all the things a dominant top would say, but in the end, I think I sounded ridiculous. It’s not who I am. It wasn’t awful, but I don’t think either of us were getting out of it what we thought we would. It took me a long time to finish with him, as usual, which didn’t exactly make for a smooth evening. When I did, it was worth his wait. However, because of the nature of my climaxes, he had to run to the kitchen and grab a bottle of Resolve and a paper towel to clean up a spot on the carpet when I overshot his chest.

He came back to the bed and we laid next to each other chatting a bit. I learned he knew the other awkward hookup I had in the same building. Apparently they were friends. I specifically asked him not to mention me, which of course spurred a whole new line of questions. I knew this was going to come back to bite me in the a$s. It was only a matter of time before the 40 year-old started messaging me again.

With that, I got dressed and made my way home on my walk of shame. Luckily it was cold out and it helped me clear my head. What was I doing? This isn’t me. This isn’t what I’m looking for. Why am I doing this? Yes, we all have needs, but I should be putting more energy into finding the right guy instead of Mr. Right Now.

I thought about all the other guys floating around out there on my roster. Was it even worth it to revisit with long-time online friend after our failed date? Maybe the southern boy I was chatting with would finally find the time to meet up. The guy who came back on the roster after almost a year was still a possibility. I needed to plan drinks with him. My Asian neighbor friend from Grindr was still asking me to grab dinner sometime, but he doesn’t drink, so I didn’t see us being very compatible. There was the very sexy, very compatible guy I found on Adam, but he wasn’t responding to any of my messages anymore. I needed to cut him from the list.

I needed to get back in shape and concentrate on building a better me. Ironically enough, I was hitting the gym regularly again. For so unknown reason, I was looking for N there every time I went. I don’t know why, but something inside me wanted to see him there, even though I wanted nothing to do with him. I needed not only to close that chapter, but also to toss the book to someone else and forget about it. 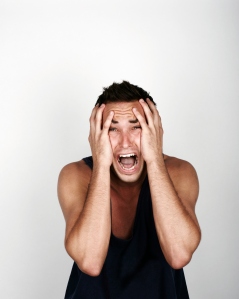 I was spinning my wheels. I was constantly Grindring, and it was getting me nowhere. I was still feeling a little angry for letting Smiles take advantage of me. I thought back to all my relationships and realized how each of them let me down. N, San Francisco, Smiles… I didn’t need any of them anymore. They brought nothing positive to my life. It was time to drop that baggage. The only one I wanted to keep around was Broadway. Since we’ve broken up, we’ve managed to remain friends. I turn to him for advice, and he is always there for me. He’s a good friend and I truly appreciate him. I can’t understand why they all couldn’t be that way. I’m thrilled we’re still friends and want that with all my exs, but if they weren’t going to make that possible, so be it.

I needed to get to a better place. I wasn’t in a dark place, but I was certainly stuck in this constant gray area. I was walking around in a cloud. I was wasting my life away searching for a guy in all the wrong places. If I wasn’t happy, I wasn’t going to find anyone. I just needed to figure out how to change things. It wasn’t going to be easy…

This entry was posted on March 7, 2012, 7:00 AM and is filed under Gay Dating. You can follow any responses to this entry through RSS 2.0. You can leave a response, or trackback from your own site.