My Very Own Cheerleader

Tuesday came and went quite uneventful in my relationship world. Smiles called and we talked for five minutes about our days.

When Wednesday arrived, I was starting to seriously worry Smiles wasn’t going to be attending my holiday party. I’d already asked a few times, and I didn’t want to be pushy, but the time had come to get a straight answer.

I texted him in the middle of the afternoon: “You still haven’t confirmed your attendance Saturday… You are coming right?” I quickly received a very succinct response: “Yes.”

What a relief. I was worried he’d made other plans and didn’t know how to tell me. I’m not sure how I would have taken it had he said no. You may have been reading about a new slew of guys I was pursuing from a myriad of online dating venues. I wanted him by my side for the party, and I wanted him to meet my friends. Many had not met him yet, and if you read my blog, you know how important to me they are. 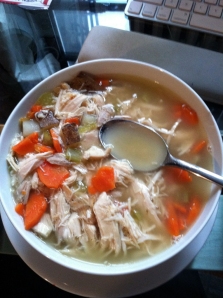 Apparently, I’d opened up the dialogue for the day. Smiles followed his last text with a picture message. “The final bowl.” I was laughing. “Haha. You made it! You didn’t have to eat it all if you were tired of it… Don’t forget about the sausages!” I know I made a lot, but he didn’t need to feel obligated to eat it all. “All good. It’s what I’m supposed to be on. I just laugh because it’s like a salad at the Cheesecake Factory — Much larger than it looks!”

I took the Thursday before my holiday party off. I need to do a lot to prepare and to finally settle into my new apartment. 40 people were expecting a party that lives up to my usual standards. I couldn’t disappoint.

I started in my room with probably the lowest priority, but the most fun project. I was detailing a tree on my bedroom wall. I was shocked it only took me two hours to make the tree decal out of black contact paper. “2 hours later, the tree is up…” I texted to Smiles. He immediately responded with support: “Cool. I forgot about that project!” He told me he’d slept-in quite late, but he was getting a lot of work done.  And, since he’d finished season two of Vampire Diaries, he had nothing to distract him. “Nice. I’m cooking up a storm. Still no cable guy,” I replied. He didn’t realize I took Thursday off from work as well as Friday.

His next response could have knocked me over with a feather. “Wow. Lot of prep for Saturday! Want me to come over tonight and help?” This was the first time Smiles took such an interest in my life. It kind of came out of left field, but there were no complaints here! I made my feelings quite clear in my response: “I would love if you came over tonight! I need a consultant :)” I needed some design advice. I still had to hang pictures and light fixtures and the like. I could handle most of the cooking myself, but his design skills and good taste were going to get put to good use. “Still can’t lift anything, but happy to help with other stuff,” he added.

I asked him if 10:00 would work. I had volleyball, so that was the time I would be home. I didn’t want to give up a night with him just because of my game. The following made me about as giddy as a schoolgirl! “Oh yeah. It’s Thursday 😦 Was thinking I was coming over at 6:00ish. Yeah. I can do that. 10:00. But, maybe I could come watch volleyball?”

WHAT!? He wanted to come watch me play volleyball?! I’d mentioned it to both N and Broadway when I was dating them, but they never showed much interest in it. For him to volunteer without me ever even mentioning coming was amazing! “Yea! Sure! Come at 6,” I exclaimed.

We ironed out the logistics, and he made his way to Hoboken around 7:00. Every week I get a ride from my teammate I’ve known since high school. He also happens to be gay, so he was excited to finally meet Smiles. This would also be the first time my sister met Smiles as she gets a ride as well.

The two of us hopped in the backseat, and I introduced Smiles to my high school friend. When we picked up my sister, I introduced him again.

When we arrived at the gym, Smiles made himself comfortable and pulled out his iPhone. I knew this wasn’t going to be the most thrilling night of Smiles’ life, but it meant the world to me he wanted to come watch. I would look past the fact that he spent a lot of the time playing with his phone. I knew he was actually watching because between every game, I went over to sit with him, and he made comments on some of the plays I was involved in. The ironic part is, many of my teammates didn’t know I was gay. That night, I didn’t give them a definitive answer, but I’m sure they could have deduced the situation.

After the game, we went home, and Smiles helped me with a few things I needed to ask him about before I showered and we had a late dinner. While we ate our dinner on the couch, we watched TV until we grew tired. We made our way to my bedroom and dozed off for the night.

The next morning, we woke without an alarm and had breakfast. I thought Smiles would stay for a bit of the afternoon. My friend, P, was coming over to help me make food for the party. I informed her she’d be meeting Smiles, and she was thrilled and very excited. Instead, Smiles had to make his way home because he had work to do. Around noon, I said goodbye with a kiss and went back to preparing for the party. P arrived disappointed to find Smiles had gone, but we didn’t let that get us down. We spent the afternoon cooking up a storm. She was invaluable. I don’t think I could have done it without her.

I was in good spirits. I had an answer about Smiles’ attendance. He came to support me in one of my recreations. He helped me make decisions on decorating. All was good in my world. Now I just needed to find the time to finish cleaning and cooking for 40…

This entry was posted on January 10, 2012, 10:00 AM and is filed under Gay Dating. You can follow any responses to this entry through RSS 2.0. You can leave a response, or trackback from your own site.