I woke up after a night of passion and disappointment with Smiles quite confused. I was trying to decide if my dream was reality or my imagination while feeling the disappointment of the truth of the situation.

I was suddenly aware once again how he shot me down when I wanted to discuss things with him the night before. He may have won that battle, but I wasn’t admitting defeat. It wouldn’t be long before we had that discussion. I was just waiting until the next comfortable moment to pop the question.

We woke up at a reasonable hour. Being the night after the office party, I wasn’t expected on time or to be particularly productive that morning. I had nothing planned for the day, so I took my time making my way to work.

I showered and prepped for work while Smiles checked his emails and got dressed. We decided to go downstairs from his apartment to a small diner for breakfast. Smiles grabbed the paper as we walked out the door, and we made out way downstairs.

We sat in a booth and had an interesting interaction with the hostess. It was obvious Smiles was a regular. He came there for breakfast about three times a week. She knew he didn’t need a menu, but handed me one so I could decide what I wanted for breakfast.

When the waitress approached, I witnessed yet another interesting interaction. The two of them went at each other with witty comments like an old married couple. We got our coffee and Smiles opened the paper. I know he had his morning routine, but was he really going to read the paper with me sitting there. Heaven forbid we actually talk to each other.

He perused one article about a woman who died in an elevator at a NYC ad agency. I was quite knowledgeable about the incident, so we discussed it a bit, and surprisingly he put the paper away. I think he realized how rude it was.

We got our food and the chatter was minimal. After we paid our check, I walked back upstairs to use his restrooms before heading uptown to work. I also brushed my teeth since I finally remember to bring a toothbrush. So many times I spent the night, and had no option for brushing my teeth other than a toothpaste covered finger. After I finished, I informed Smiles I would be leaving the toothbrush in his medicine cabinet. At this point, I didn’t ask. I was telling. He didn’t have a choice here. I know the toothbrush can become a symbol in a relationship for taking things to a new level, but I didn’t care. If he wanted to read into it, so be it. Didn’t matter to me — The toothbrush was staying. 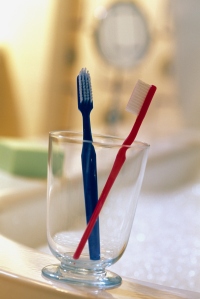 He walked me to the door, and we have a very unceremonious goodbye. It was very awkward, and I wasn’t sure what the deal was.

As I walked to the PATH to head to work, I started to think about Smiles and I. Things had to change. I’d had enough of the run-around. I needed to know what we were. I didn’t need a label. I just needed to know how he felt about me. I was done putting so much of myself into something I was so unsure about. I couldn’t read him. We were going to have that discussion, and we were going to have it soon. I needed answers, because I wasn’t going to drive myself crazy trying to figure him out anymore.

Later that day, I invited him to come with me to a birthday party the following night, Friday. He informed me he was already triple booked for the night and wouldn’t be able to come along.

This was yet one more confirmation for me he wasn’t that into me. I had a party to go to, and I didn’t think twice about asking him to come with me. He already RSVPed for three parties and didn’t invite me to a single one. I also learned he had two parties on Saturday and one on Sunday. Yet more things in which he didn’t think to include me.