Valentine’s Day had arrived. I managed to find myself single once again. I have yet to celebrate a Valentine’s Day. The one year it came while I was dating Broadway, we couldn’t be together because I got shipped off for work to the Midwest.

I ended my intense weeklong relationship with PR just the night before. I knew it was bad form to stick to our plans to go out for a romantic evening if I was just going to be faking it.

I was all over Grindr and even pulled up the OKCupid app to see who was around my area. When this produced little results, I began to filter through all my previous Grindr, Adam4dam.com, OKCupid, and Manhunt contacts to see if there maybe something I missed or someone I wanted to revisit.

I messaged a few guys and asked what they were up to. The ones who I hadn’t spoken to in quite a while I asked how they’d been since we last spoke.

I wasn’t happy with who I was becoming. Once again, I was letting myself get out of control. I needed to reign in my sex life, but that day, I just wanted to get it in. Tomorrow is another day. 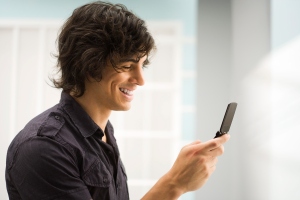 I started chatting with the guy I’d gone on an awkward date with. We’d already talked about trying to figure something out about getting together again. I could tell he was more interested in sex than a relationship, but there was also still a glimmer of hope there for something to bud. I don’t claim to be a pro in the bedroom, but I do think, based on previous feedback, I am pretty damn good between the sheets. Maybe I could win him over that way.

We went back and forth for some time about him coming over. He wanted to go to the gym and hadn’t left work yet. Apparently I didn’t give him enough notice, but I could tell he was very interested. We talked about the logistics, and I made some great progress imploring him to come over. He told me he’d try to get his errands done and then he’d be in touch.

Finally, I got a text message. It appeared we were going to have our “second date” after all. He was wrapping up a few things and then he’d be over. He informed me he was bringing his c*ckring and poppers. I told him that was fine, but I wouldn’t be partaking in the poppers.

I immediately hopped in the shower to clean up, shave and prep for his arrival. I also opened a bottle of wine so we could relax before just jumping in the sack. I wanted to seduce him a little.

When he arrived, he was slightly awkward. I poured him a glass of wine and we sat on the couch chatting and drinking. When I felt the moment was right, I made a move. I was all but on his lap kissing him. And that’s when I learned why he was still single.

He was the worst kisser I’d ever been with. I thought he was going to eat my face. All that time I spent staring longingly at his lips, and that’s how he chose to use them. It was a very sad Valentine’s Day. I tried to soldier on past it. I tried to lead him and make-do the best I could.

Finally, I stood up to take a break, took him by the hand and led him to my bedroom. We slowly undressed each other. I was enjoying peeling his clothes off one by one. As I did, I was groping his entire body. He had a very sexy body and great skin. I couldn’t stop feeling him up.

Warning: The following may be too graphic for some. We laid head to toe and began orally pleasing each other. Eventually, he stopped to put on his c*ckring and grab his poppers from his jeans pocket.

When he came back to the bed, I began orally pleasing his bottom. He had a great a$s and manscaped very well. I was enjoying myself, but it didn’t seem I was doing the best job for him. That’s when I learned he doesn’t really get anything out of it, he told me apologetically. I didn’t understand because long ago he told me he was a bottom. I also recalled how much stimulation he got from his nipples, so I concentrated on them. He went wild.

A short time later, we laid next to each other stimulating ourselves. It didn’t take long before I finished all over his chest per his request. For once it didn’t take me forever to climax. As soon as I finished, he too exploded on his chest.

After giving him a towel and we both cleaned up, we laid next to each other in bed. I wanted to cuddle, but he didn’t seem the type to I just put my hand on his inner thigh. We chatted about the most random things. He was staring at my bookcase, and we talked about some of the books on the shelf. I pointed out my only gay book on the shelf, Beaches. It’s a picture book I like to page through periodically. He told me all the gay books on his bookshelf deal with barebacking. A huge red flag went off in my brain! Was he into barebacking? I didn’t ask him to elaborate, but I wish I did.

That’s when I hopped on his back and began to give him a massage. I have very large and very strong hands. I like to put them to good use. Apparently he was a little more delicate that I anticipated. He asked me to lighten up a bit, but he was enjoying what I was doing. I noticed how he analyzed everything. He really was a headshrinker.

When I stopped, he started inspecting my skin. I recalled on our date how he wished he was a dermatologist. He was very complimentary of my skin and complexion. I appreciated the compliment, but the delivery was incredibly awkward. He was not an easygoing guy, and I started to realize how little I was attracted to him. On top of that, I was starting to get an irritation on my neck from where he was trying to eat it. I knew then this would not be a repeat offender.

Ironically enough, he messaged me on Grindr the other night, but of course this went nowhere.

Now, the only question is when and if I unfriend him on Facebook and what are the consequences?