I continued my walk of shame north on Seventh Avenue. I was still dressed for a night out from New Year’s Eve the night before. I didn’t care if anyone judged me. I was in my own world. No one else existed that morning. I was utterly alone in a city of millions.

I continued to try to reach Boston through text and by phone, but no dice. Since I was going to be near his apartment, I thought I would reach out to Broadway. At the very least, I could kill time with a visit until Boston finally decided to get back to me. I called him, and he picked up after a few rings. I asked him what he was up to and told him I wanted to swing by for a visit. He was still in bed and said he needed a few minutes, but he told me to come by. I told him I was walking from the 20s, so there was no rush for him to get out of bed.

When I arrived, I walked right up to his apartment. It was like old times — A blast from the past. It’d been months since I’d been there, but it felt like yesterday. I knocked on the door, and he greeted me. I came in and sat while he finished getting ready for the day. We sat on the couch, and he asked how my New Years was. “Tell me stories. You always have good stories to tell me,” he added. I told him what I did the night before. I gave him the cliff notes because I didn’t want to belabor the point. The wound was still fresh and bleeding. He shrugged it off and suggested we go to the diner for breakfast. I kinda loved that about him. He knew how I felt about it, so he did his best to brush it under the rug.

I agreed to go to breakfast, but I told him I’d already eaten. I would keep him company, and we could catch up. It’d been since the summer since I’d seen him.

Breakfast was nice. He told me about the party he went to the night before and all the guys he was pursuing. As usual, he was very passive about it. “I dunno if I really want to see him again…” he’d say. He’d find something completely superficial to judge the guy about so he wouldn’t have to put in the effort.

Since Smiles’ birthday gathering, we gained a mutual friend. We learned this from Facebook. The guy who I palled around for the night had been at the party Broadway went to the night before. They interacted, but it wasn’t a positive interaction. Broadway was remotely interested in this guy, but apparently he gave him the cold shoulder. This really turned him off, but I assured him my birthday buddy was a really great guy. If I’d been single that night, I probably would have asked him for his number. Broadway wasn’t sold.

Ironically enough, Smiles and I were almost at this party. It wasn’t until Smiles learned of the over-priced charge to enter that he decided we were just going to the house party. It was crazy to realize Broadway, Smiles and I were all swimming in the same circles in New York City. Apparently the gay community was pretty tight, even in a big city. It put it all into perspective. It also made me realize the picture of myself I painted when I let a stranger suck on my neck and face in front of the guy I was dating.

I wasn’t feeling very talkative, so I did a lot of question asking and listening. When Broadway finished his breakfast, he asked for the check. He wasn’t feeling well, so he wanted to go back to bed. I checked my phone, and Boston still hadn’t gotten back to me. I guess I wouldn’t see him before he left the city. 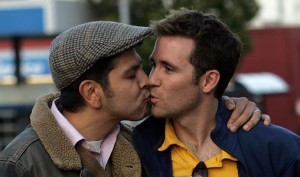 I walked Broadway back to his apartment and said goodbye. Something I learned from him was it is okay to kiss an ex on the lips when you see them. When I first came out, I was fascinated by how often gay men kissed each other. This was completely foreign to me and not something I was comfortable with. Even if I travel in a big gay pack, I don’t think I would be kissing my gay male friends. But, I felt comfortable kissing a man who I had kissed over a hundred times. So we exchanged a kiss and a hearty hug before I made my way to Port Authority to snag a bus back to Hoboken.

While I walked to the bus, I texted Smiles: “Since I have the day off tomorrow, can we do something fun?” I was hoping I could do some damage control and get us back on a happy track.

It wasn’t long before I received a simple text in response: “I have to work tomorrow.” I was already picturing a Monday afternoon with me sinking deep into the couch by myself in front of the TV. I was very disappointed, but it’s not like I had anything to say. I was the one who royally messed up here. I was going to have to deal with the consequences.

Later that evening, I talked to Boston on Facebook. I told him what I did and how things played out. We didn’t talk long, but promised to come back to the topic when he had more time.

I had time all day to assess the situation. Why wasn’t Smiles mad? I realized I wasn’t happy about this. It hurt even more. It showed me quite clearly how little I meant to him. I didn’t see any way to recover from this. I was pretty sure our relationship was over. And, since I’m pretty much a high schooler in the gay dating world, I hopped back on adam4adam.com and Grindr that night to see what was out there. I wasn’t throwing my line into the sea, but I could at least swim around and see what kind of fish were out there…

This entry was posted on February 9, 2012, 10:00 AM and is filed under Gay Dating. You can follow any responses to this entry through RSS 2.0. You can leave a response, or trackback from your own site.