Christmas day had passed. My time home was coming to an end. I was happy to be home, but I was also anxious to get back to normal life. 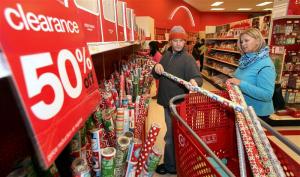 The morning after Christmas, my father and I decided to do a little shopping to see if we could land any special deals to kill time. I would also finally be in cell phone service, so I could text Smiles and wish him a safe flight. When I got into service, I got an influx of text and picture messages. He’d sent me quite a few, keeping me updated on what he was up to. I really was missing him and quite anxious to get back to see him. I proposed we do dinner at my apartment since he had to postpone it before the holidays. He texted back in agreement. I was finally going to get to make us the standing rib roast. I told him I missed him, and he responded, “I miss you too! 🙂 “ I could have melted into a puddle right there. This was so unlike him to express his emotions like this, but I was eating it up! 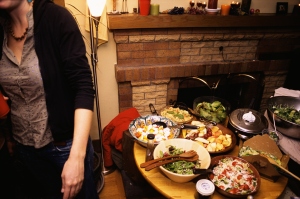 The day after Christmas is always spent with my father’s side of the family. We all gather together for a nice potluck meal that rotates from house to house year to year.  This side of the family has also shrunk significantly. My grandparents have been gone since I was quite young. My father’s brother is in rough shape these days from his battles with diabetes. His sister died a few years ago and her husband is in a nursing home. I rarely see their daughter, my cousin since she moved away and got married. That left one sister whose husband also passed away a few years ago. But as that generation was shrinking, another was growing in leaps in bounds. The living sister has 5 children, all of which are married and have become baby making machines. They now outnumber the four of us five to one.

The gathering is always a lively one with many children running about. Christmas is one of the two times I spend with this side of the family each year (the other being an annual family reunion). We also have an annual tradition of a “Yankee gift swap” or “white elephant sale” depending where you come from. The tradition has lost a lot of its allure as my cousins have adopted a new tradition of buying crap at Wal-Mart and Big Lots the day after Christmas for half price.

My sister and I had to work the Tuesday after Christmas, so around 5:00 we hopped in the car and made our way back to Hoboken. When I got back to my apartment and unloaded all my presents from home, I picked up the phone and called Smiles. Sadly, it went straight to voicemail. I was hoping to relax after a long car ride with some time talking to him, but alas, that wouldn’t be the case.

My roommate arrived home, and we swapped all our holiday stories. We plopped down on the couch and started to catch up on the programs we saved on the DVR. After some time, Smiles called. I think if you were in New Jersey when the phone rang, you may have seen a beacon of light in the sky that was my smile.

He told me about his trip home and the ordeal he went through. When he got back to the city, he’d gone out with one of his female friends for dinner. He devised a new plan to work out of her apartment going forward so he would be more productive than he was working out of his apartment. He felt if he had a place to go to every day that wasn’t in line of sight of his bed, he would get more done. I told him I thought it was a great idea. Even though they wouldn’t be coworkers, they could keep each other on task. Either that, or it would be a complete disaster, and they would be a constant distraction for each other.

I told him about my time home, my family and how the gift swap has become a sham. He laughed and told me about the rest of his time home with the family.

It wasn’t a long phone conversation, as our phone calls never are, but it certainly satisfied my hunger for Smiles. It would satiate me until I got to see him the following night when he came over for dinner.