The Start of a Spectacular Weekend

The Friday following my business trip to Memphis, my special neighbor, who we’ll call N from here on out, came over. I was pretty beat from my trip, and he had a hard day at work. We decided against going out for the night and settled on Mediterranean on the couch. We ordered food and snuggled up for a movie. For me, there’s nothing better than having someone to come home to after a stressful business trip. I also finally figured out my roommate situation (or so I thought), so that stress was lifting. One of my good friends from Long Island was taking one room, while North Carolina was laying claim to the other.

We noticed It’s Complicated was on TV. I told him it was a very good movie, and he hadn’t seen it, so we watched it. I was happy we picked a more romantic movie for our night in on the couch. I just wanted to snuggle up to my big man and feel at home. We both enjoyed the movie immensely.

When the movie was over, we went into the bedroom to have sex. It was a very good night, and we finally dozed off late in the night.

The next morning, we were going to the beach with my sister. When she came to pick us up, N was running late. She started to get p*ssed, and made the comment to me, “Do you even know this guy? I don’t exactly like bringing strangers with me to the beach in my car.”

I flipped out on her and asked her why should would make such a malicious comment. “I don’t like the implications you’re making right now, and I suggest you back off!”

N finally arrived, and I introduced him to my sister. We had a nice ride out to Long Beach, Long Island with nice conversation. When we arrived at the beach, N got a little more affectionate with me. He was feeling comfortable in public, probably since he didn’t know anyone. We put suntan lotion on each other’s backs, and as we laid on the blanket next to each other, he periodically put his arm around me. When I was in his stage of being comfortable with myself, I was not that ready for PDA. I was impressed with how fast he was evolving and finding his comfort zone.

The time came to head back home to avoid serious traffic. We packed up and made our way back to the city, all the while my hand was in reached into the back seat stroking his leg, and then finally making it’s way to his crotch. He rather enjoyed it, and I think the possibility of my sister noticing made it all the more exciting for him.

When we got back, we both went to our separate apartments to shower. We were going out for dinner that night. He was excited we were going on a “real” date. There is a restaurant I have been dying to hit up for a date since before I was dating Broadway. I was never able to take him there, so N and I went to Dino and Harry’s. We both enjoyed our meals a great deal. We shared desert after seeing others immensely enjoying theirs, as did we. We also watched as a couple was on a date. The man abandoned the woman to go over to the piano to join in the karaoke. We both talked about how much of an as$hole he was, and I became more attracted to N’s personality. It was a very special date for me.

A few of my friends he had yet to meet were at City Bistro that night. Since it was only 2 blocks away, I suggested we go there for a few after dinner drinks. He met them all, and they all loved him. He was giving some of the girls dating advice and really stood on his own two feet with them. This is very big for me. My friends are very important to me, so I thoroughly enjoy when the man I’m dating fits in the mix. 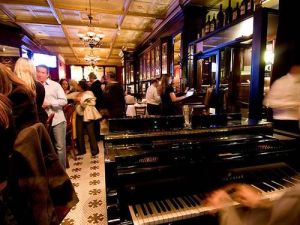 Finally we dozed off. I laid there with a smile on my face. I had only known this man for a short period of time, but we were fully immersing in each other’s lives, and I was starting to have very strong feelings towards him.

This created a whole new dilemma. My blog is about dating. If this guy became my boyfriend, would I tell him about the blog? Will he read it and want nothing to do with me? Will he insist I don’t write about him? Or will he be totally cool with it and excited about? This was something I was going to have to figure out soon. I’m very honest in my relationships, sometimes to a fault. This was certainly something I was going to have to come clean about. Only time would tell the ramifications of the timing of that discussion.

This entry was posted on June 30, 2011, 10:00 AM and is filed under Gay Dating. You can follow any responses to this entry through RSS 2.0. You can leave a response, or trackback from your own site.