When It Rains, It Pours

Hope you are enjoying these. It will help bring the blog a little closer to real-time. If you’re keeping up with the stories chronologically, please skip down to this morning’s post first, then read this one. I think it’s a good one! Enjoy!

Life was good. I finally met a man who seemed to be too good to be true. We’d already been on three unforgettable dates, and things were only getting better.

Saturday morning, I said goodbye to Clark Kent when I dropped him off in the city. I wanted to spend every waking minute with him, but things were still fresh and young for us. It’d only been a week. I needed to stop my habit of diving in head first, or I could be in for a world of hurt. Saturday night, I made plans with friends to go out. One of the guys I swam with in college asked me to come by to pregame and then go to the bar with him and some other friends. It’d been months since a request like that came in, so I was ready and raring to go. By the time I got ready to go out after running all my errands, they moved things to the bar. I met the group at Black Bear in Hoboken. These friends are serious triathletes, so they never go out, and when they do, they go to bed early. I also encouraged my other friend P to join us.

When I got to the bar, I sent CK a text to see what he was up to. He responded by telling me to come into the city and spend the night with him. Had he texted me a half hour earlier, I probably would have never entered the bar and would have gone straight into the city. I stepped outside to call him and explain. I really wanted to go see him since I couldn’t get enough of him, but P had just arrived. I didn’t want to ditch her. He fully understood. A small part of me wanted to ensure he wouldn’t get tired of me, so I thought some time apart would do us good. 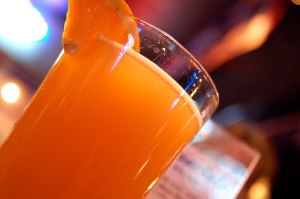 I went back to the bar and had a good time with my friends. In true fashion, a half hour later, all but P made their way home to go to bed. It wasn’t even midnight yet. I told her all about CK and how amazing he was. I also told her about how I’d ended things with all the other guys. She kept asking things like, “Well, what about [X]? I thought you had a good date?” I explained to her that none of these guys were like my Superman. They didn’t measure up at all. She was impressed with my conviction and wished me luck, but she warned me not to get too far ahead of myself. P and I decided to go to another bar we enjoyed far more, Cooper’s Union, where we sit and chat while our favorite Hoboken bartender serves us.

Just as we were about to leave the bar, it started pouring. We agreed to call it a night instead. She hopped in a cab, and I made my way down the street home. I didn’t get far before I decided to run. I ripped off my soaking wet shirt and ran on my Cole Haans the dozen blocks home. When I got home, I texted CK to tell him about my “TV commercial-like sprint in the rain home.” (The Nike technology in Cole Haans really is amazing btw!). He responded back telling me how much he wished he’d seen me. He told me he was turned on by the mental picture. I achieved my goal. I knew exactly what I was doing when I sent that text to him. I wanted him to want me.

Sunday, I talked to CK, and we made plans for me to spend the night in the city. It made sense since he was so close to my office. I could bring clothes for work the next day and head straight there in the morning.

As the day progressed, the weather deteriorated. It was pouring. I made my way to his place around dinnertime soaked to the bone. I had my giant umbrella with me, but water-soaked my pants from the ground up. He stripped me of most of my clothes when I arrived, and we began fooling around immediately. This, of course, led to sex and some hot, sweaty fun.

I was happy to be spending a rainy night in with him. We had no plans and no obligations. We were simply going to cuddle in his apartment and watch something on his iPad. He offered to make me dinner, and I accepted. He told me his cooking abilities were limited, but he would whip up his specialty for me. I heard a lot going on in the kitchen while I sat in his living room. He wouldn’t let me help. He wanted to surprise me. When I came into the kitchen to give him a hug and kiss, I got my kiss but was ordered back to the couch.

Moments later, he brought me a plate full of salad with chunks of chicken and a tasty dressing. It was very good, and I enjoyed it thoroughly. That night, I would also learn of CK’s sweet tooth. We weren’t even done our salads before he was talking about dessert. He didn’t have anything in the apartment, but there was a bodega on the block. We would venture out into the rain to satisfy a craving for sweets. He offered for me to stay in the apartment and stay dry, but I insisted on coming with him.

We picked up Oreos, ice cream and some cheddar bread sticks and made our way back out into the rain. I was tempted the whole walk back to ask him to hold the umbrella while I ripped my shirt off and ran back to his apartment in the rain. The only thing that stopped me was that I’d have to stand in front of his doorman with no shirt on until he caught up, and I thought it might embarrass him. I chickened out! I was so disappointed in myself. I wanted to show him I didn’t take myself too seriously.

When we got back to his apartment, we dove into the ice cream and Oreos. He made each of us a bowl, and we cracked open the bread sticks. We sat in bed, and when we finished, we cuddled in front of his iPad watching Smash. Shortly thereafter, I dozed off in his arms. It was a perfect rainy night, and I truly looked forward to many others with him while I dreamed the night away. 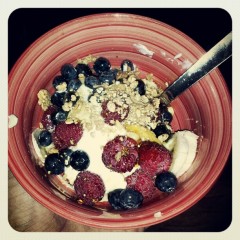 The next morning, we fooled around before getting ready. While I showered, he made me a bowl of yogurt, fresh berries, honey and granola. It was delicious. He was really taking care of me.

Every moment made me fall for him more and more. We walked to my office together before he hopped on the subway, and I made my way inside. I was head over heels, and things were just starting. The possibilities were endless, and I planned to explore them all…

This entry was posted on June 1, 2012, 3:00 PM and is filed under Gay Dating. You can follow any responses to this entry through RSS 2.0. You can leave a response, or trackback from your own site.