From Metropolis to Hoboken

On April 20th, my blog turned one year old. I didn’t even realize the milestone was coming up until I looked back at the calendar on a whim one day. I felt the need to celebrate, but I hadn’t told Clark Kent about my blog yet. How could I tell him I wanted to celebrate something I didn’t feel comfortable sharing with him yet?

Instead, I celebrated privately with messages from friends and readers on the blog and over social media. I also had a date night planned with CK.

I invited him to come out to Hoboken for an evening ride on the bike since we weren’t able to do so the previous Sunday. This would be the first time he came out to Hoboken and would see my place. I was quite excited. I came home for work early after a pitch and made sure my place was acceptable.

He had to work slightly later and had to swing by home before he came over. It was a Friday night, and he would be spending it in my bed. As time passed, I sat on the couch patiently awaiting his arrival as the clock ticked on. I had no word from him. I tried calling, but no answer. Where was he? What was he doing? What was taking so long?

Since I was a little broken from previous relationships, my mind began to get creative with where he may have been or what/who he may have been doing. Finally, I convinced myself to put those thoughts out of my head. They weren’t born of any behavior he exhibited. They were simply a spawn of his presence on Grindr. I needed to learn to trust again. The thoughts were gone, and all I could think about was seeing him.

He finally arrived in Hoboken around 8:00. I wanted to watch the sunset with him. The way it reflects off the city skyline is breathtaking, however, the sun had completely set. We’d be taking a ride in the dark.

I picked him up on the bike at the PATH, and we set off along the waterfront to the palisades of Weehawken. I wanted to show him a spectacular view while taking the bike out for a spin. He’d been so excited about it ever since he first learned of its existence.

I really relished having him ride behind me. He pulled himself in tight against me. It was incredibly romantic, and I loved how he wrapped his arms around me. I felt like a great protector.

When we got to the palisades, we parked the bike and took a short stroll along the cliff. We talked while hugging and kissing each other with the spectacular NYC skyline in our periphery. We happened upon a family taking pictures of each other with the city in the background. He offered to take the picture so everyone could get in the shot. I thought it was incredibly sweet of him, and I fell for him a little more at that moment. Every moment with him made me want him all the more. Again, I wouldn’t let myself get too wrapped up in him. It was still early. I didn’t even know if he was interested in a relationship, let alone one with me.

After taking the picture, I told him about my desire to prank tourists in NYC. I would offer to take a picture of them. Just as I was about to snap the picture, I would turn as if to run. When they began to chase after me, I would turn around and snap a picture. It would give them a great experience and a fun story to tell for the rest of their lives, and they’d have a picture to accompany it. He thought this was brilliant and commented on his desire to do this himself. 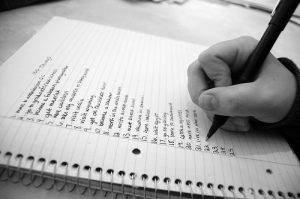 That’s also when I told him about my life’s to-do list. I told him I wanted to share it with him later because it spoke volumes about me.

I found a spot to park, and we walked to the restaurant holding hands. I wasn’t yet comfortable doing this in Hoboken, but it was something I needed to get over. I would be gay for the rest of my life. If I wasn’t okay showing affection in public, I was in for a lot of headaches going forward. Since we didn’t have a reservation, they asked if we minded sitting outside. I preferred it actually. However, this posed a new situation for me again. We would be street side, and if I wanted to show affection, all of Hoboken could see — Or at least that’s how it felt.

Slowly but surely, I got over this. I was rubbing his knee under the table and exchanging kisses over our meal. I didn’t care who was looking. I still felt a little self-conscious, but I was proud of myself for getting over this.

After discussing wine at length, we agreed upon a nice bottle of Malbec. It took us some time to figure out how to order from the tapas like menu. We still hadn’t figured out our sharing dinner groove, but it was fun to learn this together. I came to find we shared a lot of the same tastes and likes. It also helped we were both share quite an adventurous palette. We ordered a few plates and told the waiter we would continue to order until we had our fill.

The food was great, and the conversation was even better. I was still getting to know him, and I was mesmerized by his smile the entire meal. I was gaga for this guy. If it turned out he wasn’t interested in pursuing a relationship with me, I was going to be heartbroken. I was past the point of protecting myself. I’d already cracked the candy shell. Now, I was in his hands.

We declined dessert, and I made sure to give the waiter my credit card to pay the bill before CK even had a chance to think about it. This date was going to be my treat. I liked this new system. With all the other guys I dated, we both threw down our credit cards and split everything. This felt more like dating and more like a relationship. Each date felt special because one of us was treating the other to it.

We hopped back on the bike and rode back to my apartment. When we got there, it was already fairly late, so we headed straight to my bedroom. I was just finishing removing my shoes when he shoved me backward onto my bed. Since it was up on risers, the bed shifted to the side and collapsed. He was so scared he’d broken my bed, but I assured him it was already an issue. This had already happened with N once before. I’d already been searching for a new sturdy bed not on risers, and this would be the impetus that forced me to address the issue with much more vigor.

Warning: The following may be too graphic for some. Regardless, we found ourselves naked, and I was grinding on his backside. Our passion was elevated to a new level, and we were all over each other. I couldn’t get enough of his body — It was purely amazing. I’d never been with someone so handsome, so sexy, so fit, so sexual. He was like nothing I’d ever experienced before.

Eventually, he reached behind himself, grabbed hold of my manhood and directed it in until I found myself deep inside him. Amazing sex ensued until we both had our fill.

With that, we cleaned up and climbed back into bed. I was happy to finally be sharing my bed with him. This would be the first time in a long time my California king was being put to good use. We fell asleep in each other’s arms. He was my little spoon. Throughout the night, we changed positions many times, but never fully woke up. We slept great.

When we woke in the morning, CK had to head back into the city to begin apartment hunting. He’d been putting it off and needed to put his nose to the grindstone. We stopped for a delightful breakfast at Ganache while we got to know more about each other. When we finished, we rode through the Lincoln tunnel into the city. I couldn’t drop him in front of his building because there was a parade going up his street, so we said goodbye to each other in front of the Empire State Building. I couldn’t think of a more romantic way to begin my Saturday…

This entry was posted on June 1, 2012, 10:00 AM and is filed under Gay Dating. You can follow any responses to this entry through RSS 2.0. You can leave a response, or trackback from your own site.