Clark Kent and I tried to find a way to be together over the week, but it just didn’t seem to work out. We tried Wednesday, but he had to work late on a pitch. Thursday was out because he was supposed to be going to the hospital to visit his friend who just had his hip replaced. He didn’t even get to do that because work had him there late. We settled on spending Friday together once again.

Friday morning when I arrived at work, two of my team members were walking out of the building. I asked them where they were headed, and they told me to check out the shuttle flyover on the Hudson. I had nothing on my plate for the morning, so I joined them. We staked out a spot and waited for the shuttle to arrive. I realized this was something CK would probably love to see, so I texted him asking if he was checking it out. He worked near the Hudson River and could be there within five minutes. He was completely unaware, so I told him to hurry up.

Unfortunately, he missed it, so I sent him pictures. I made my way back to work and got started with another slow day at the office. I spent a better portion of the afternoon working on the blog to get things squared away for the rest of the Friday releases.

In the middle of the afternoon, CK texted me. “How’s your day going baby?” I told him it was great. “I scoped out the shuttle, and now I’m out to lunch with one of our old interns and the rest of my team. I also have some fun news to share with you.” I learned that morning; one of the girls from my team was going to work at his agency. I couldn’t wait to tell him since she was one of my favorite coworkers. “I could use some fun news,” he added. I replied and told him I was “so excited to see you!”

He replied, “Me tooooooooo. Can’t wait :). What do you wanna do tonight baby? I’m home. Left office early. Gonna go with [his friend] to see [his other friend] in Brooklyn. Can we please do something free/cheap, yet priceless/memorable? That’s the sweet spot I’d like to hit. Well, one of the sweet spots… and by no means the sweetest ;).”

I quickly responded, “Yes. Glad to hear you get to go see him! How bout movie/Revenge night on the couch? You can come to my city oasis. Popcorn, wine, ice cream…” He immediately shot back, “#purrrrrrrrfection. You have no idea how happy you just made me =].” And to add the icing on the cake, I told him, “And, I didn’t shave for you today.” He loved when I had stubble. He liked the way it felt against his skin and liked how I looked with scruff.

When he finished at the hospital and was walking to the subway, he called me. He spent more time there than he expected. His friend was released and they took him home to get him settled in. He needed to go home and freshen up, and then he’d make his way to me.

I’d been sitting around since 6:00 waiting for him to arrive. I prepped the fillet mignons and the chicken for the grill, peeled the carrots and put them in a pot, and I even baked a pineapple upside down cake. After that, I laid on the couch waiting for his call in my motorcycle gear. Around 10:15, I finally got a text from him. Apparently he wasn’t paying attention and rode the PATH back into the city to 33rd street. He was so engulfed in his book, he completely missed the stop.

I was slightly annoyed because I didn’t fully buy his story. The PATH doesn’t simply arrive at Hoboken and turn right back around. It sits there for at least a good ten minutes without moving. He was obviously doing something else before coming over. At 9:45, he tweeted, “I saw the movie before starting the book, and I gotta say, the adaptation translates incredibly well.” He was referring to the Hunger Games he was reading. He was supposed to be in Hoboken at 9:30. How was he tweeting from under the Hudson River? Sure, I was stalking him a little, but I was always waiting for him. I was trying to figure out where he was. He wasn’t aware I was checking out his Twitter account, and I wanted to keep it that way. If he was going to cut me off from Grindr access (he blocked me), maybe I could find another way to check in periodically. (Yes, I’m aware how psycho I sound!) 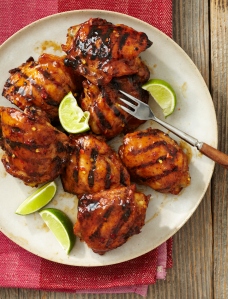 Finally, he made it. I arrived minutes after him to scoop him up on the motorcycle. No longer would we be taking the long way home. I was slightly annoyed and starving! I hadn’t even begun to cook yet.

When we parked the bike, I tore my helmet off and planted a big kiss on him. We continued to kiss on the street a few minutes before I persuaded him to come upstairs so I could work on dinner. I took everything to the grill and began to cook it while we lay in bed making out. When I started to strip his clothes off, he asked, “We’re going to have sex before we eat?” I explained things needed a little time to cook. “Not sex, but that doesn’t mean we can’t fool around first,” I added. With that I pounced right back on top of his naked body.

In the middle of making out I realized I needed to tend to the grill. I sprang out of bed, threw on a pair of shorts and ran outside. I caught it just in time before becoming a charred disaster. I gave CK a pair of shorts and a t-shirt to wear. We made our way to the kitchen and filled out plates. We sat on the couch and ate off the coffee table while we started Revenge. We’d already both seen it, but I was in the process of delofting my bed while doing so. Some of the show would still be fresh to me.

We spent the remainder of the night on the couch in front of the TV in each other’s embrace while the rest of my roommates and their friends prepared for a night on the town. It was such a nice change when they all vacated the apartment. We started to fool around a little on the couch, and eventually we made our way back to my bedroom, where some of the fun just began.

Warning: The following may be too graphic for some. We started slow, but things quickly progressed. Before long, I was penetrating him. He was incredibly loud and the window was open. I was expecting to hear one of the neighbors yell out. I was also afraid my roommate or her friend who was sleeping over would wake up. His moaning could have woken the building up. I was happy to learn the bed was holding up quite well and not making a ruckus this time. When he needed a break, the make out session resumed. Then things flipped and I found myself on my back with my legs in the air. Before long, he got excited and finished on my chest. I cleaned up, and we lay there a bit in each other’s embrace. “I really want you to shoot all over me like that,” he said. That was all it took. That psyched me out enough that all I could concentrate on was finishing. It was sure not to happen. After long, we were spooning. “Should I turn out the light?” he asked. With that, we dozed off intertwined like a pile of TV cables.

This entry was posted on June 4, 2012, 10:00 AM and is filed under Gay Dating. You can follow any responses to this entry through RSS 2.0. You can leave a response, or trackback from your own site.