Hope you are enjoying these. It will help bring the blog a little closer to real-time. If you’re keeping up with the stories chronologically, please skip down to this morning’s post first, then read this one. I think it’s a good one! Enjoy!

I hopped back on Grindr and decided to have some Asian delivery as well. We chatted a bit, and he sent me some pictures. I don’t typically go for Asians, but I liked his eagerness and spunk. He was hungry, and I still had an appetite.

After exchanging pictures and chatting a bit, I told him to come by. I showered to get the smell of sun screen and Armenian off me while I waited for him to arrive. I was already feeling like a bit of a hustler, but I also wanted to give myself a high-five in the same turn.

When he arrived, I answered the door and he came in. We chatted a bit on the bed before finally making a move and making out with him a bit. Slowly but surely, I got him naked. He was eager to please, and I really appreciated that. I think he cared more about how much I was enjoying it than he did himself.

Warning: The following may be too graphic for some. We tried numerous positions with each other. We never did anything really complicated, but I could tell this guy liked to have fun — And we were. However, I think he was enjoying it far more than I because he finished in no time flat. He really loved to bottom, and it showed. 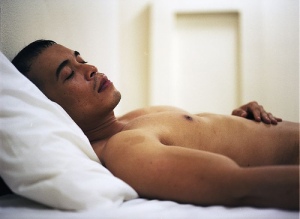 I gave him some time to recover while we chatted. When I thought enough time had passed by, I asked if he wanted to go again. I asked if he was able to rally the troops again. He said, “Sure. If you wanna go again. Pretty sure I can do it.” I proposed we move things over by the window. I was feeling quite adventurous now. I was on the 19th floor. I knew it wasn’t likely we’d be spotted, but the chance of it happening made the sex that much more exciting. He agreed with a grin from ear-to-ear.

We moved to the window with both his palms pressed against the glass and his legs spread. We had a really hot time with my arms wrapped around him. It was one of the most fun positions/situations I’d been in. With a fresh condom, we went at it again. This time, I wanted to see him finish. I used my hands to pleasure him while he moaned loudly. I wondered if my “neighbors” would hear us. He finished on the carpet below as he let out a loud moan, but sadly I wasn’t quite there yet. I continued to attempt to see if I could finish, but something just wasn’t quite there. I couldn’t concentrate, and I knew this was a lost cause.

I’d already been talking to a guy who asked if he could come by late night. I decided to stop trying and save up for the next guy’s arrival. He turned around and expressed his gratitude and told me how hot that was. He cleaned up and got dressed, and I said goodbye to yet another guy whose name I didn’t even remember.

I was such a whore! I’d just been with two strangers in the same evening, but I told myself I was on vacation. I justified it in my mind by telling myself when I returned to New York, I was going to be a good boy. I gave myself a weekend pass and decided to get it all out of my system. The maid at the Hilton was certainly going to have a large pile of towels to clean up in the morning…