Happy Birthday to Me!

My birthday finally arrived. Normally, I don’t celebrate my birthday much. But, this year, I had more to celebrate. I had a loving boyfriend who treated me very well. I’d already received a birthday present more than I ever could have expected. Clark Kent was everything I wanted in a man, but unfortunately I wouldn’t be able to spend the day with him.

I left him that morning as he went to pick up his mother from the airport. I spent the night before in his bed and got quite a birthday surprise — Trapeze School tickets. He needed to fully utilize the time his mother was visiting to find a new apartment. He’d been dragging his feet, and the time came for some serious looking. I fully understood.

I made my way home early that morning. My old roommate started off the social media messages with a text to wish me a happy birthday. He was shocked I was up so early. I made my way home and began to get ready for my plans. I was heading to the pier for the day for a picnic of sorts. I grabbed my beach chair and packed a blanket, bocce ball, speakers, wine and food into my beach bag and asked my sister if she’d give me a ride so I wouldn’t have to lug everything to the pier in Hoboken.

As the day went on, friends came and went. They’d spend some time with me relaxing in the sun and chowing down on snacks.

At one point, we all got into a political discussion about gay marriage. It was interesting. I’d never really thought about marriage before because it wasn’t a priority. I didn’t even have a boyfriend. Marriage was something far, far away. I assumed by the time I was ready, the rest of the country would accept that choice and allow me to do so. Now that I had a boyfriend, things were different. I was a lot more passionate about the topic.

When we got bored, we broke out the bocce balls and played a few rounds. As the sun was setting, we decided to pack up. My sister contacted K to see if she would be willing to host a BBQ in her back yard. She was thrilled with the idea and began preparing immediately. I brought over some food to cook and everyone else pitched in. Even my old roommate, who I hadn’t seen in about a year, showed up.

We ate our fill of picnic food and played beer pong. I played with one of my old college teammates. Whenever we played together, we usually cleaned up. We started a little rusty, but we were doing pretty well against my sister and one other girl as well. It was great to finally play again. I have such a competitive streak in me, and it’d been some time since we played.

When it was nearly time to go, we gathered everyone around the table for a few rounds of flip cup. It was getting late, and we decided it was time to hit the bar. The whole group packed up and headed out the door.

I was missing my man. We checked in with each other over text throughout the day, but the search wasn’t going well for him. I was having a great time, but I felt bad for him. I wanted him by my side, but priorities were in order.

Some people split off from the group to head home for the night. On the walk to the bar, I heard a crash right in front of me at one of the cars. All I could think about was, “What drunk a$$hole just slammed into a parked… W!?” “Hey guys,” he said as he popped up from between two cars with his bike. I was laughing hysterically. He was just in a BUI incident. He’s lucky he didn’t cause serious damage to the car or himself, but it was still very humorous.

We continued to McSwiggans, my favorite Hoboken bar, and met up with more of my friends who were already there. We had a blast drinking and dancing all night. I was hanging out with my old roommate reminiscing about the good ol’ times. I stepped outside at one point to call CK to say hi and see how things were going. He was happy to hear I was in good sorts, but sad he couldn’t be there with me. I too was sad he wasn’t there, but I understood. We didn’t talk long cause I was neglecting my friends, and he was neglecting his mother. 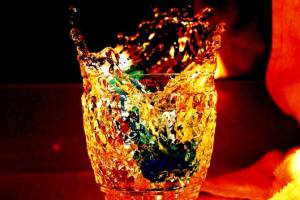 I went back inside and joined the fun once again. I was getting drunk quickly. People were constantly buying me drinks, and I can’t drink like I used to. I’m getting old. At 28, you’re no spring chicken anymore.

The time came for me to go home. I said goodbye to the remaining people at the bar and walked home. I didn’t want to be hungover the next day, so I kept things in check. It was going to be a big day for me. I texted my boyfriend while I walked home. I wished he was waiting for me in my bed, but I knew it was quite a different scene. He was in his apartment sharing his with his mother.

Overall, I had a great birthday! They aren’t usually this cheerful — Usually, I’m quite glum on my birthday. I think I purposely downplay my birthday so I’ll never be disappointed. This one was pretty great, starting with waking up next to my Superman. I would end the day a happy man, and looked forward to tomorrow, the next time I’d get to see CK, as well as meet his mother…

This entry was posted on June 18, 2012, 10:00 AM and is filed under Gay Dating. You can follow any responses to this entry through RSS 2.0. You can leave a response, or trackback from your own site.