The day after my birthday, CK and I made plans for me to meet his mother while she was in town. I celebrated my birthday the day before without him, but I still managed to have fun. I was incredibly excited to see him. I was also incredibly honored to meet his mother. I couldn’t believe he felt comfortable introducing me to her exactly one month from the date we first met, however, we’d grown extremely close in that short period of time.

There was a plan for me to meet CK, his mother, and three of his friends at Essex and Beauty on the Lower East Side for brunch. It was Mother’s Day, so I knew wherever we were going was going to be a sh*tshow! I was slightly anxious. I was more nervous about meeting the one friend I’d never met before than I was about his mother. I’m not sure why, but I didn’t feel any pressure there. I was pretty relaxed about it. Either way, I was missing my Superman terribly.

I arrived a few minutes late for our reservation. CK and his mother were still in transport, but the three friends had already sat at the table. One of them came to the front to greet me and take me to the table. I’d met him before when we all went to see Avengers together. As we ascended the staircase to our table, he informed me of a problem in the kitchen. He mentioned something about a leak and having to shut the kitchen down. There was new immediacy to our plans.

Per usual, CK was running quite late. I learned they were in a cab, but they were on the other side of Manhattan, however, he shared the good news he finally found a new apartment. It wasn’t in Brooklyn. It wasn’t on the Lower East Side. It was in Hell’s Kitchen. I was thrilled!!

We learned they wouldn’t arrive in time for us to order, and one of the friends began to protest in uproar. He argued with the staff until he learned of the true nature of the problem. The maître d’ offered to walk us over to their sister restaurant, The Stanton Social to ensure we got a table and were served quickly.

On the walk over, we happened upon CK and his mother getting out of their cab. He was in the process of calling me. I said hi to him and was introduced to his mother. She wasn’t what I expected at all. I’m not sure what my expectations were, but she certainly surpassed them. She was gorgeous and very lively. I immediately loved her spirit and energy.

We continued to the other restaurant. Not only did we get a table quickly, we were also served champagne to start. They more than made up for the inconvenience. On top of that, I feel we upgraded restaurants, not downgraded.

His mother took the time to hug all the other boys and say hi. She knew two of them from Miami, where CK grew up, so there was some catching up to do. CK was rather reserved in regards to PDA. We didn’t kiss, but I got a hefty hug. He whispered in my ear how much he missed me. We held hands under the table nearly the entire meal.

It was very nice being with everyone. The conversation flowed, and there was rarely an awkward moment. Our food was excellent, and we all enjoyed our meal. I was worried I’d feel like an outsider, not because his friends wouldn’t include me, but because they all already knew each other. I was the new guy. I didn’t know the stories. I didn’t know the inside jokes. That would take time. Generally, until I’m comfortable, I get quiet. I was worried they would think I was antisocial, which clearly isn’t the case.

If they hadn’t done enough to ensure we had a great experience, our lovely waitress brought us a plate of complimentary donuts to make up for what happened at Essex and Beauty. 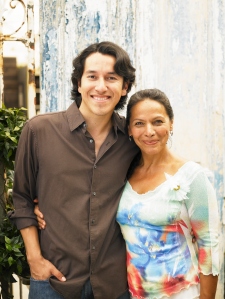 I really loved watching CK and his mother interact. She had a nickname she called him, and I found it adorable. They shared a lot of the same mannerisms. I watched her keep him in line (and made sure I took mental notes). They were incredible together, even with the hell they went through over that weekend to find him a new apartment. It was obvious the copious amounts of love they shared.

When we exited the restaurant, his mother returned to go to the bathroom. He took the opportunity to pull me in and give me the biggest kiss. It was quite a scene, but we didn’t care. His friends made comments, and he pointed out how he wouldn’t kiss me in front of his mother. Apparently, it made her slightly uncomfortable when he “flaunted his homosexuality.” I thought this was funny, because it’s the kind of thing I could hear coming out of my mother’s mouth.

I also learned that when I went to the restroom while we were eating, his mother expressed her approval to him. “He’s really cute,” he told me she added.

When she came back outside, we made plans to go back to his place and spend the rest of the evening on his roof watching the sunset. We stopped for a bottle of wine and some beers and went up to the roof with the batch of cookies I baked for his mother. Before heading up to the roof, CK and one of his friends were talking in the kitchen. That left myself and his mother in his living room to chat. I learned about all her dogs, as well as CK’s dog all living under her care. She told me how early she had to get up to take care of them the morning she flew out. We talked about what it takes to raise a dog and discussed CK’s desire to get a dog. He was constantly trying to take me shopping for a dog, but I couldn’t take care of one on my own. I wouldn’t have a dog until I lived with someone who would help me raise it. Maybe CK could fill that roll one day. 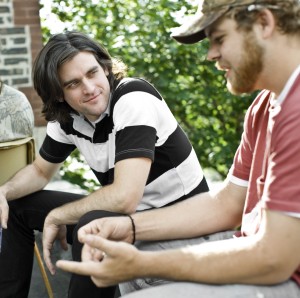 We spent a lot of time talking about cooking. CK’s friend was an avid cook, so we had a lot to chat about. I showed him my massive digital cookbook I created. I learned where CK inherited his lack of cooking skills. Apparently, his mother was a self-admitted non-chef. She barely cooked, so the two of them discussed their lack of skill in the kitchen, however, each had their specialty they could cook. I expressed my plan to teach CK how to cook, but ensure he wouldn’t cut his finger off again under my supervision.

After a while, a guy CK used to hook up with who lived in the building joined us. CK privately made a comment to me when we were downstairs how he may have seen us all through the window. He mentioned inviting him to join us, and I didn’t protest. My guard was up however. I had no idea how he’d treat me. After all, I was the one who got the man he had a crush on. They were almost roommates until it came to light he had a crush on CK, who told me he did not share the same feelings.

In the end, this guy was pretty cool. He wasn’t combative toward me in the slightest, and we actually got along. The conversation continued through the night. When this guy left, CK made an attempt to set him up with the friend who joined us from brunch. I really liked this guy. He seemed to get it. He was very realistic and had a great sense of humor. Of the friends I’d met so far, he was the one I felt I would get along with the best. When the old hookup left, CK’s friend called him to set up a date. This also killed two birds with one bullet. The old hookup would be tied up and would stay away from my man. Yes, I was getting territorial.

CK’s mother told us stories about him when he was a child, and I was really enjoying getting to know him, his mother and his friends. It was starting to get late, and CK and his mother still needed to get dinner. I needed to get home and get ready for work the next day. I too needed to eat something other than cookies. I said goodbye to CK’s mother with a big hug and CK walked me to the door.

We talked about how much we couldn’t wait until his mother left, not because either of us were tired of her, but because we were hungry for each other. We hadn’t slept together in days, and our animal instincts were growling. I said goodbye to him with a big kiss and made my way to the PATH to head home.

It was a very successful weekend. I had a great birthday, and apparently, I was a hit with CK’s mother. The whole day was a big success. I was all the more excited to be a bigger part of CK’s life, and I couldn’t wait for the next moment.

This entry was posted on June 19, 2012, 10:44 AM and is filed under Gay Dating. You can follow any responses to this entry through RSS 2.0. You can leave a response, or trackback from your own site.