Just because I said I wasn’t going to hit up Grindr constantly in search of sex from strangers didn’t mean I couldn’t satisfy myself with guys I’d already been with. This way they wouldn’t be strangers.

The last time I visited the bar manager in Hoboken, I had a great time. He had an amazing body, and we both really enjoyed each other. Wednesday, when I woke, he happened to be around. There had been a few days I suggested we get together, but he was always heading out-of-town for something. This time, he was available. There was a small snafu. He was sick. He had a sinus infection, so he was worried he’d get me sick. I told him it would be alright. We would simply avoid kissing each other. He told me to come up to his place, and he’d break out the glory hole again.

This visit was pretty much the same drill as my last visit to his apartment. He left the door unlocked. I was to walk in, undress, and saunter up to the hole in the sheet hung in the bathroom doorway. He was waiting for me on the other side. I hopped on my motorcycle and made my way to his place. I did as I was told.

Warning: The following may be too graphic for some. I removed my shorts and inserted myself into the opening. Immediately, he grabbed hold and began to orally pleasure me. It felt amazing. I wasn’t fully into the glory-hole thing, but it was making it a little more exciting. It wasn’t long before I pulled the curtain back once again. We started kissing each other all over each other’s bodies and swapping back to him on his knees. He was wearing his hat, which I’d already knocked on the floor so I could grab hold of his long flowing hair and his boots. It was an incredibly sexy look for him, and he knew it. I couldn’t keep my hands off his body.

He turned around and began grinding his backside against my crotch. I was incredibly turned on and excited. It felt so great to simply have his back pressed against my chest with one hand pulling across his chest so keep him close and the other pleasuring his impressive manhood. We continued this action until he was so excited he finished all over the bathroom floor. Everything felt amazing, and I was very close to finishing myself. However, this didn’t happen.

Once again, we moved things to the couch. He was all over me and everything felt incredible. I wanted to finish for him so badly. He was awaiting it with great anticipation ever since I first fooled around with him. We played for quite some time, and I kept losing my erection and gaining it again when I would pleasure his endowment. Throughout the whole visit, we were incredibly tempted to kiss, and came close many times, but at the last second withdrew again.

When a large period of time passed, he threw in the towel. He had to get on with his day. He was disappointed, and I was too. Not only disappointed, but also embarrassed. I wanted so much to please him. I wanted to give him exactly what he was looking for, but I came up short. 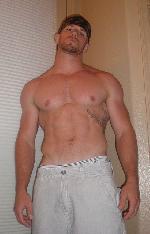 He walked into the bathroom and threw on a pair of sweatpants. As he walked, I could see his manhood swinging back-and-forth. It was such a turn-on. This is one thing that will always get my engines revving! He loved walking around with his package easily visible as well. It was something he was proud of, making it all the more sexy. I walked up to him and grabbed hold of it. I wish this was something I could do on the street. It would be so hot!

As I got dressed, I made a point to look around a bit. When I last left his place, I suspected he lived with his partner. I indeed confirmed my suspicion when I noticed there was only one bedroom. I also tried to casually scope out the pictures on the wall. The apartment was not decorated like two random roommates living together. It was definitely the residence of a loving couple. I felt a pang of guilt. This guy seemed like a good guy. I was disappointed in him for cheating on his lover. I didn’t know the dynamic between the two, but I never liked seeing infidelity. I wasn’t passing judgment, but I was putting myself in his mate’s shoes. I was a partnered man’s affair. Now I knew why we never had full penetration.

I said goodbye and made my way home. This would be the last time I would see him. I wouldn’t be the last time I chatted with him. He happened to sign on to Grindr about a week later. I was checking to see if I received any new messages and messaged him just to say hi. He was in Miami. I asked him if his man came with him, and he told me he was at home. Without knowing it, he slipped up and confirmed to me he had a man in his life. I pointed out to him how I caught him in a slip-up. When he originally mentioned the guy, he told me it was his roommate. He acknowledged his lie, and I told him we were cool. I had no hard feelings. It was his life, not mine. I then realized he was probably on Grindr down in Miami looking for a new piece of tail. I told him to enjoy himself, and with that, I said goodbye to him for probably the last time.

This entry was posted on May 10, 2012, 10:00 AM and is filed under Gay Dating. You can follow any responses to this entry through RSS 2.0. You can leave a response, or trackback from your own site.