Saturday night, we had a special celebration planned. Every year, to commemorate another year of my father being on the planet, my parents come visit, and we go out to dinner in New York City. Afterwards, we take in all the Christmas sights around town.

Even though I recently moved and invited my parents into town to help me move in, this year would be no different.

With a closet built and an entire chest of drawers assembled, we prepared to go out for dinner. My parents wanted to have dinner in Hoboken, so I decided to take them to my favorite restaurant I go to every year for my birthday, Piri Piri. I coordinated with my sister to meet her there to celebrate my father’s birthday.

We sat down for dinner and placed our appetizer orders. Somewhere along the way, we started to talk about me and the guy I was dating. For the first time, they didn’t change the subject to who my sister was dating at the time. I was shocked when my mother brought it up. I think they got the hint this was more than just a fling when I went into the city to spend the night. They were finally taking an interest in my dating life, and I loved it. They asked questions about what he did for a living and where he grew up. It was great. I was happy to talk about him.

Both my father and my mother were showing a vested interest. I wonder if my sister spoke to them about my unhappiness. It seems like a night-and-day shift from past history. I don’t care how the change came about. I’m just happy it happened. My dating life is a LARGE part of who I am, and for them to not share that with me was painful (However, I don’t share everything. I don’t quite know how to tell them I write a blog).

Our food arrived, and we had a very pleasant meal. My sister wasn’t feeling well, so when we were ready to make our way into the city, she went home instead to rest.

I took my parents to a cute shop in Hoboken, Michaelangela’s. They had the store decked out wall-to-wall with Christmas decorations and ornaments. We continued to the PATH as I asked them what they’d like to see. We have all grown tired of the standard Macy’s windows and the Rockefeller Christmas Tree. One of our favorite displays, the Sak’s snowflake window show, was discontinued. I proposed a new set of sights. We’d never done the Union Square shops, so I proposed we start there.

When we got off the PATH, we walked to Union Square. It wasn’t too cold out, so the walk wasn’t too bad. When we arrived, all the shops were closed for the night. I apologized, and we hopped into a cab to head uptown to Bloomingdale’s. This was another part of the city we never usually visited. The cab ride was cramped, and he was a very bad driver. I’ve never gotten so many red lights in the city in my life!

Bloomingdale’s was less than thrilling, so I suggested we head over towards Fifth Avenue. My mom kept commenting on how impressed she was. She couldn’t believe how quickly I could learn to navigate the city coming from a the farm life out in the country. I explained how easy it was. As I was showing them new landmarks they’d never visited before, my mother commented on how many she’d seen on her Sex in the City tour of New York City. (I found it ironic that subject came up. Even though I’ve only seen the show twice, I aspire to maintain my blog in the Sex in the City fashion).

She was finally piecing parts of the city she’d been to before together on a map in her mind. It was all starting to make sense to her. Who knew Sex in the City could teach you geography. We window shopped as we walked because many stores were closed. I took them to The Plaza Hotel. They were happy to see the inside since they’ve never been. 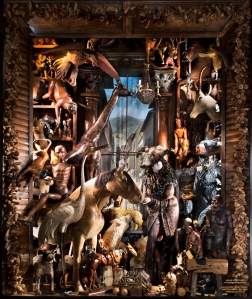 Afterwards, we walked past the Bergdorf Goodman window displays. These are some of my favorites since they are not childish and are often done tastefully. My parents took pictures in front of them and of each and every window. They really enjoyed them. I was happy to be sharing the joy with my parents after they spent the weekend substantially helping me settle in to my new apartment.

A small part of me wished Smiles joined us on our little adventure. It would have been nice for him to meet my parents and spend a little time with them, but we weren’t there yet. I also wanted him there because I love spending Christmas in the city with someone I care about. Last year, Broadway and I made a point to take in the Christmas sights. He even treated me The Plaza Hotel to my first drink ever bought for me by another man at. I wanted to share such happy times with someone else I cared about. However, this wasn’t possible or realistic. We weren’t at the meet the parents stage yet, and Smiles was home in bed recovering.

We continued to stroll down Fifth Avenue, but by this time, we were searching for some kind of dessert. We were striking out because it was around 11:00 at night. Most things had closed for the night. On top of that, I was walking around the city on a freshly sprained ankle — Probably not the best idea. My parents were starting to grow weary as well, so I suggested we head towards my office for a pit stop before hopping on the PATH home.

I realized we’d be passing McDonald’s, so I suggested we get hot fudge sundaes, cookies, and fries for dessert. My parents agreed. It would also eliminate the stop at my office because I could use the restrooms there.

I checked the PATH schedule. The next train was leaving in eight minutes, and the following one was another fifteen minutes after that. I urged them to hurry and bring our dessert with us. We hustled to the train, making it there with a little time to spare.

Luckily, we all got seats and relaxed on our ride home. I was really happy to do something nice for my parents in return for what they do for me. It was nice spending some quality time with them as well. I was also still on a high from their newfound interest in my love-life. It removed a big roadblock in our relationship. I could go to bed a happy man.

It was a long day, and we were all tuckered out. We would all surely sleep well the minute our heads touched the pillow.

This entry was posted on January 6, 2012, 10:00 AM and is filed under Gay Dating. You can follow any responses to this entry through RSS 2.0. You can leave a response, or trackback from your own site.