After our night galavanting around the village taking in the Halloween sights, I felt like I made a half step closer to Smiles. We hadn’t completely closed the gap, but seeing him two days in a row was a good step. We finally added sex to the mix again, and I was watching him slowly open up to me. Maybe this relationship did have potential. Maybe I just needed to be more patient. 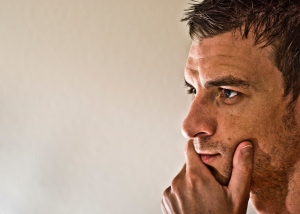 When it comes to relationships, my major downfall is over-thinking. Luckily, I have friends. And, I have you, my faithful readers. (Oops! Did I just address the audience?) Anyway, even though I don’t have a therapist, and at times I think I need one, I have my friends.

One of the guys I swam with in college, “J,” is a dedicated reader. So much so he harasses me when I don’t post on time. You can all thank him for keeping me on schedule. We’ve been through a lot together. He was almost one of the first people I told I was gay. On my ride back from telling my parents, I met him for lunch. I planned to tell him, but at the last minute I chickened out. I was waiting until I saw him again to tell him the news, but that didn’t happen until a few months later. I am constantly reaching out to him for advice and using him as my sound board. He’s more of a help to me than he realizes.

I have a wide array of friends and different reactions I can expect from them. Some I turn to for sex advice, like my friend who knew all about my philandering on Martha’s Vineyard, even when I was trying to cover it up. Some I turn to when I’m suspicious, like A, however some of those make me unnecessarily more suspicious. Some I turn to who I know will support whatever I’m saying, like D and K. J always gives me a fair and balanced viewpoint of the situation. Boston always gives me the harsh reality dose I need sometimes. Even Broadway weighs in sometimes for advice. And nothing makes me happier than when I get advice from my readers/newly found cheerleaders.

I take everything they all say, put it through my own filter to make decisions on how to proceed. They’re all great and I appreciate them all.

Many times Smiles would tell me about conversations he had with his ex to keep him centered and sane. He was finally reaching out to me to fulfill this role, and I was thrilled! He sent me an email asking me to call because he didn’t have my phone number. I called, and he explained how he got a replacement phone from Verizon and it was defective. I joked it was the user and not the device that was a problem. He was using a very old clamshell phone he’d used years ago.

He also told me he was in the middle of a breakdown. He had a lot of frustrations, many of which stemmed from work. Luckily, this was something he was opening up about to me recently, so I was able to give him some educated advice. He has a problem seeing things in the small picture. Too many times he looks at the big picture too soon and gets overwhelmed. I did my best to calm him down, and I think I did a fair job. Apparently, others were giving him contradictory advice to my position, but I stood my ground once again. I asked him what he really wanted. If there were no restrictions, what would make him happy. I questioned why he was settling for things just because he thought it was what he was supposed to be doing. It seemed like he was taking my advice to heart.

He told me he was going out to get ice cream instead of going for the run he planned on to exert his frustrations. As he read aloud the flavors in the cooler, I encouraged him to pick something indulgent and go home and have at it. He was stressing a lot and needed to take the time to relax. Sometimes I wonder if he forgets to step back and have fun.

When he got back to his apartment, he was feeling better and was ready to dive into his pint of Ben and Jerry’s. He thanked me for the pep talk and said goodnight.

I went back to watching TV on the couch, but I had a smile on my face. He turned to me in a time of need. I finally felt needed and appreciated. I wanted to be more integrated into his life, and this was a step in that direction. I sat there thrilled a the new development.

Was this the foundation of a relationship?

This entry was posted on December 2, 2011, 10:00 AM and is filed under Gay Dating. You can follow any responses to this entry through RSS 2.0. You can leave a response, or trackback from your own site.