Quite a Cast of Characters

Yesterday’s video got great reception, so I decided to include another video I came across lately thanks to Smiles. I think it’s amazing shots and a very emotional piece. On top of it, the music is spectacular! Hope you like it!

Monday came, and I had a very light day at work. I was hoping Smiles would ask me to grab dinner, but alas, nothing. I was always the one to initiate dates, and I needed to see if he would take the initiative for once.

I gave up all hope and went home without hearing from him. Surprisingly, while lounging on the couch in front of the TV, I received an email from Smiles. He wanted to know what I was up to for the night. I logged onto Facebook to chat with him. “They are partying in the streets below me. I’m getting cage crazy,” he typed. I forgot about the Halloween parade that was happening in his neighborhood since I didn’t partake in the Halloween festivities this year.

I responded to him, “What do you propose?” He suggested coming to me since it was so crazy where he lived. I explained I was already home, but I would come back into the city to meet him for dinner. When he learned this, he said, “Oh, no don’t do that. I thought you were still at work.” I suggested he could also come out to Hoboken, which prompted the response, “I’ll get [my friend] and keep myself entertained.” That’s not the response I was looking for. I told him I was bored and really didn’t mind coming back into the city (So much for playing hard-to-get). He told me he felt bad, but I assured him I was as close as I’d be if I were still at work.

We picked a convenient place where we could find each other in the melee of the Halloween parade. We walked around the West Village and found a cute spot to grab dinner, Hudson Corner Cafe. There was a slight wait, so we hit up the bar. Once again, I was a little taken aback by the charisma he showed everyone at the restaurant. From the host to the bar tender to the waitress. He always made it a point to be personal with them, and I found it incredibly sexy.

We ordered drinks outside our comfort zones at the bar until a table was made ready. I wasn’t 100% sure, but I thought he switched the drinks when the bartender served them. Interestingly enough, we tried the drinks the other was served. I didn’t like his, and he wasn’t thrilled with mine. When we sat at the table, we ordered another round, and the waitress clarified the confusion. It worked out well considering we liked the other’s drink better.

We ordered our food and chatted while we waited. I was surprised the conversation was flowing so  easily since I’d just seen Smiles the day before. When the food arrived, he commented on how little food I received. We split a brussel sprout salad, and he encouraged me to take a much larger portion. It was a very sweet gesture. We talked a lot about work and his aspirations. I was being very encouraging, but I also gave him my strong opinion on the situation. He was trying to find a typical office job while struggling to reinvigorate and old company he started years earlier. I knew that was his passion, and he would be very unhappy with a desk job. I told him he was at a great advantage. He didn’t have a comfortable job he wasn’t thrilled with that he was stuck with because it was a paycheck. He had the freedom to do whatever he wanted. He should just take a job to have a job. He took my advice to heart, which I really appreciated.

After dinner, we walked the streets. We passed someone in an amazing E.T. costume like I’d never seen before. We decided to grab desert at Magnolia’s Bakery before more walking. I made friends with a few British pigs in a blanket while waiting in line. We ate as we walked, and when we finished, we were near the PATH station. He asked, “What do you want to do now?” I was under the impression he was dropping me off, but that wasn’t the case. I didn’t think very quickly, but I suggested we head over to the parade and check it out. 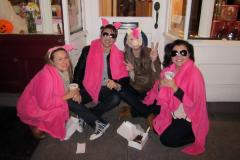 Smiles had his camera, so we snapped a lot of pictures of some special characters along the way. We finally arrived at the parade and watched for a short while. When we had our fill, we continued on. Smiles suggested we go into a bar. This sounded like a great idea to me considering I already thought our night was going to end a while ago.

When we walked into the bar, Julius’, Smiles needed to use the facilities, so I attempted to order us drinks. For some reason I had no luck with this task. Usually this is my forte since I’m 6′ 2″. While standing there, an old man was creepily eyeing me up. He wasn’t being nonchalant about it at all. His eyes were burning a hole in me. I made NO eye contact with him, even though he was standing two feet away from me. When Smiles returned, he magically had no problem getting service. He commented I wasn’t smiling, and that’s why I wasn’t getting service. (Probably cause I felt uncomfortable).

We drank our beers and had a chat about weight. I joked about the Magnolia’s stop and the beer and how it would affect my waist. He casually made a comment about my weight. This wasn’t the first time he alluded to my size. Over the summer, I was extremely confident about my body, but once fall arrived, I put on a few pounds. By no means was I fat, but I wasn’t as sexy as I was over the summer. I asked him,”What’s your waist size?” He told me and was shocked to learn mine, 32″, was only one inch larger than his. He couldn’t believe it. I wanted to point out to him we share similar body shapes, even though I think he thought I was heftier. I made a lot of jokes about losing weight not for him, but in spite of him. I was making it a serious goal to lose weight just to prove it to Smiles I could. He looked at me with skepticism. I still couldn’t believe he was basically calling me fat, even if it was playful.

After we finished our beers, we continued to a bar he frequented, Diablo Royale. He knew the bartender quite well. We found a nice corner to stand in and chat. We took in all the costumes around the room. I remember specifically realizing I didn’t feel 100% comfortable with Smiles yet. I questioned this. We’d been dating for some time, and while I enjoyed his company, I felt I couldn’t completely relax. It was as if I was on a constant audition.

When we had our fill of the night, he walked me to the waterfront. Even more than usual, there was quite a cast of characters walking around. He pointed out a piece or property he’s had his eye on for some time he’d like to develop. I agreed with him about the possibilities for the property. That night, he was opening up to me more about work. I liked learning about that side of his life. I shared a lot of the passions he had in that respect. Finally, he walked me back to the PATH. It was 12:30, and I knew I would be heading home. This was one time I wasn’t hoping/expecting to go home with him. I had to work the next day. I was still shocked and very pleasantly surprised the date didn’t end after dinner. He gave me a kiss, and I hopped on the PATH.

He was quite sweet and affectionate that night, but we still hadn’t completely clicked. Something was still missing, and I couldn’t quite put my finger on it…

This entry was posted on December 1, 2011, 10:00 AM and is filed under Gay Dating. You can follow any responses to this entry through RSS 2.0. You can leave a response, or trackback from your own site.