That weekend, N was going down to the Jersey Shore. His roommate has a house in Manasquan, and he was planning to possibly go Friday evening with one of his other roommates.

After my Friday off, and my new-found clarity, I didn’t care what N did anymore. I lost all the emotional attachment I had towards him. It was over. I just needed the opportunity to tell him. To be honest, for my own self-esteem, I needed to break things off with him before he tried to break it off with me. I didn’t want to give him the satisfaction.

Once again, I want to point out that I take full responsibility for my actions. I was wrong to cheat on N. It still bothers me to this day. It’s not who I am. Goes to show what happens when you act on suspicion.

When Friday evening arrived, I was at the gym. I got a text message from N explaining he didn’t know if he would be going to the shore that evening or the next morning. He wasn’t sure when his roommate wanted to go, but if he was staying in town for the night, he wanted to meet up.

I told him my plans for the night. I was going home, showering, hitting up the Zepplin Hall Biergarten with my sister and some friends. I told him he was welcome to tag along if he liked. I wanted to see him because I needed to talk to him, but I debated in my mind if a public setting was the place to have this chat. I was almost to the point of not caring. It was a monkey on my back and I needed it OFF!

While en route to the biergarten, I received a text from N telling me he would meet me there with his roommate. This threw a wrench in my plans because he wasn’t out to this roommate. It would be hard to have a serious conversation. 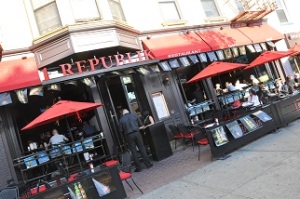 I texted N telling him my plans, but received no response. I sent numerous more texts asking him where he was, asking if he was still planning to meet up with me. But again, darkness. I started to check up on him on Grindr, but he was offline.

Finally, when 1:30am rolled around, I went home. When I got to my room, I laid on my bed and poked around Grindr a bit. All of a sudden, N popped up, and he was 17 miles away. Where the hell was he? Manasquan is not 17 miles away from Hoboken. We went from meeting up in Hoboken, to him being 17 miles away, obviously on his phone not responding to my text messages. What an as$hole! He was obviously up to no good at this point. I sent him a text message, “Well… Have a good weekend I guess…”

Over the course of the weekend I received one text Saturday afternoon from N. “We’re pulling up to Amanda’s house now, but I’m in the car with T. We’re going to get food soon. I’ll call you then.” When I didn’t hear back from him for the next day and a half, I called his roommate the morning of July 4th. She told me she hadn’t heard from him nor seen him all weekend. This was an interesting turn of events, considering he was supposed to be spending the weekend at her house. Pretty sure they should have run into each other at some point if that was the case.

On Monday afternoon, I received a text. N told me he was back from the shore. I texted him back immediately to come by so we could talk, but I got no response.

Later that afternoon, I received another text telling me he passed out on the couch all day and was running late for a party to watch the Macy’s fireworks. I decided to use his roommate for information once again, since when we spoke earlier, we talked about possibly meeting up later. I texted her asking if she’d seen N yet. She told me he just got back from the gym and was making food down in the kitchen. They must have spoken shortly after that because she texted back telling me he was going to a friend’s party. I never let on to either of them I knew he was lying to me about his weekend. I wanted to see his face when I called him on it.

After the fireworks, N decided to come back to Hoboken. He texted me to tell me so, but caveated it by telling me he smoked and was quite drunk. “I know we need to talk and it will prob be serious. I want to be somewhat coherent when we do.”

I begged him to just come over. I needed to get this monkey off. The more I learned about the deceit, the more twisted I felt. He didn’t respond to my texts. Once again, I would have to wait to have the discussion to end my insanity.