In the week leading up to San Francisco’s arrival in New York, I began to have doubts. I was staying up until 3:00 am most nights to talk to him. Morning runs became a thing of the past, and my waistline showed it. I went on a few dates since I left San Francisco, but none compared to the immediate, strong connection I had with him. I had no replacement, but I doubted my ability to continue a long-distance relationship.

As I drove to the airport I had panicky thoughts. What was I doing!? A man was flying 2,563 miles cross country to see me after spending two shorts days together. Was I ready for this commitment? I wasn’t worried about getting hurt because I was strong and had an open mind about us, but what if I broke his heart?

When he arrived, we shared a long, passionate kiss. We talked on the ride home. When we arrived at my apartment and hopped into bed relatively quickly. This time, I insisted on a condom. I wasn’t making that mistake with him again! I learned my lesson. He too was on the same page about the issue.

After a romp in the sack and quick shower, we traveled into the city. He made plans to meet one of his old friends. Little did I know, but old friend really meant old. He was 50 years old. They were flight attendants together way back in the day. That night, the three of us went to see Sister Act on Broadway.

During intermission, I was chatting with the 50 year-old. He was complaining about the difficulty of deciding if men were gay or straight. He pointed to one particularly sexy man I was eyeing, “Like him. Gay or straight? Who can tell?” At that moment, I looked over the man’s shoulder and noticed he was chatting with someone on Grindr.

I replied, “Gay!” and explained. I was tempted to immediately hop on Grindr and seek him out, but there was no possible way to pull it off while on a cross-country date. However, I still regret not talking to the sexy man.

At dinner following the show, I met yet another old friend — a 40 year-old. I’m a good sport and can hang with ease, but dinner became truly awkward when the discussion turned to age. San Francisco is seven years older than me. His friends pointed out that he’s never been the older man, and then they insisted I call him “daddy” while they filmed it on one a BlackBerry. I adamantly declined.

We met yet another friend at Barbasque. Finally, he was someone in my age bracket and one of the sweetest guys I’ve ever met. He welcomed me right off the bat and chatted me up most of the night. 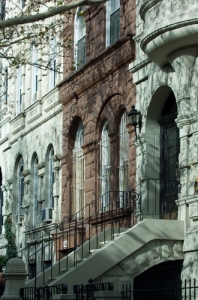 The next day, we met with yet another old roommate, this time on the Upper West Side. This time a married couple in their 50s whose guest room SF used to live in. The one husband who was home was not very welcoming to my presence. I felt incredibly awkward, and couldn’t wait to exit his apartment.

We wandered the city shopping, and that night, he made plans to meet three friends for dinner. Luckily, everyone at dinner was in their 30s, and the nice guy from the night before was there. So, I spent the night chatting with him while SF caught up with the others.

Throughout dinner, San Francisco had one hand on my leg, and the other on the leg of his best friend from New York. They were being a little more than just friendly. They had a long history, and I don’t get jealous. But, I started to feel a bit jaded.

After dinner, San Francisco, the best friend and I went to a bar. The two of them were tipsy, and the truth finally came out.

I learned he had been going to gay clubs in New York since the age of 19. Not only that, but he was the one known to be carrying K among his circle of friends. I am not anti-drug use, but the picture that was being painted was not something I wanted to hang on my wall.

The ride home that night on the PATH was a quiet one. I could tell it really bothered him that I wasn’t drinking with his friends, but I wasn’t feeling well after dinner. I asked him, “What’s wrong?” but he wouldn’t acknowledge his discontent. I explained my lack of participation was due to feeling ill after dinner, and he became slightly more relaxed.

As we waited for a cab, SF and two drunk “frat guys” exchanged shoulder checks and words. SF is roughly 5’ 5” — no match for these two — but his beer muscles were flexed. I attempted to avoid the situation by coaxing him into the cab. However, he escalated it by rolling down the window shouting back at them and antagonizing them.

He rationalized the situation as protecting me and didn’t stop ranting about how he could have taken them until he finally fell asleep. I was starting to have my feelings affirmed that a relationship between the two of us was not meant to be. I will always defend myself, but antagonizing drunk as$holes is infantile and useless.

The next day, we took my motorcycle out for a spin and spent the day on the pier with one of my friends. When SF left to get ice cream, she asked me how it was going. I explained to her the situation. It was written all over her face — this relationship had ended.

That night, my sister and a few of my friends came over for dinner. I graciously invited all of his friends to join, but all declined. I enjoyed seeing how much my friends accepted him, but at this point, I was completely turned off by his past. That night, we had sex again, but the passion was gone for me.

On his last day in NY, we met one final ex-roommate. While SF was a flight attendant, he lived with a hairdresser in a 1BR apt. Whenever SF was out of town, the hairdresser got the bed, but when SF returned, the hairdresser was relegated to the couch. Meanwhile, he was running a salon out of this 1BR apt. The whole idea was inconceivable to me. 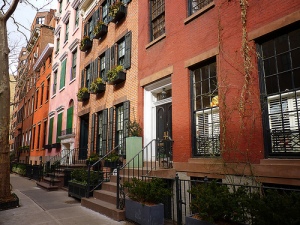 At one point during lunch, between reminiscings of cross dressing and coke lines while watching The Golden Girls, the hairdresser waved his hands at us and bluntly said, “So, what is this?” I was insulted by the tone in which the question was posed, but i wrote him off when I remembered the main purpose of the cross-country excursion was to visit me, not him.

We went home and had one last romp. At this point, I was going through the motions. It wasn’t so much his past that turned me off, as it was that he was hiding it from me.

When I dropped him at the airport, we kissed and said goodbye. SF was the still the sweetest man I ever met, and I truly did enjoy his company. But, I wasn’t completely heartbroken to see him off.

As I walked home after parking the car, I felt alone. I wasn’t sure if it was because he was by my side for the past 72 hours, or it was because I already missed him. Only time would tell.

This entry was posted on June 8, 2011, 10:00 AM and is filed under Gay Dating. You can follow any responses to this entry through RSS 2.0. You can leave a response, or trackback from your own site.