The Calm Before the Storm

CK and I had a rocky night, but before we laid our heads on the pillows, we reconciled our differences. There’s no fight we couldn’t get over. We were truly in love.

The next morning, I woke up early to work out with CK in his rooftop gym. It was our first time up there, and we were finally going to workout together, or at least we both thought so. It turned out, we had different ideas of working out. While CK was on his cleanse, I too was trying to lose weight. That was only going to happen for me if I did cardio workouts. Lifting wasn’t going to help me shed any pounds, and that was the priority over bulking up. He wasn’t willing to join me for cardio, and I wasn’t willing to lift, so we worked out at the same time on opposite ends of the gym. When he finished, I was nearly done my three-mile run, sweating profusely from head to toe. I wanted to take off my shirt and use it as a sweat rag, but I wasn’t sure if that was P.C. in his gym, and there were others working out as well. When I finished, we rode the elevator back down to his place so we could shower and get ready for work.

As per usual, we showered together. This had become a regular thing for us. We rarely showered alone anymore. We weren’t always making out or having sex in there: It just seemed a better use of both our time to shower together. We were beginning to work out a system between us. Our routine was falling into place.

The one thing I slightly resented when sleeping over at his apartment was the lack of breakfast. It was getting expensive for me to continuously purchase breakfast every time I slept there. I made sure to provide him with the necessary items for breakfast, but we hadn’t seemed to get to that stage at CK’s apartment. I wasn’t going to make a stink about that. One thing at a time. I was happy he finally had all his boxes unpacked and a bed to be honest. Breakfast could be dealt with down the road.

We got ready and were out the door. We’d also managed to figure out we could commute together to work. Originally, he was walking to a different subway than I was, but after further investigation, I learned we could both catch the necessary subways from the same station, and it would be the same distance for CK. Every morning we walked together and said goodbye with a kiss on the platform. It was a simple routine, but I was already thoroughly enjoying our morning walk to work together.

That night, CK had to work late. I went home and went to free outdoor yoga on the pier in Hoboken with my roommate instead of CK. We were spending the night apart. He had to be at work early the following morning for a pitch. When I got home from yoga, I made dinner, watched TV and fell asleep in my bed alone after chatting with CK about his day. 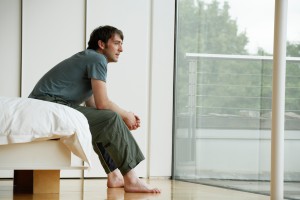 I woke up early the next morning feeling lost. The man I loved wasn’t there. It was shocking how much of a difference it made having him in my bed. I didn’t sleep nearly as well as I did when he was present. It was like I was an infant all over again missing my mother’s heartbeat. I needed to feel him close to me to get a good night’s sleep. I forced myself to get out of bed and motivated myself for a nice morning run along the Hudson. I stopped to take pictures for Instagram of the city where I knew my boyfriend was still soundly sleeping.

I ran back home, finished getting ready and stopped by the allergist for my shot before heading to work. I was really committing to getting in shape and losing weight, so that afternoon, I took lunch at the gym. I wanted a six-pack again, and I wanted shoulders, arms and pecs I could be proud of again. When I finished, I was in a spectacular mood. I shot CK a text to remind him how much I love him. I was also horny from the endorphins running through my veins. I started to sext him, telling him all the things I wished I could do to him in the gym shower.

Warning: The following may be too graphic for some. That’s always been a fantasy of mine, however, I never had any desire to do it with complete strangers. In an ideal world, CK and I would go to the same gym. We’d walk in together, but not acknowledge each other while we were in the gym working out. When he was finished, he would head into to the lockers to shower. He’d strip down in front of me, not acknowledging my existence before strutting to the shower of his choice. I would follow just behind and slip into his shower stall and close the curtain behind me. We’d have sex under the hot water without causing too much commotion to attract attention from others. After finishing inside him, I would rinse off and leave the shower like nothing happened. He would finished washing up and recovering from our tryst while I got dressed and headed home like nothing happened to start making dinner. He would follow a few minutes behind, and the first time we would acknowledge each other would be at the door where I’d welcome him home from a hard day’s work at the office with a big kiss. We’d eat our dinner with big smiles knowing we have an epic sex-life. Some day… 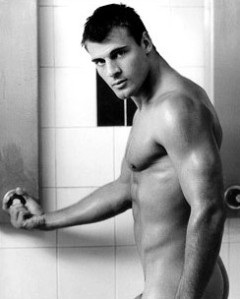 So in shorter terms, I described this situation to him over text. When I first began, he thought I meant to text someone else. He must have thought I was cheating on him with someone at the gym. I assured him the texts were for him and reminded him how the conversation begane explaining that this was my fantasy. I also pointed out the irony of the situation and detailed how he was the one who sexted the wrong person, not me (just like the first day we started chatting and he wanted me to come over for sex).

That night, I had plans to see Porgy and Bess with my coworker, so I didn’t see him again. I think he felt a bit left out, but I’d been coworkers with this girl for over five years, and the two of us had never hung out outside work together. I also had to head to our Chelsea office to work early in the morning. I took the opportunity of being off the radar a bit to hit the gym again that afternoon, this time for a run on the treadmill. I began thinking about CK and I in the gym once again, but it would remain a fantasy.

When I finished work, I went to my volleyball game, came home to shower and made my way into the city to spend the night in CK’s bed. We’d spent a decent amount of time apart considering we’d been spending every waking minute together outside our workdays. I was thrilled to see him and even more ecstatic I was sleeping with him that night. After a late-night romp, we dozed off in each other’s arms. When we woke in the morning, we hit the gym once again. Alas, we worked out on opposites sides of the gym once again.

When we finished, we continued our routine of getting ready for work and were out the door. That night, after work, I ran home and grabbed my things for the weekend. We had a big weekend coming up, and I had to pack for many different options. It was EXTREMELY frustrating because I wasn’t sure what we’d be doing, I wasn’t going to be home again until Sunday at the earliest, and it was Pride Weekend. I asked CK for help on what to pack, and he was of no use. The fight was quickly escalating over the phone, and my frustration level was at its peak. I wasn’t used to going to gay events and circuit parties, and I was feeling a lot of pressure. This was a burden I’d been carrying around for weeks, and the moment of truth was arriving. This was going to be my first full Pride Weekend, and I had no idea what I was about to get myself into. I was scared sh*tless!…