After my amazingly awful date with CK, we went home and went to bed. Waking up the next day with him in my bed was my true heaven. Not a day went by I didn’t appreciate waking up next to him, whether in his bed or my own. We were growing inseparable, however, that night we would spend apart. 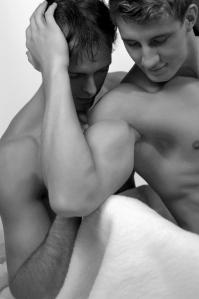 We spent the morning being lazy. That night, I was taking my roommate to J’s wedding. I’d planned to take her before I even met CK. Part of me wanted to pull her aside and ask if she minded if I took CK instead, but another part of me wasn’t sure I was ready for that. I wanted to be ready for that, but it was a big step. Just thinking about it, I could feel the eyes of the people around the room watching us — The two ‘mos dancing up a storm. I know I shouldn’t care about that. I know I need to get used to that, but I wasn’t quite sure I was ready yet.

We watched a few episodes of Game of Thrones while I got ready for the wedding. When the time came for me to head out with my roommate, I had a conversation with CK about his plans for the night. He was planning to hit up a circuit party. I was incredibly uneasy about this. I’d never been, but from the pictures and the stories I’d heard from others, as well as from CK’s own mouth, I was very apprehensive about the whole idea. I trusted CK, but then again, I didn’t. We’d only known each other two short months. Who’s to say he wouldn’t pop X and grind up on some guy all night? Who’s to say he wouldn’t fool around with said guy in the bathroom? Who’s to say he wouldn’t go home with said guy? We were growing very close, but I had no idea how CK would react to the temptations placed in front of him. All these thoughts, and many more, were swarming in my head. But, in spite of all this, I tried to be cool. I had to learn to trust CK. My baggage was not his fault. I would never tell him I didn’t want him to go without me. Hell, I didn’t even want to go myself, even if I was available. It would purely be his decision, however, that doesn’t mean I wouldn’t be a nervous wreck about the whole thing.

When the time came to say goodbye, I simply gave him some parting words gently expressing my concern. “Behave tonight,” I added. “What does that mean?” he asked. I simply just repeated myself. He knew what it meant, but he wanted me to prescribe for him exactly where the line was drawn. The thought of him in another man’s arms made my heart palpitate and beat uncontrollably. It gave me incredible anxiety to picture him sweaty and shirtless with his tongue in another man’s mouth. I wouldn’t be there to hold him back, and my imagination was running wild to fill in the blanks. Because of this, and because I didn’t want to seem psycho to him, he would have to define behaving. It didn’t instill confidence in my mind when he asked me “Well, what exactly is naughty?” If he had to ask, there was a good chance he’d cross the threshold of my comfort zone. I feared for the life of my relationship with CK. I was jealous of faceless men, and he hadn’t even walked in the door.

When I commit to a relationship, I commit fully to it. There are no other guys for me. That doesn’t go to say I don’t notice/admire a hot guy walking by, but I won’t ever act on my admiration. I won’t smile at him or wink. I’ll simply admire him as a gorgeous specimen of a man. I have had my transgressions in the past, but I have learned from these mistakes. I have committed to my man, and he is who I am with. This is incredibly frustrating because I have a very traditional view of a relationship, and the majority of other gay men have quite the opposite. To many of them, boyfriend just means the guy the spend more of their time with than the other guys they see/have sex with. I digress… 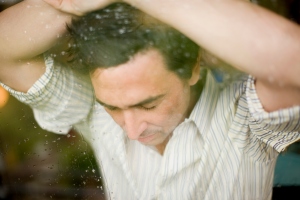 Between my regret of not taking him and his going to what I equate to a rave without me, I was an anxious nervous wreck. I kissed him goodbye as we dropped him off at the PATH to head back into the city. My roommate and I sped off to the wedding location and arrived just in time.

It was a gorgeous ceremony and the reception was a blast! I nearly cried watching J tear up as his gorgeous bride walked up the aisle. I pictured myself in his shoes with CK coming to meet my arm and knew I would be a complete mess. I tear up now just writing about it. There were parallels between this wedding and my relationship with CK as well. It was a marriage between a white bread dude and a Puerto Rican fireball (CK is Cuban). For instance, the ceremony was bilingual, as I imagine a ceremony between CK and I would be.

After one of the toasts, I even sent CK a text saying “Te amo con todo mi corazón.” (I love you with all my heart). I was really missing him and wished he was by my side.

When the time came to head home from the wedding, I said my goodbyes and reveled in the love and joy I witnessed between J and his wife. I hoped I would get to the blissful place they were someday. In the car on the way to the hotel, I called CK. I figured he’d already be at the circuit party or wasted or high, but I needed to try. As the phone rang, all my anxiety rose back to the surface. I certainly was not prepared for what was about to happen next…

This entry was posted on July 9, 2012, 10:00 AM and is filed under Gay Dating. You can follow any responses to this entry through RSS 2.0. You can leave a response, or trackback from your own site.