Thursday morning I said goodbye to CK in a rush to get him to work on time. I wasn’t going to get to see him that night, but that didn’t stop us from texting each other. Thursday night, between two of my volleyball games, I text him, “Missing you hard babe.” He was on my mind, even though I was concentrating on the game at hand. He responded, and when the game was over, I told him I was off to the bar that sponsors us to celebrate.

While at the bar, around 10:00, I text him: “Do I get to see you tomorrow?” I stepped outside to call him, but I got no answer. I left him a sweet message, but got no response. When I got home at midnight, I called again, but he didn’t pick up. I did a little stalking to see if he checked in anywhere on Foursquare or if Twitter would give me any leads, but no dice. I went to be disappointed and a bit worrisome. Apparently, much to my chagrin, I’m carrying trust baggage from previous relationships.

I woke in the morning to find a text message: “Hey my baby! Sorry. Bloody phone died last night =/. Of course you get to see me. I kinda need to see you. And hold you. And kiss you. And bite you. Sleep over =].” It helped brighten my day. I responded back asking if he’d rather come to my place, and I could give him a ride back into the city in the morning. I wanted to surprise him by baking cookies since his mother was coming. I thought we could bake them together, especially since there were no sharp objects involved. He texted back explaining he really needed to stay at his place so he could get ready for his mother’s arrival. I said, “Okay.” He responded asking if I wasn’t thrilled with the idea.

I called him to explain and ruined my surprise. He told me how sweet I am. We made plans for me to head home after my coworker’s sendoff, bake and come back into the city. He also told me the bad news he received that he didn’t get the apartment in Brooklyn. He was so disappointed. I have to secretly admit I wasn’t all that disappointed. I felt bad for him because he was so excited about the place, but it would have been tough for us. The island of Manhattan would have separated us, not brought us together. Selfishly, I did a little research on one-bedroom apartments in Hoboken and sent him a few links. 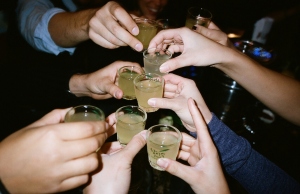 I didn’t have the best day at work. For starters, I had to say goodbye to one of my favorite coworkers. Luckily, she wasn’t going far and would be working with CK. On top of that, my coworkers neglected to celebrate my birthday. I myself don’t really celebrate my birthday, but as a department, we always do something nice for birthdays. This was the second year in-a-row skipping mine. And lastly, when everyone went for send-off drinks, I had to stay behind and finish work.

When I finished working, I met everyone at the bar a few drinks in. I met my freshly ex-coworker’s gay roommate and told him my Grindr story. He was all too familiar with Grind and said, “Awww. Now I want a boyfriend!” It was cute and nice to have a gay man to chat about my man with.

When I had my fill, I left to head to CK’s. When I got to his place, I asked if I could vent for a few minutes. I told him about my bad day and my coworkers’ neglect on the part of my birthday. He comforted me and managed to greatly cheer me up. He gave me my birthday card. I read it, and I was nearly brought to tears. It was incredibly sweet and thoughtful. We only knew each other a short period of time, but he completely knew me at my core. For my birthday, he bought us a session to learn trapeze. I jumped up and gave him the biggest hug. I pulled him in and deeply kissed him. I was so happy to be with him. He was an amazing man, and I was incredibly lucky.

The other part of my birthday present was him. He offered up his body for me to use any way I wanted. I was so turned on by his thoughtfulness and his passion. We climbed into bed and began groping and making out and our bodies intertwined as we stripped our clothes off.

Warning: The following may be too graphic for some. He laid on his back, and I pulled out the lube. When we were both prepped, I climbed on top of him, and the passionate lovemaking began. He felt amazing. This was a special birthday present — One I wouldn’t soon forget. I was incredibly happy just to spend my birthday with him, but to also get birthday sex was truly the icing on the birthday cake.

When we both finished, we laid in each other’s arms cuddling. As it often times was the case with him, the cuddling was almost as good as the actual sex. I always felt safe and comfortable with him. I was crazy for this guy, and I wanted him to be mine and mine alone.

We laid in bed that night watching TV until we fell asleep together with my arms wrapped around him. He was my perfect little spoon. I always slept soundly with him. This was turning out to be quite a special relationship.

I woke in the morning to quite an alarm. Without warning, he removed my boxers and began blowing me. It felt INCREDIBLE! I was already naturally excited, with my morning wood at full staff, but his mouth felt amazing that morning. This was one of the best I’d ever received.

After some time, I took control and began to stimulate my manhood with my hand. The saliva left on it provided amazing lubricant for me to get myself to the edge. While I was doing this, he was busy manually stimulating my prostate with his finger inserted inside me. It didn’t take him long, but he found my spot. It’d been almost a year since someone found that spot and treated it just right. It was a matter of seconds before I exploded all over while my body writhed in spasm. I couldn’t move. I couldn’t speak. I couldn’t even think. I was incapacitated. This was the best orgasm I’d had in a loonnnnggg time.

When I tried to upright myself after laying paralyzed in the bed for some time, I could barely walk. My legs had gone limp and weren’t able to support my weight. I would have nearly collapsed if it wasn’t for the doorframe for me to grip for support.

My old roommate texted me to wish me a happy birthday that morning. He couldn’t believe I was awake that early. The plan for that day was to head to the pier, and he wanted me to head there early. It was 8:00am. I wasn’t heading there that early.

That morning he had to early because his mother was arriving at LaGuardia Airport. He had mentioned his desire for us to meet while she was in town, and I was quite excited by the prospect. This was a big deal, but it wasn’t. I was pretty relaxed in these types of situations, so it wasn’t stressful, but meeting his mother was no small deal. It showed he really cared about me enough to introduce us. I didn’t take it lightly and hoped it would come to fruition.

I said goodbye while he hopped in a cab to the airport and made my way back to Hoboken to get ready to celebrate another year on Earth.

This entry was posted on June 15, 2012, 10:00 AM and is filed under Gay Dating. You can follow any responses to this entry through RSS 2.0. You can leave a response, or trackback from your own site.