My night had gone pretty smoothly. I had a great time, there was minimal drama and I ended the night with a great guy, Smiles.

I did my best to put all the food away before heading to bed the night before. It was a fairly easy cleanup. However, that left all the dishes to be done and a lot of cleaning around the apartment.

I woke at a decent hour and didn’t even have a hint of hangover, which is surprising considering I drank sangria most of the night. My teammate from Maryland woke shortly after me. She needed to go into the city to catch a bus home, but was going to stick around for breakfast before she left. She asked if she could have some of the leftovers, and I prepared a few things for her.

In the meantime, Smiles emerged from my bed, and we made coffee for ourselves with my Keurig Elite Brewer coffee machine. It’s perfect because we can each pick our flavor of tasty Green Mountain Coffee, and we don’t have to wait for a whole pot to brew. It’s absolutely great! (Yes, I’m plugging them because I absolutely love that thing, and I’m hoping they read this and feel gracious enough to reach out to me… Wishful thinking…) 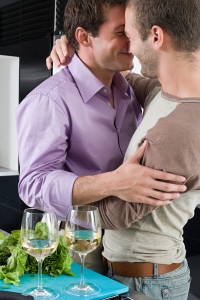 After she ate, my teammate asked for directions to the bus back into the city to Port Authority and was on her way. Smiles had made his way back to my bedroom and got dressed to head home. I was hoping he’d stick around for a little bit (I wasn’t expecting him to help clean), but I was mistaken. I would have liked to spend a lil more time with him, but he had plans.

I said goodbye to him with a kiss and a hug as I thanked him for everything from the night before.

My other roommate who was stuck in Canada arrived home in the meantime. He asked about the party. He was very disappointed he missed it. He’d been to three of the previous four even though we’d only been roommates six months.

Then, I was left with my mess. I did all the dishes and ran the dishwasher. I put all the wine in the wine fridge. I poured all the leftover sangria down the drain trying not to gag. I put all the liquor no one drank away. And then I swept the floors. They hadn’t been swept since we moved in. 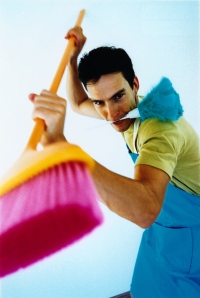 I did all this while my roommates sat on the couch watching TV. My happy mood had soured. I didn’t expect them to help. I made it clear to them it was my party. Therefore it was my mess to clean up. However, after asking for permission, the roommate that was away had no problem scarfing down a plate of the food and leaving it in the sink for me to clean up. And, the other roommate, who attended the party and did nothing to help me prepare didn’t lift a finger. I didn’t resent that they weren’t helping me clean up. I more resented that I worked my ass off to get the apartment in shape, and they didn’t offer one iota of gratitude. Sure, it was out of selfish desires that I worked so hard and fast. But, they both greatly benefited from my efforts.

The cleaning was over surprisingly fast. When I finished, I planted myself on the couch for the remainder of the evening.

Later than evening, I witnessed my roommate come out of her room and heat up a plateful of the leftovers from the night before. I really resented this, purely because she didn’t take the two seconds to ask me if she could have it. I can be generous at times, but she didn’t pay one cent for it and did nothing to prepare it. The least she could do is ask.

So, I did what any mature roommate would do. When she went into her room, I left a passive aggressive post-it on the fridge saying, “If you didn’t lift a finger to purchase this food or make it, then don’t lift a finger to eat it.” I’m not sure why I was in such a p*ssy mood, but it really got under my skin. I think I was just feeling very under-appreciated overall, and I was taking it out on her.

Later she emerged once again from her room. As she passed the fridge, she read the note, made a noise of discontent and returned to her room.

I had the immediate satisfaction of getting under her skin as much as she did mine, but I would certainly have to deal with the ramifications of that later. I returned to watching TV and being in a cranky mood for the rest of the night. I wished I’d spent the day with Smiles. I was in such a good mood from spending time with him the night before. Hopefully tomorrow would bring happier times…

This entry was posted on January 13, 2012, 10:00 AM and is filed under Gay Dating. You can follow any responses to this entry through RSS 2.0. You can leave a response, or trackback from your own site.