It’s amazing what the power of suggestion can do to you. All it takes is for someone to put an idea in your head, and you are rendered incapacitated. It can consume you and become all you think about. This power was wielded over me by who other than the 40 y.o.

Following my birthday weekend, I reserved Sunday night to sit my single ass on the couch and catch up on the DVR. I was all but finished watching everything I taped the week before when I got a a text message from the 40 y.o. “Recover from your birthday present? Want another bj?” 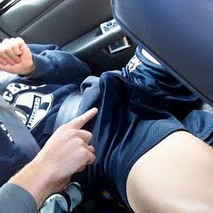 That’s all it took. The seed was planted. My mind raced back to the last time he came by, and all I could think about was how good it felt. I told him to come by my apartment. When he asked if I could come to his place, I became a little uneasy. I wasn’t sure about not being on my home turf. He wanted to host because he was doing laundry and packing for a business trip the next day and he “figured I’d take a break to blow you. lol.”

I explained to him I felt more comfortable in my own setting. To which he responded, “Understand. It’ll just have to be a raincheck then. I’ll be back in a few days.”

I tried my hand at being clever to lure him to my apartment. “Put a load in… Then I’ll put a load in, and you’ll be back just in time to switch it over. You know you want to.”

We sparred back-and-forth with our words, both trying to convince the other to come to them. Just when I had him convinced to make the 7 block trek to my apartment, one of my roommates came home. I was so close, and yet so far away. With that, I finally agreed to go to his place. He lives in the same building as one of my friends, and I needed to drop something off at her apartment.

When I arrived, he gave me a hug. He proceeded to show me around his apartment, the whole time playing with himself in his gym shorts. Finally he pulled me into his bedroom and sat me down on the bed. He pulled my shorts down just enough so he could get working on me. I took his shirt off and began to play with his nipples. We were both enjoying ourselves. He pulled off his shorts and sat naked on the hardwood. His member was BIG just as I remembered from the first time, however, he never got fully erect. I remembered this from our first encounter and how worried I was it would happen to me at the age of 40.

Then he did something that both shocked and disgusted me. He pulled out a small bottle, untwisted the cap, held it to his nose and heavily snorted in each nostril. I don’t have a lot of experience with drugs, so I wasn’t fully aware of what was going on.

I didn’t really want to look at him anymore. I told him to come up on the bed so I could lay back. He disagreed and said he wanted to stay on the floor. I complied.

It wasn’t much longer before my whole body was tingling, and I was ready to finish. I let him know how close I was by the volume of my moaning. He pulled me in deeper and took everything I had to give. When I was depleted, he commented, “Wow, that was a lot!”

I responded with the only thing I could think of. “Don’t say I didn’t warn you…”

He walked into his bathroom to rinse his mouth as I got dressed. When he came back into the bedroom, he pulled on his shorts and shirt and said, “I’ll walk out with you. I need to take the dog for a walk.”

As we walked down the stairs, we discussed the noise level of his neighbors. I began to wonder about his noise level. That’s when the thought crossed my mind, how many of “us” are there in his roster?

We got outside, and I said goodbye to both him and the dog. On that walk home, I was still feeling euphoric from the bj, but I also decided this was the last time I would have a sexual encounter with the 40 y.o. It was fun, but there were too many things about the whole situation that made me uncomfortable.

After that, he began stalking me on Grindr — heavily. After some time, I blocked him so he could no longer track my whereabouts. For a little while, I would respond to his text messages, but as of late, I’ve taken to simply ignoring him. I’m dreading the day I run into him on the street.

This entry was posted on June 17, 2011, 10:00 AM and is filed under Gay Dating. You can follow any responses to this entry through RSS 2.0. You can leave a response, or trackback from your own site.