Visit From the Sugar Plumm Fairies

We all know that red roses are the queen of Valentine’s Day, and chocolate is king. If you read my blog, you know just how much I like chocolate. Although I never heard of them before this weekend, I am thrilled to introduce Sugar and Plumm, the Purveyors of Yumm!

Chef Pichet Ong spoke to our intimate group about the delicious creations they are whipping up. Perhaps best known as a judge on Top Chef: Just Desserts, award-winning corporate pastry Chef Ong is the whimsical creator behind the sweet and savory confections of Sugar and Plumm. He combines the fond flavors of his childhood with modern cooking techniques to create culinary offerings that are seasonal, pure, light, and delightfully experimental, yet nostalgic.

After introducing us to the brand, he was kind enough to treat us to their For The Love of Chocolate gorgeously packaged box of some of their finest chocolate creations. It is an amazing assortment of hand-crafted artisan chocolates with origins from around the world. This box included two white chocolate blueberry and six pure dark Mexican chocolate ganache. However, the pleasant surprises didn’t end there. Hidden below were chocolates with flavors and aromas consisting of raspberry, vanilla, coconut, hazelnut praline, jasmine tea infused ganache, ginger, milk chocolate and pure dark Peruvian. On top of allowing us to sample some of their finest chocolate creations, we were also give a pair of their brightly colored, delicate French macaroons. It was all I could do to keep myself from digging in immediately.

When I untied the ribbon and opened my brightly colored box, I was blown away by the impeccably pristine chocolates before me. They were almost too pretty to eat. Luckily, that would not stop me. What did stop me was the thought of my boyfriend waiting for me at home. There’s something incredibly romantic about fine artisan chocolates that makes it sinful not to share with a loved one. 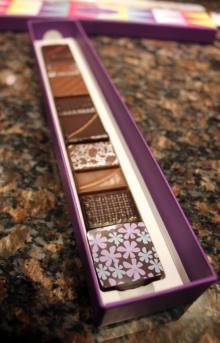 On our anniversary, the day before Valentine’s day, I told my boyfriend I had a surprise for him. I told him to close his eyes and open his mouth. After a bit of trepidation, he complied, and boy was he glad he did. His face lit up from ear to ear as he savored his first bite of the dark chocolate ganache-filled heart. I sampled the white chocolate blueberry-filled heart. I’d never tasted anything so complex and exquisite. It was heaven. I was reminded of the first time blueberry wine touched my lips, and I had to have more. The combination of blueberry and white chocolate was pure genius. I forced myself to put the box away so I could savor these the little bits of chocolate heaven for a few days; I simply did not want the experience to end!

There was no way I could possibly ignore the fresh macaroons waiting the ultimate demise. Although there were two, I wanted the best of both worlds. As it’s rather impossible to split a macaroon, I simply bit half for myself and passed the other half to my boyfriend. We made long extended moans as we enjoyed these incredible indulgences, and that was just the vanilla macaroon. I repeated our ritual with the strawberry poppy-seed, and the moans of happiness only grew louder. The flavors transported me back to the beach with my parents snacking on strawberry Twizzlers.

It was amazing how incredibly nostalgic Sugar and Plumm’s confectionaries were. How could so much be contained in such a small morsel? 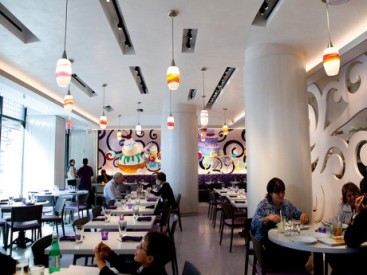 I was shocked to learn that Sugar and Plumm serve breakfast, lunch, dinner, weekend brunch, and every craving in between. I was expecting a purveyor of sweets, but they create works of art from homemade ice cream and macaroons, to house-smoked salmon and Berkshire pulled pork, our team of master chefs, bakers, and chocolatiers are purveyors of all things delicious and delightful. The bake shop even makes everything handmade, from scratch. The only problem you’ll find is deciding what to order (and possibly that top button on your pants).

Although it’s too late to place an order for Valentine’s Day delivery, if you’re looking for that perfect way to show the special person in your life just how much they mean to you, this is a perfect for Valentine’s Day — Or any of the other 364 days of the year. The have gift boxes for every budget and an in-store experience you won’t soon forget! This Upper West Side spot with Parisian charm and a downtown vibe is sure to knock the socks off anyone who enters and will certainly not disappoint!

After meeting the ginger, I was talking to a very attractive resident of Martha’s Vineyard who is originally from Russia. He is very attractive and very sexual. I attempted to invite him to meet us at the beach or come out with us to the bar for two straight nights, but he declined every time.

Instead, while out to dinner one night before hitting the bar scene, I came across a guy on Grindr who happened to be at the same restaurant. He seemed nice enough. When we finished our meal, I walked up to the bar to meet him and introduce myself. My friends weren’t far behind. It took all of three seconds to realize I would not be interested in this man from New York City.

As soon as he opened his mouth, it was quite evident he was a big ol’ mo. He is a 6’4″ ball of flaming queen. I couldn’t get out of there soon enough. Of course, I was too polite to simply walk away, and we exchanged numbers. And, just my luck, he was heading to the same bar my friends and I were going to. I did my best to hustle my group along except one of my friends stepped in to “help me out.” She didn’t quite realize how uninterested I was in this guy.

Our group split, and half of us went to the bar — The other half went home to bed. The Grindr guy and his straight friends followed shortly behind us. All the straight guys began hitting on the girls with me. I put a pylon between the Grindr guy and I so I wouldn’t have to engage him on conversation further. He started to chat with one of my female friends while I stood in the background and made myself as unattractive as possible. My friends and I were trying to see who could look more pregnant. Classy, I know. When we all finished our one beer, we moved on, but not before Grindr Guy grabbed me and tried to plan a beach trip for the following day. He was going to text me where they were, and we were expected to join them. That never happened. 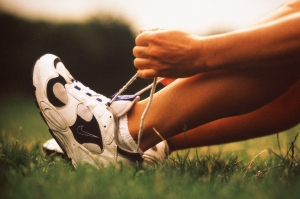 So, just when I didn’t think I could dive any deeper into casual sex, I come to surprise even myself. The following morning, I was chatting with a good looking guy from Boston who was very discreet and had a girlfriend. He was looking for some action. I was only half interested. I was still trying to make things happen with the Russian. We were heavily flirting and exchanging pictures. He asked if I found any other hot guys on the island. I replied, “I’ve yet to see any serious talent since I’ve arrived.” I wasn’t about to share the Russian with him. That’s all I needed was for him to scoop him out from under me. He was very interested in me, but explained he was already making plans with another guy to have some fun in the woods.

At that point, he proposed the three of us get together. I didn’t know how to react. He already established he was not interested in sex but was looking just to fool around — “circle jerk” as he put it. I cautiously agreed to participate but needed more specifics before I would feel completely comfortable. At that moment, the Russian started responding.

I tried to see if he was interested in meeting up that morning instead of the party in the woods. I would go for a run to his place and spend some time there before anyone was even out of bed. That’s when I found out he was going to be the third party in the circle jerk. It’s also when the guy with the girlfriend started scolding me for trying to steal the Russian away from him. I explained I had been talking to him for some time. He of course called me on my earlier comment about the island’s lack of talent. It was slightly awkward, but we got passed it.

I learned the other two had already chosen a spot in the woods to meet. It happened to be 3.5 miles from where I was staying. I also learned I had slightly less than a half hour to get there. I threw on shorts, shoes,  popped in my iPod and took off towards the site. I arrived shortly after the other two. The spot they chose was a construction site in the middle of the woods. It looked like a giant sinkhole.

When we all gathered, we tried to find a place to get out of site. I vetoed the original plan of walking into the woods, namely because I didn’t want to spend the rest of my vacation covered in poison ivy rashes. In the center of this hole in the ground were construction vehicles. Although they were the center of attention from all sides of the site, we managed to duck between them and get out of site.

(Just a warning, the following may get graphic) Almost immediately, the other two dropped their shorts to their ankles and began to jerk off. I followed suit. Every began to participate and aid each other in different combinations between the three of us. I was dripping with sweat from my long sprint, which surprisingly was a turn on for the other two. It brought me a little more attention as well. This was the first time I participated in anything with more than one other, so I was slightly intimidated. However, it was easier to relax a bit because I knew it wasn’t going to escalate to penetration. We all had our fun and eventually finished ourselves off in succession. I was on quite a high. Between hooking up in public, doing it with two guys, the run, and climaxing, I was in a different world. I had no idea how I was going to make the run back home. My legs were weak.

We decided it wasn’t a good idea to linger, especially the paranoid guy who had a girlfriend. He split off and the Russian and I casually walked back to the highway. He offered to give me a ride, and I graciously accepted. This would also help cut down on the time I was away. We had casual conversation the whole way back about our inability to connect with just the two of us earlier in the week and the other guy’s situation playing both sides of the fence. He dropped me near the house I was staying at, and we agreed to touch base later about hanging out.