Saturday went by and I didn’t talk to Smiles all that much. I was disappointed about being rejected and was still wondering if it was my own issues preventing us from getting between the sheets. 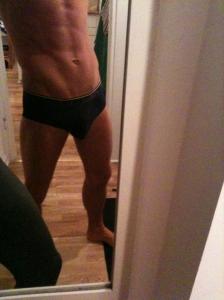 I sent him dirty text messages (not me in the picture) when I woke up about what I wanted to do to him, and surprisingly, he was responding positively. I couldn’t understand why he would be playful over text, but when push came to shove, I got the cold shoulder.

I wasn’t going to give up on him over this. Sex is important, but it’s certainly not the end all and be all of a relationship for me.

He invited me to come into the city to grab brunch with him and a friend. We made plans to spend a majority of the day together. I was on a mission to seduce him once again. After my chat with Boston, I was ready to broach the subject if I was denied once again.

And with that, I hopped on my motorcycle and rode into the city through the Holland Tunnel. I parked on the street and walked up the stairs to his apartment. I brought an extra helmet with me so I could throw Smiles on the back if we were traveling around the city.

He decided we should walk to brunch since it was such a nice day, and we weren’t in a rush. We stopped at Starbucks to grab coffees while we walked. As we made our way to the West Village, we popped into a few stores, from clothing to eyewear stores. 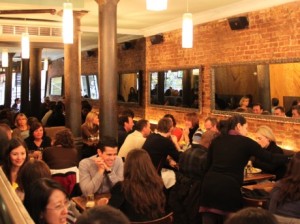 Our destination was a familiar one. Smiles’ friend was meeting us at Extra Virgin. I had no idea who this friend was, but Smiles told me I probably met him previously at his birthday gathering. The three of us arrived at the restaurant around the same time. We all sat at a table in the back corner. Indeed I had been introduced to the friend previously, but we only chatted briefly.

Ironically enough, I couldn’t tell which team this friend played for. It wasn’t until he asked advice about a woman I realized he was heterosexual. There was nothing flamboyant about him, so it was no reflection on him that I couldn’t tell. It was more of a guilt by association thing.

He was a really nice guy, and I was thrilled to be included in the conversation throughout brunch. I am good at diving right in, but when two people in a group of three have a strong long-standing friendship, the third can be marginalized at times. This was not the case. The friend was quite interested in what I do as he works in a similar field of communications.

When brunch was over, we said goodbye to the friend. Smiles and I were on the hunt for a branch of his bank make a deposit. In the meantime, we hit up a few stores and walked around most of SoHo. Smiles was scoping out every bakery we passed along the way. I could tell he wanted something to satiate his sweet tooth. I was egging him on as we walked, but he resisted.

Finally, we made our way back to his apartment. I had been getting calls and emails from work all day. It became necessary for me to go into the office. Luckily, I had the motorcycle in the city with me, so I could shoot up there quickly without issue.

Smiles had plans to meet a friend about a business proposal over coffee, so I told him I would give him a ride on my way to my office. He got changed while I waited, and we were off.

I always like having him on the bike behind me. He’s the first guy to truly embrace the situation. He always inches forward on the seat so he’s right up against me, and he tightly wraps his arms around me. I relish every minute of it. When we stop at a traffic light, I make it a point to rub his leg or grab his hand. I find it romantic ironically enough. 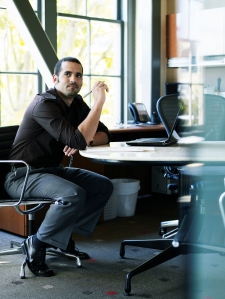 After sitting in tunnel traffic near his apartment, I finally arrived. I rang the bell and climbed the stairs hoping to find a happy ending once I reached the top…

This entry was posted on December 14, 2011, 10:00 AM and is filed under Gay Dating. You can follow any responses to this entry through RSS 2.0. You can leave a response, or trackback from your own site.