After my amazing date with Smiles Saturday into Sunday, I was in heaven. Of course that only means I couldn’t wait to see him again! I had to keep cool. I couldn’t get all mushy on him already. 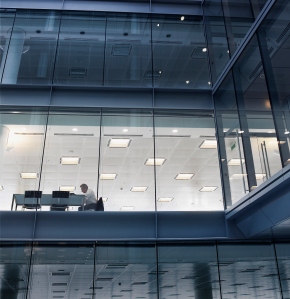 Before it arrived, I knew Monday would be hell for me. We had a pitch early Tuesday morning, so I would be working straight into the night on Monday to finish preparing. I was right. I barely had time to shoot him a text. Smiles also had a busy day, as a friend was in town with whom he needed to talk business. I typed, “Hey sexy man… Any chance I can interest you in dinner tomorrow or Wed night?” He responded, “Working out my schedule. [My friend] hasn’t told me what his is yet…” I told him to keep me posted. My schedule was fluid.

Following the pitch Tuesday morning, my team came back into the city and went out to lunch at Keen’s. I ate a whole lot more than I needed to.

After lunch, I went back to the office, and called it an early day. My boss told me to go home, but I had other ideas. I called Smiles to see if he’d be interested in a run in Central Park. We’d talked about running together once before, and I rather liked the idea. It worked out well when I called. I explained I was finished work for the day. He happened to be free and was up for the idea. We planned to meet at Columbus Circle in a half hour.

I ran up to the park from my office rather than taking the subway because I thought it might be quicker. I was already regretting such a big lunch. When he arrived, I walked up to him and gave him a light kiss. We walked into the park as we talked about the time passed since we last saw each other. I liked this conversation. He seemed to be opening up, and the relationship seemed to continue to grow. 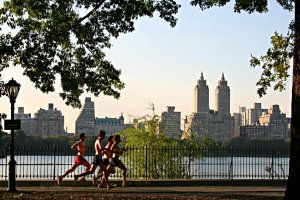 Once we got to a running path, we picked up the pace. We chatted as we ran. I know it’s not the most romantic thing for two men to do together, but we both are very active. He runs triathlons regularly, and being a division I college swimmer, I try to stay in shape every chance I get.

I learned a lot about his plans with the visiting friend. I gave him some of my thoughts on his proposal, but he clearly knew what he was doing. He’s a very smart and entrepreneurial guy. I love that about him.

As we ran, the connection seemed to drop off. The conversation started to feel a bit forced. There were awkward pauses, and periods of silence, searching for something to talk about. Looking back, I feel like he was distracted. I don’t think he was fully present since he had so much on his mind.

We ran a good distance, but we clocked only an average pace. Neither of us had run in a few weeks. At one point, we needed to stop so he could take a phone call. That phone call turned into three because he had to take care of something from one of his projects. We were walking again while he talked. I didn’t feel it was rude, because he was working. It wasn’t even 5:00 yet. I had to respect that. But, it wasn’t what I had in mind when I called him to get out for a run.

When he finished his calls, we began to run again. As we neared where we entered the park, we cooled down by walking. Somehow we got on the topic of my size 14 feet. He was gibing me and poking fun at them. “There will be no drag for you! Not unless you are G.I. Jane.” I laughed. The thought of size 14 high heels was hilarious. 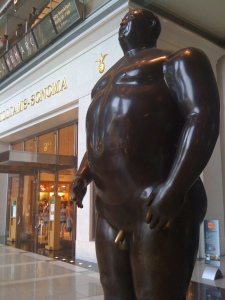 I suggested we go into the Time Warner Center so I could relieve myself. He agreed as we joked about the fat naked statues that adorn the lobby. He told me he wanted to take a picture of me molesting it. I declined, but we still joked about it for some time.

Smiles hadn’t had lunch, so after the bathroom, he was looking to grab a quick bite. We descended into Whole Foods and he whipped up a salad. We found a table so he could eat and I could sip on my iced tea to rehydrate. I was enjoying sitting there just watching him. He caught me a few times, and we exchanged flirtatious glances. Since he made fun of my feet, I found a gentle way to make fun of his hair, or lack thereof. He shaves his head, and he took my jokes with a smile. I didn’t have room to talk however, as my hair is receding as well. I’ve just done a good job of hiding it. We were having fun poking fun at each other.

He looked wiped out. He was supposed to be meeting his friend that evening for dinner. He got a text to come to his friend’s hotel for drinks before they went out. He was torn. He was entertaining the idea of going back into the park to take a nap. I told him he needed real rest before he went out, or he’d be no fun. I suggested he decline drinks at the hotel with his friend so he could take a nap and be more of a human being for the rest of the night. (By the way, I wasn’t worried at all about this friend. I’d seen pictures, and he certainly was not the type one hooks up with). Smiles agreed with me, and we made a move for the door.

When we got upstairs, we were heading in separate directions. I asked him for more details about his upcoming film screening in the Hamptons in conjunction with the film festival. I was heading out there for a wedding that same weekend, so I contemplated supporting him by attending the screening of a feature film he worked on. I was still feeling him out to see if he actually wanted me there, or if I was going to be in the way or a distraction. We exchanged a quick kiss, and I said goodbye.

The run hadn’t gone exactly as I planned, but it was still nice to get to spend time with him again. I always relish getting to see him and his smile. It never fails to brighten my day.

This entry was posted on November 11, 2011, 10:00 AM and is filed under Gay Dating. You can follow any responses to this entry through RSS 2.0. You can leave a response, or trackback from your own site.