I’m not gonna lie. I was nervous. I don’t get nervous very often, but I wasn’t quite sure the situation I was walking into. 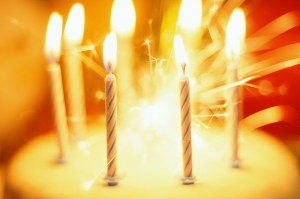 Smiles had his birthday at The Jimmy, a rooftop bar at the James Hotel in lower New York City. As nervous as I was, I set no expectations going in. I didn’t want to concoct all these crazy scenarios in my head, only to not see them play out.

The morning of his birthday party, I put A LOT of thought into what I was going to wear. I care about what I look like on a daily basis, but there was so much more going on here. I was nine years his junior, which meant many of his friends would also be a fair amount older than I am. I wanted to make sure I didn’t look like “who brought the child.” I tried on numerous permutations of clothing until I finally settled on one I felt comfortable with. I even consulted with my female roommate who works in the fashion industry. I wanted to look mature and smart, but I also didn’t want to look like I was trying too hard. (I’d like anyone to argue against me that I don’t over-think things too much).

I finished work that day at 5:00. Smiles and I had tentative plans to grab dinner before his party if I got out of work at a decent hour. When that time came, he was unable to keep those plans. He had a lot of things he still needed to do before the party, so he told me we would grab dinner with one or two others following the birthday gathering. I found something to snack on, and when the time came, I leisurely walked downtown to the hotel. 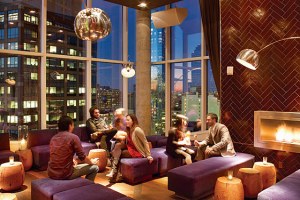 I had never been to there before. When I arrived I had no idea where I was going, which only heightened my anxiety. Finally I reached the rooftop bar and was able to find Smiles standing out on the deck by the pool. I walked up to him and was welcomed by an embrace, no kiss. Still early in our “relationship,” and not fully knowing the situation I was walking into, I didn’t initiate a kiss myself.

After a minute of small talk, I walked to the bar to grab an adult beverage for myself and a soda water for Smiles. I learned the night before he was not going to be able to participate in the libations due to the cleanse he was going through for his Ayawaska ceremony.

When I returned, he had a glass of champagne, which he felt obligated to sip since someone purchased it for him. I held on to his soda water for him until he needed it. He began introducing me to the friends he was speaking to at the time. He simply introduced me by my name, or a few times, “This is my friend,” and then my name. I had no expectations, but I was curious how I would be introduced. Certainly not boyfriend, but maybe as the guy he’s been seeing? No dice.

Early in the night, Smiles introduced me to one of his friends. This guy was younger than the majority of the crowd, and I made him buddy for the night. We hit it off and shared similar senses of humor. I knew Smiles would be preoccupied all night with his guests, so I prepared myself to be more social than I normally am. I didn’t want to be a wallflower or that creepy guy that lurks around and talks to no one. I was happy to have found someone to pal around with for the night. 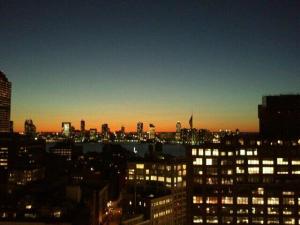 Then the question I was dreading all night came up. My buddy asked me, “So how do you know [Smiles]?” I simply replied, “Recent friends.” We both smiled big, and he looked at me with a perplexed look. “That’s all I’m going to get?” he asked. I took a second, cocked my head to the side as I thought about it, and simply replied, “Yup.”

I then turned the question on him. Apparently they met on Fire Island and were just casual friends now. I wasn’t sure of the timing of this, but my instincts told me they hooked up at one point. To any normal guy, these things don’t pop in their head, but Smiles and I did meet on Grindr.

As more friends of the younger sect (all probably about five years older than me still) started showing up, my buddy and I began chatting with them. The question came up many more times asking how I knew Smiles. When others answered, there were a few “mutual friends,” but there was also a, “the old school way — Craigslist.” My brain was in motion. In my mind, my stock plummeted right then and there. Obviously he was still close with these guys if they were coming to his birthday party. Was he still seeing any of them. We were by no means exclusive. But, seeing these guys in person made me uncomfortable. However, I soldiered on.

It had been a while since I saw Smiles, so I circled back to him. He was starving. I offered to grab him something to eat just as he was simultaneously asking me to (keeping in mind his special dietary needs on top of the new ones for the cleanse). He pointed out “his” waitress for the night. He handed me his credit card, and I ordered him some tuna tartar tacos. When they arrived, he scarfed them down as to not miss a minute of his party. I was happy I was the one to which he turned to take care of him. He enjoyed them so much, he went back for seconds.

When I returned to my conversation circle, my buddy had departed. I was very disappointed because I wasn’t thrilled with anyone that was left. However, I continued to make small talk for the remainder of the night. 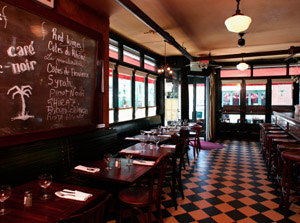 The time came to grab dinner. Smiles gathered a small group of about seven of us. We walked across the street to Cafe Noir and grabbed a table. Smiles sat at the head of the table, and I made sure I snagged the chair to his right.

The whole time at the restaurant, Smiles felt a little distant. I began to read far too much into that. I wondered if he was doing that because someone else would be offended if they saw him being affectionate towards me. Was there another “me” at the table? I was shocked I got an invite to his birthday gathering so early on. Who’s to say there wasn’t someone else in the exact same position?

I had my hand casually under the table and was rubbing his knee periodically. I wanted to see how he’d react. Nothing. I was a little hurt and confused.

I wanted to make a good impression on his friends in front of him. I was able to contribute greatly to the conversation over dinner. I attentively watch the news and stay up on current events, so I was actually the local authority on the topic of conversation. I wanted to prove to him I could hold my own.

When dinner ended, we walked outside in a large group. Many of his friends were going to smoke and invited him to join. He declined (the cleanse) and said he was going home. They also specifically asked me if I would come, but I too declined. I was hoping I was going home with Smiles. We split from the group and walked towards his place.

We weren’t a block away before he said, “Do you mind if I throw you in a cab instead of walking you up to the PATH since I don’t have a jacket and I’m freezing?” Apparently I would not be going home with him that night. I assumed he would invite me back to his place considering it was 1:30am. I even brought a spare shirt to work that morning for the following day should I be spending the night in the city. That wasn’t going to be the case.

At that point, I said goodbye to him on the street and began my trek up to the PATH. I was dreading my commute home since everything runs on a sparse schedule at that hour of the morning. 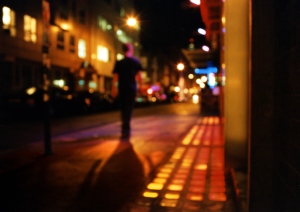 It also turned into a very long solemn walk because I was very disappointed with how the night played out. I felt so far away from him. A few nights prior, I thought I made so much excellent headway with him when I got an invite, but after the event, I had a very different picture in my head.

I tried not to let it get to me, but I can’t lie. It ate away at me for the rest of the night and into the next few days. I’m sure the fact that I had about six Johnnie Walkers didn’t help. At dinner the night before, he casually mentioned taking me to the opera that Saturday, so it was planned I’d see him again, and soon. But, it was mentioned so flippantly, I wasn’t sure I was officially invited. So many crazy ideas were floating through my head.

I was trying to follow friends’ advice to make myself a little less available to him. I was told I should make him seek me out, instead of the usual me seeking him out.

With that, I attempted to go about the rest of my week without driving myself insane, but that wasn’t going to be easy…