Roughly one block away from my date with Dr. Nice, I began texting another guy I had on standby for a date that evening. I wanted to see if I could use my time wisely and see two guys on my free Friday evening. It would help cut down the roster if they weren’t quality guys. The story I told him was that I was out to dinner with clients, and I would get in touch with him as the dinner was ending. 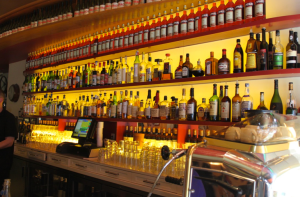 We found each other a few days earlier, and we agreed to meet in Hell’s Kitchen, but never picked a specific location. As I walked south on 9th Avenue after my first date, I found out he wasn’t far. I told him to head north on 9th Avenue, and we would meet in the middle. We could pick somewhere in the neighborhood to grab a drink.

As I was walking, I realized how bad that idea was. We never met before, and there was a good chance we would walk right past each other. I picked a bar, Nizza, and told him to meet me in front of it.

He walked up with a smile from ear to ear. He was somewhat attractive, and when he opened his mouth, his Latino background was screaming at me. I have nothing against it, but I also don’t have much in common with the typical culture. 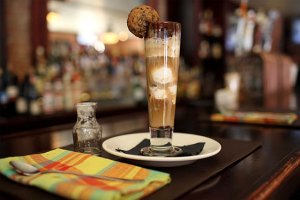 We grabbed a seat at the bar and ordered a few cocktails. I ordered a Dark and Stormy Float. It was a very interesting drink with the twist of Rum Raisin ice cream. I love Dark and Stormys, but I wasn’t thrilled with this concoction. My date insisted I order something else, but I insisted I would finish it. He enjoyed his drink while we talked about what brought him from Miami to New York. He was working as a producer on a Hispanic television news show, and was looking for a change. He wanted to move to New York and was afforded a job transfer.

It was interesting to learn he was in the city only four months, so he hadn’t yet experienced the changing of the seasons. He wasn’t quite used to the phrase “the end of summer.” As we talked, the conversation began to take shape as me giving him advice on how to adapt to New York City and less about us and any future we may have.

He told me all about being brought up in Miami and how he is going to miss being so close to his family. However, he was thinking about his career and needed to move up in this world. Surprisingly, he was living in New Jersey as well. I knew this bit of information earlier and asked him to meet on the other side of the river, but he explained where he lived and how it would be difficult to meet over there since he had no car. 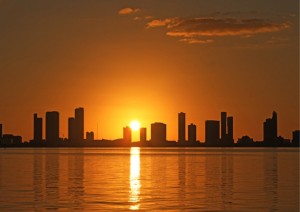 The date was very pleasant, just as my date earlier that evening, but I wasn’t feeling a spark. When this date ended, I would not have a burning desire to see him again.

We closed our tab, and I agreed to walk him to Port Authority. I was heading there myself to go back to Hoboken for the night. Before he hopped on one of the shuttles, we exchanged hugs. He suggested we find the time to meet up again. I told him we would be in touch and manage to figure something out in the near future.

Of course, he was yet another man who would fall by the wayside due to lack of interest on my part. He was a nice enough guy, but there was nothing there to really draw me in.

It seemed I was back to my old ways of serial unsuccessful dating. I needed my luck to change, or my self-esteem was really going to land in the crapper…

This entry was posted on October 7, 2011, 10:00 AM and is filed under Gay Dating. You can follow any responses to this entry through RSS 2.0. You can leave a response, or trackback from your own site.