Was that a Date?

I first downloaded Grindr as I was pushing back from the gate on my flight to San Francisco for business. Upon my return, I often played around with it at work. Early in my Grindr experience, I found a VERY sexy torso to strike up a chat with. The guy seemed very level-headed and not simply interested in hooking up. I also discovered he worked across the street from me.

But, when I asked him to hang out, he got very shy. He told me he was very picky and wasn’t that interested in meeting someone. I asked if he would grab a drink after work sometime, and he kinda let me down easy. Periodically, I messaged him after that just to say hi, but I never got much of a response. It was disappointing. Finally, I gave up.

Then one day, out of the blue, he messaged me. He asked if I had just been in Bryant Park sitting on a park bench for lunch. I was impressed and thrilled he recognized me without having met me. Ironically enough, I was on a lunch date with someone from adam4adam.com.

We chatted about the chances of him picking me out of a crowd in the city. I brought up the idea of getting a drink together. A month passed by since the last time I asked him. This time he was ready to play ball, maybe since he saw me in person? Not exactly sure. Either way, I convinced him to send me both his number and a picture of his face. At this point, I’ve had so many guys’ numbers in my phone, I needed some way to keep them straight (the first sign I was becoming a whore). My strategy was to get pictures of them to attach to their contact profile. I’m much better with faces than names. 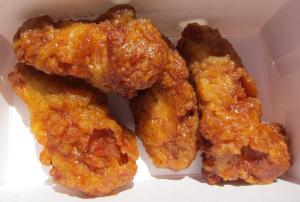 A week later, on a whim, I sent him a text asking if he would be interested in grabbing lunch that very afternoon. I knew it was a long shot since it was such short notice, but why the hell not. Much to my surprise, he agreed. I had to run into a meeting, but would be able to meet immediately following since my work for the day was pretty much over. I told him to pick a spot. He told me he’d get right on it.

We met in the square between our offices and walked to KyoChon for some excellent wings. I had never been there before, so he explained all the ins and outs to the place. We took our food and grabbed a table upstairs.

He was great company. The conversation started immediately when I met him. The whole walk over we chatted about careers and how we got where we are today. The conversation still flowed while we ate. There were no awkward pauses or hiccups. I was very comfortable with him. He also had a great smile, something I’m coming to find is a weak spot for me. Ironically enough, he looked like Boston, had the same name as him, and he recently moved to NYC from Boston. The resemblance was a little uncanny, but I moved past it quickly. 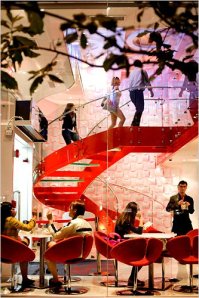 I had a lot of respect for him. He left a very successful job at a law firm to come to NYC to find himself. He wanted a new job, but didn’t know what he wanted to do. He just knew he wasn’t going to find himself in Boston. Right now he was working in marketing, but that also wasn’t exactly what he wanted to be doing. He was still on the path to clarity.

We also talked about therapy. He was seeing a psychologist from time to time to talk through issues. He told me most people don’t realize it’s covered by most insurance companies to go for periodic sessions. He explained how it’s been a good outlet for him to get his head straight. I didn’t see him as a crazy person. I actually saw him as more sane for having such a healthy respect for it. I began to entertain the idea myself. My friends are my therapist. I have abused many of my friends in this respect and turned to writing a blog to alleviate some of that burden. Maybe a therapist was what I needed.

This was truly a quality guy. A guy I really wanted to get to know. I knew I would need to take it slow with this one. I didn’t want to come on too strong and turn him off right off the bat. We walked back towards our offices and said goodbye with a nice handshake. He turned and said, “This was good. We should definitely do it again!” I was very happy. I passed the test. Also, was this a successful “date?” It didn’t quite feel like it was a date going in, but maybe it was a lunch date by the time we were done. I was looking forward to our next.

As time passed, I didn’t push the issue of a second “date.” I also became distracted with other guys, but one day, while going through my contacts, I discovered him again. I shot him a text asking if he’d want to grab lunch again soon. He told me he was out-of-town for the week, but we would touch base when he got back the following week. Only time would tell if we’d figure it out…

This entry was posted on August 22, 2011, 10:00 AM and is filed under Gay Dating. You can follow any responses to this entry through RSS 2.0. You can leave a response, or trackback from your own site.