I’d been talking to “HR” for quite a while. We started on a4a, and quickly exchanged numbers. We texted periodically and tried to set up a date, but it always seemed to conflict with one of our schedules. He was out of town on business, but when he came back I’d have to go away.

One Saturday, he went up to Providence to see Sara Bareilles in concert, and we texted for the majority of the day. By the time he was on the train coming home, we finally set up a date for the following Monday. I suggested Arriba Arriba for margaritas, and he quickly agreed, and we set a time.

I got there before him, so I carefully selected a two-top facing the door in the corner of the restaurant for privacy. When he came through the door, he found me immediately. After apologizing profusely for being late, and for bringing his briefcase and laundry with him (since he was doing so much business traveling), we dug into a bowl of guacamole and frozen margaritas.

The conversation began awkwardly, but we quickly became much more comfortable with each other. We talked about work for a bit, and then moved the discussion to stories from adam4adam.com and Grindr. He had his horror stories, and I was beginning to build up quite the portfolio of outlandish responses from men. 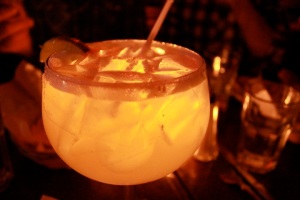 In the middle of the date, I really started sizing him up. He was a really nice guy, and he definitely had a very stable and successful job in human resources. I was also intrigued by his musical background. I never really felt strong chemistry, but he was worthy of getting to know better. We had some good laughs and continued the conversation for three hours. By then end of the date, I was staring at his lips while he spoke wondering what they felt like. I couldn’t wait to experience them with at least a goodnight kiss. Finally, I asked if he wanted to get out of there. He was heading uptown, and I was walking down to Port Authority to catch a late bus home. We said our goodbyes a block from the restaurant.

Goodbyes have always been my biggest weakness. I’m terrible at making the first move. I didn’t know how well the date went. I wasn’t sure if he was interested or just polite. So when the time came, we hugged, and I awkwardly said, “I’ll be in touch.” He looked at me puzzled, and I immediately realized what I did. I recovered quickly by saying, “Yea… I’ll have my people contact your people.” We had a quick laugh, and he hopped in a cab.

While walking to the bus, I decided to text him. “So I’m going to break dating 101 rules since that’s my style and text you right now, but I had a great time tonight!”

Coincidently, he texted me at the very same moment, “It was seriously so great to meet you! In the spirit of being honest, I found you to be incredibly sexy and attractive but was trying to behave.”

Immediately, a wave of disappointment ran across my body. Why can’t I ever muster the nerve to go in for the kiss? The only reason I was able to plant one on Boston in Miami was because I was properly lubricated. So, I immediately responded with a text, “Next time lay one on me.. I get a bit shy… Only regret of the night was not kissing you goodnight…”

To which he responded, “Please. I’m about to turn this cab around and come to port authority. Now I know for next time (and there better be a next time).”

This entry was posted on May 25, 2011, 10:00 AM and is filed under Gay Dating. You can follow any responses to this entry through RSS 2.0. You can leave a response, or trackback from your own site.