Monday morning, after a long Pride Weekend, CK and I woke in my bed. As per usual, I woke to the feeling of his lips pressing against mine. It was raining outside, and all I wanted to do was cuddle with him for the rest of the day. That wasn’t an option. Bills had to be paid, so money had to be made. We got out of bed and went through our morning routine.

I liked our morning routine. We’d hop in the shower together while listening to music and talking about what we had on our plates for the day. It started out as something fun and sexual, but it really turned into a bonding moment for us every day. I looked forward to our shower chats. On days we were both struggling, we’d simply lather up next to each other not saying a word, simply exchanging periodic gentle kisses. I’ve also never had such a clean back as I did since we started this.

After we showered, we got dressed and ate breakfast while watching Chelsea Lately. This had also become a part of the morning routine. Either I’d make some breakfast with the wonderful help of my sous chef, or we’d each pour ourselves a bowl of Reese’s Puffs, Kellogg’s, or some other cereal.

That morning, I wouldn’t be able to ride the PATH with CK. I had an allergy shot, so I had to say goodbye to him in front of the doctor’s office in the rain. I began missing him almost immediately.

Later that day, we chatted while at work. Since he’s my boyfriend, he knows all about the blog and is an avid readers. This particular day, he enjoyed the blog but had some critiques to deliver as well. 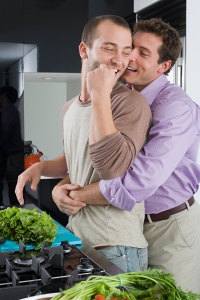 It was turning out to be the new norm for us. This was a typical day. When I finished work, I went to his place to spend the night. We were going to make dinner together, but he was constantly distracted by the television. I liked when making dinner was a team effort. I resented it a lot less. I pointed this out to him, but deep down I’d come to accept this about him. Cooking wasn’t his strong suit — It was mine. Whenever I made food for him, he greatly appreciated it, so in turn, I appreciated making it for him. I just didn’t want it to become my duty.

After our discussion, he came back to helping me while we both chatted with his new roommate who was sitting on the couch. I liked the new guy. He was very sane and likable, which is more than I could say for some of his other “roommates.” There was always a slew of people there, and they were quite the cast of characters. This guy was very normal and easy to have an intelligent conversation with.

Once dinner was prepared, we ate while watching TV and went to bed. I have always shot to be in bed around 11:30. As I get older, I find I need closer to eight hours of sleep. CK, on the other hand, had a harder time falling asleep at that hour. He needed a book or to watch Rachel Maddow or Game of Thrones on his iPad to fall asleep.

Our routine continued. Tuesdays after work, we went to yoga in the park. After yoga, we’d try to catch a free movie using my friends’ movie passes. Some nights we’d stay in and cook, and other nights, we’d have food delivered or burn up a Groupon or Living Social.

Some mornings we’d fool around before work, and sometimes, we’d have our romp between the sheets before bedtime. However, no matter what time it occurred, it was always great. Sure, we weren’t having sex as often as we did the first month we were together, but that certainly doesn’t mean it was lacking or of any lesser quality by any stretch of the imagination.

One night when he wasn’t feeling 100% and mentioned going to the doctor, I offered to go with him. As we discussed it, I began to tear up a bit. I started thinking about domestic partnership, and I got a little choked up and began to tear up. I never loved anyone before, but I truly loved this man. The thought of something serious happening to him and not being able to be with him because of legalities rocked me quite a bit. He consoled me in the way he does when I get overly emotional, and everything was fine again.

We slept together almost every night, whether in my bed or his, and woke up feeling secure and happy knowing the other was inches away. I found it hard to sleep when he wasn’t sleeping next to me. Some mornings, it was a real treat for me because I got to wake him up with a kiss.

It’s funny to write this and realize how much we sound like an old married couple. We found a routine and got very comfortable together. If it weren’t for things like circuit parties the weekend before, I’d say we may have become a very boring couple, however, I wouldn’t trade it for the world. Of course it was fun when we hung out with my friend and his friends, but nothing made me happier than just hanging out with my man. I loved him dearly, and he was everything I needed.