Saturday morning, I woke up without an alarm and laid in my bed. I picked up my tablet and began checking my emails, Twitter, Facebook, and finally, my adam4adam.com profile. I received numerous messages, as usual, but mainly from old men and thugs. However, there was a message from one guy in particular. He started off by telling me I had a great body, which is always a plus in my book.

His messages had a certain sass about them. I really liked it. I can really appreciate a man who knows how to verbally spar. There was also some heavy flirting going on. He said, “Can you drop that towel?” I replied, “Haha. Do you know how many people have said that to me?” To which he responded, “Yeah, but do they also ask you to turn around and pick it right back up? I wanna see it all! 😉 “He pointed out we chatted before on Grindr. The conversation never went anywhere, but there was nothing that showed it to be a failure. We chatted earlier in the month about where we lived and where we went to the gym.

In one of my pictures on a4a, I am seated on my motorcycle. He was very turned on by this and told me he wanted to go for a ride sometime. Through the course of the conversation, I also learned he taught flight lessons at a nearby airport. I made a deal with him that he could ride on the back of my motorcycle if I got a ride in his airplane. I told him I would drive him to the hanger at the airport, and we could reenact some scenes from Top Gun.

He did one better than that. He offered to fly me to mid-state New York for lunch, with the possibility of handing over the controls. Learning to fly has always been on my life’s to-do list. I was thrilled! I assured him I wasn’t just attracted to him for his flying abilities. He suggested we go out for a drink sometime and suggested a biergarten in Jersey City. He told me to check it out online and let him know if it was my speed. When I told him I’d been many times, he was elated because many of his friends felt it was “too straight.” I explained to him how “straight” I was, and assured him the biergarten was not a problem. He added, “Even if no attraction you are someone I think I can hang out with ;)”

After chatting more, I realized I really liked this guy. He had great energy, and he was a complete gentleman. I was excited to meet him, so, although it was raining, I suggested we grab a drink that day. He had a lot he needed to do, but agreed to meet up later. He conveyed to me on a miserable day such as we were having, he would stay home and cook dinner. He offered to cook me dinner at his apartment, but suggested we grab the drink first to make sure we’re comfortable with each other. I happily agreed.

Later that evening, he picked me up in his car to go to the bar. We weren’t even a block before he turned to me and asked, “So do you feel comfortable with me?” I loved his honesty and candor. It was just my speed. 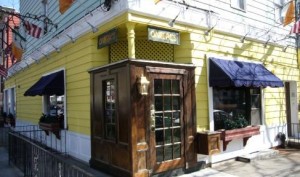 We arrived at one of my local bars, O’Nieal’s, and each ordered a beer. Over small talk, we both gulped our beers. It was obvious we were attracted to each other, and I thought he was a great guy. He was definitely worthy of making me dinner; especially after learning he also went to culinary school. Over beers, I also learned he is a flight attendant, but is only a few short months away from becoming a pilot for a major airline. I liked his sense of initiative and goals. It was a turn-on.

I paid the tab, and we drove to the liquor store to get beer and wine. On the way, he turned to me and said, “Just to be up-front and honest, I want to tell you I live with my ex-partner. Is that an issue for you?” I told him it wasn’t. If there was something going on there, I doubt he would have brought it up. Once again, his honesty and candor were rather refreshing. At the liquor store, he wouldn’t allow me to purchase anything. “You bought everything for dinner. The least you can do is let me buy the booze!” I insisted. He refused

When we arrived at his apartment, first, I was shocked by how close in proximity we were to my apartment, and second, his apartment was gorgeous. He slipped into something more comfortable and quickly gave me a tour while we talked about his job and his roommates.

We made our way to the kitchen to start on dinner. I love to cook, so I asked if there was anything I could do to help. He told me, “Just sit there and keep me company. I’m really enjoying having you here.” He told me the menu, and I was duly impressed. Fillet mignon, lobster tails, spinach and bacon, grilled onions and caesar salad with dressing made from scratch. I was really enjoying watching someone else who enjoyed themselves so thoroughly in the kitchen. I was happy we both shared a passion for food and cooking. I could watch him cook for hours. I was becoming more and more attracted to him by the second.

The conversation while he cooked was very special as well. I learned a few things about his previous relationship with his roommate and his feelings on monogamy. As I got to know him, I realized there are good gay men out there. He gave me hope. Just when I thought he couldn’t get any better, he walked towards me with a beckoning finger so he could give me a kiss. It was, to say the least, magical. He was a great kisser and the gesture was perfect. I was swooning. Already, this was the best date I’ve ever been on, and we weren’t even half way through it.

After going out to the grill to flip the steaks, he came back in and sat on my lap. We made out a little bit, and I truly learned how good and passionate a kisser he was. I didn’t want to stop.

When he finished making the meal, we took our plates and made our way into the living room to eat. Everything was DELICIOUS, including him. I couldn’t thank him enough. No man ever treated me this way before. It made me realize the potential of a real relationship with a man.

When we finished eating, we moved on to desert. We started making out on the couch and really began to enjoy ourselves. When we were down to our underwear, we took a quick break for him to ask me which position I was. When we discovered our compatibility, we made our way down the hall to his bedroom. He stripped off his briefs as we walked, so I followed suit. He was super sexy, and I was excited to be heading to his bed. I was really into this guy on so many levels.

That night, we had great sex! I was impressed with myself by how easily I made him climax. The chemistry was there both in the bedroom and out. I was head-over-heels for this guy with each passing minute. When we had our fill, we set an alarm for me and fell asleep spooning.

The next morning, when we woke, I was feeling particularly horny and frisky. I wanted to go for a second round, but I don’t think he was on the same page. After a short make-out session, he offered to make coffee and breakfast. He had already done enough. There was no way in hell I was allowing him to make me breakfast, but I would take a cup of coffee. After we cuddled on the couch a bit and he showed me some videos from his flight classes, he drove me home so I could get ready for work. Of course, I went to work late that day, and it was worth every second.

That day at work, we texted a bit. When the time came, I said goodbye and told him to be safe on his flight that evening. I couldn’t wait for his return and the possibility of seeing him again. I wasn’t completely sure where his head was, but it seemed like he was equally excited as I was at the prospect of a second date. This was just what I needed to help me forget about Pillow. Even if I never saw him again, I learned that the type of guy I am looking for really does exist out there. I was just hoping there were more like him our there. Either that, or I really hoped I finally wrangled my unicorn!

This entry was posted on September 13, 2011, 10:00 AM and is filed under Gay Dating. You can follow any responses to this entry through RSS 2.0. You can leave a response, or trackback from your own site.