Just when I was doing well and turning my back on my whorish ways, I got sucked back in. At work Friday I received another one of N‘s annoying, yet typical messages that pushed my buttons. I was still coming off the high from Wednesday’s successful date. He always knew just the right moment when I wasn’t thinking about him at all to poke his finger in my face with a sarcastic comment I was just expected to slosh off as a joke. On Thursday, through my blog, he managed to figure out who I had sex with while we were dating. He sent me a screen grab of his Grindr and asked if I recognized him. On Friday, he apparently wasn’t done talking about it and felt the need to bring it up again.

I can remember around the time I came out when I was talking to a guy in San Francisco. He used to have random guys come over for sex periodically. This blew my mind. It was inconceivable to me. I’m sure to some of my readers feel the same way. But now I was that guy. I’m not saying I’m not ashamed of it by any means. But it has become an easy way for me to get off, and it’s something I need to stop doing. Just not that day.

After my roommate went out to dinner, the guy from a4a came over. He came into my room, took his shoes off and hopped into bed with me. We were making out until both our shirts came off and our naked chests were pressed together. He felt so good. He was an older guy, but he was in great shape and everything was tight and muscular. We pleased each other orally and then moved on to penetration. I pulled out a condom and he begged for me to enter him. It was great sex. His smooth body was better than I expected. I was able to make him finish without even touching himself. We both really enjoyed ourselves.

Afterwards, he hopped in my shower and washed up. When he was getting dressed, he commented on how great he thought my body was. He was pleasantly surprised I lived up to my pictures, and suggested we make this a regular thing. I wasn’t opposed to the idea, but I was still making an effort to turn over a new leaf. At least with him, it wouldn’t constantly be a new or random guy.

The next day, I went to the beach. He started texting me, “Damn bro. Don’t usually text next day, but in the shower fully hard thinking about yesterday. HOT!” It was just the ego boost I needed. He added, “Anytime you want a repeat. So close n convenient too!” This was also followed up with a myriad of sexy pictures. I scolded him for getting me excited on the beach when there was nothing I could do to alleviate the hormones.

When Sunday morning rolled around, my roommate went out with my sister for brunch, leaving me home alone. I texted my new friend with some amazing benefits to come over for another visit. Of course, he obliged. We were having yet another sexy romp when we were interrupted by the sound of my roommate coming into the apartment. He was fully aware of what I was doing, but I didn’t exactly feel comfortable with him hearing us. I suggested we move to the shower, and Mr. Smooth agreed heavily. 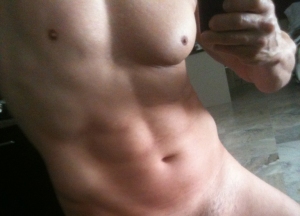 We turned on the hot water and had a hot wet time. We both finished with fireworks in the shower. When I toweled off, I checked my messages and noticed my roommate tried to call numerous times and left a text message. He just left to go surfing at the beach without me. I managed to call him and convince him to come back to get me. He was only ten blocks away. I started to rush Mr. Smooth. I felt bad, but we both knew what this was. I got dressed for the beach in one minute flat, and he quickly put his clothes back on.

As we walked down the stairs, he grumbled about the walk of shame in front my roommate, but was over it right away. As I drove to the beach, I sent a text message apologizing for the circus, but also complimented him for yet another hot time in bed. He was fine with it all.

Maybe I would keep this one around for lonely times, but I would also try to find the strength to find a real man to be my boyfriend and stop with the hookups altogether…

This entry was posted on September 6, 2011, 10:00 AM and is filed under Gay Dating. You can follow any responses to this entry through RSS 2.0. You can leave a response, or trackback from your own site.