“Are You My Boyfriend?”

After a rocky weekend with N, including him losing his phone and not finding a replacement, I had to start a new work week. I had a big pitch coming up for work and would have to travel to Denver. But, I wanted to hang out with my man before taking off.

I get myself in the habit of buying Groupons and Living Social deals in hopes of cheaper nights out on the town. When I am seeing someone, I tend to buy more because then they become excuses for us to go out to dinner or enjoy something fun and not have to spend a lot of money to do so.

The night before, we planned to use one of my deals at a local spot, Clinton Social. It would be a nice dinner date before I flew off to Colorado for 2 days. It was also nice because it’s where we went on our first date. We had a blast that night and found how much we had in common. Now that we had gotten to know each other, the chemistry was even stronger.

In the evening after work we met up at my apartment and walked to the restaurant. We sat in the back where only one other table was occupied. It was nice having semi-private dining. I get self conscious sometimes about people gawking at two men sharing a meal. I was free to not care. Every once in a while I would put my hand under the table and rub his knee. I wanted him to know how much he meant to me. We talked about our workdays and a few other things while we shared an appetizer. When our meals came, we dug in like two ravenous animals. We both enjoyed our meals and fed samples to each other. It wasn’t quite as romantic as when he cooked for me, but it was really nice dining with such a sexy man. When we finished and paid, we scooted out the back door and walked back to my apartment.

The walk back was very hot, so when we arrived at my apartment, we were both very sweaty. We decided to share a shower. I was still feeling romantic from the dinner date, so I suggested we share a bath instead. I have a very large whirlpool tub, and we’ve talked about using it before. Since it was recently cleaned, now was the perfect time. We hopped in and surprisingly both fit pretty comfortably. After a while, I squirted some body wash into the tub so we would have a bubble bath. We played with the bubbles for a while until we both had enough. We toweled off and hopped into bed.

That night, we finally had full sex for the first time. Since he was so willing to try the first night we met when we came back to my bedroom, I thought it was time I finally give it up for him. Of course it wasn’t without complications. It had been a long time since anything had gone on back there for me, so breaks needed to be taken. Of course condoms are never fun either, but they are always necessary. Once things got more relaxed, we finally found a groove, and I could tell he was starting to really enjoy himself. It was a good night. I felt we were growing much closer every day. After we were both good and sweaty and both substantially pleased, we stopped. 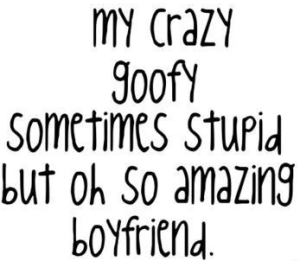 After a few minutes of laying there, N turned to me and blurted out, “So are you my boyfriend?” I didn’t know what to say. A large part of me was thrilled. I had never had a “boyfriend” before since the only other man I had been with romantically didn’t let me call him my boyfriend. However, another part of me was skeptical. We were only dating for a month and a half. Were we there yet? To me, it didn’t particularly matter. No other man mattered to me then. I wasn’t seeing anyone else. And I’ve learned to lose titles a long time ago. All this went through my head over the course of about two seconds. Right then, I said to him, “Do you want me to be?” At that point, I think he realized his verbal diarrhea. The thought was going through his head, but he didn’t really mean to say it out loud. He responded, “I don’t know.”

I decided to let that conversation die. Obviously he wasn’t ready to fully have it, and I didn’t feel we needed to discuss it yet. It was getting late and I still had to pack in the morning, so we dozed off to sleep.